The Legend of the “Eye” Part 4

There are a many number of versions of the all seeing eye that we have not covered yet. Though firstly it is important to remind the reader that previously we have mention that as people and as cultures we make symbols in order to communicate ideas. We also make symbols to help communicate and understand things such as higher truths that are not seen or hidden to ordinary consciousness. Some of these truths come from Buddhist and Hindu ideas which we have covered and related to the all seeing eye. With this instalment, we will very briefly also look at the ‘hidden truths’ behind the Aztec ‘death eye’ and the Mexican ‘eye of God’ before focusing on the all seeing eye as a protective symbol or amulet against the ‘evil eye’.

In ancient times when life expectancy was short, death was a constant companion to most people. Death and the all seeing eye sometimes intermingle. The ‘death eye’ as illustrated below is shown as a straight line that dissects through circles. This symbol is a common Aztec one that is found on numerous depictions of their gods. The Aztec had a very strong belief in the afterlife and death was something that they generally didn’t fear. To die as a warrior or in a sacrificial rite was an honour. The death eye helped symbolize that belief.

In Mexico you will find a fascinating amulet that is weaved, usually made of coloured yarn, and wound around two crossed sticks at right angles. This is commonly known as the Mexican Ojo de Dios, or the ‘eye of God’. The amulet is a magical object symbolic of the power to see and understand things unknown to the physical eye. Traditionally it was also created for celebration and blessing. Furthermore, It is interesting to note that it’s diamond shape creates four points that represent the elements of earth, wind, fire and water.

At this point we will stop and shift direction and take our story of the eye down another path. We unfortunately cannot afford to get caught up in every single story that there is about the all seeing eye. My intent is to try to stay relevant and give you a general understanding of the legend of the eye without too much baggage. Therefore, we will now focus our attention on the legend of the ‘evil eye’ and three of the most celebrated amulets of protection against the evil eye.

In many cultures around the world it is believed that good fortune sometimes attracts the jealousy of others. If you find yourself at the end of this jealously, you will inevitable receive a malicious gaze which will bestow upon you a curse. This ungrateful envious or ill wishing look is called the ‘evil eye’. Some people will deliberately go out of there way to bestow a curse on someone believing that their evil eye has magical properties that will do harm. Some cultures around the world report afflictions caused by the evil eye to be disease, wasting or even death. However, an envious person casting an evil eye, more commonly only means to bring its sufferer bad luck.

With such fear and unease, it is no wonder that in many cultures around the world, from the Mediterranean to Central America, amulets of protection are used. (Amulets are also sometimes called or known as charms or talisman.) Amulets are objects that people believe have ‘magical’ powers of protection. People can wear amulets such as pendants, rings or bracelets, but they are also objects like stones, small figures, coins, animal teeth or anything else really that protects by magical properties rather than physical means.

Roman mosaic from Antiochia, House of the Evil Eye.

During antiquity, Greeks and Romans strongly believed that there were certain types of people who possessed the ability to cast horrible curses upon individuals by simply looking at them. The evil eye was not feared equally, for example, in every corner of the Roman Empire but it was definitely felt the strongest in the East. (It is assumed that the belief in the evil eye was spread by thinkers and philosophers during Alexander the Great’s reign ? ) To combat against the ‘evil eye’, people of antiquity used all sorts of implements and animals as symbols of protection against the evil eye. We are fortunate enough to have an example of this in the below Roman era mosaic from Antiochia. The evil eye depicted in the mosaic is being attacked by a multitude of implements and amulets that were relevant in the Greco-Roman world. Firstly the evil eye is being pierced by a trident and sword, then pecked by a raven and barked at by a dog. It is also being attacked by a centipede, scorpion, a cat and a snake and If that isn’t enough, a horned dwarf with an enormous phallus crossing two sticks together is also attacking the evil eye!

Staying in the Mediterranean but shifting our attention a little further east, you will sometimes come across a strange blue eye. This is a Nazaar (Middle Eastern blue eye) or evil eye stone which dates back to times of ancient mythology. It is thought that the nazaar amulet originally derives from the Egyptian Eye of Horus amulet. The use of the blue eye stone is widespread throughout countries like Greece, Turkey, Albania, Syria, Lebanon and as far as Afghanistan. 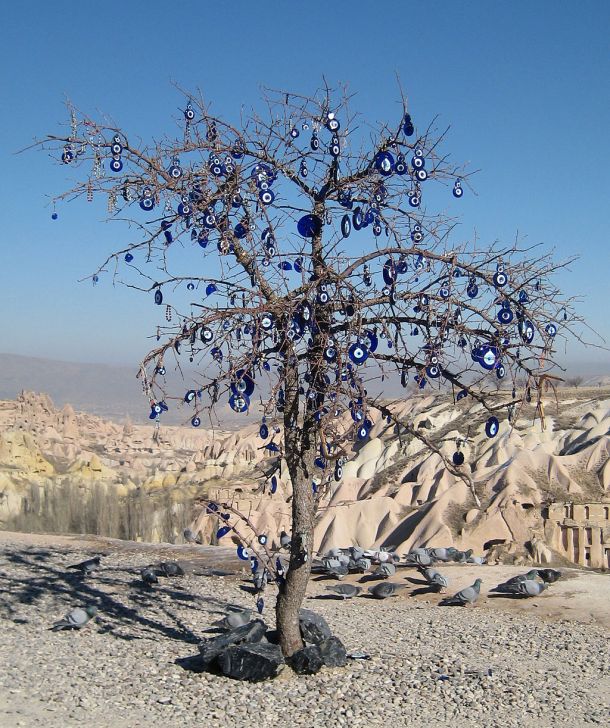 Image above of the Middle Eastern blue eye.

Travel across the Mediterranean Sea to the Middle East and you will find ‘The Hamsa Hand’. It is a hand or palm-shaped amulet popular throughout the Middle Eastern region and North Africa, and  very commonly used in both Jewish and Middle Eastern jewelry and wall hangings to protect against the evil eye. In Israel, hamsas are simply used as a symbol of good luck. They are commonly decorated with fish or Hebrew prayers. In Islam, this symbol is known as the hand of Fatima, in reference to Muhammad’s daughter Fatima Zahra. Similar in appearance as the Hamsa, it too is a symbol of power, strength and protection. Many historians believe that the hamsa symbol predates both Judaism and Islam, though no one is sure of its origin.

Melbourne indie folk band Husky’s new concept album Stardust Blues is something that we all definitely need right now. Inspired by James Joyce’s classic novel Ulysses, the album’s twelve tracks follows a contemplative character as he transverses through a city lost in his thoughts searching for love, hope and the key to the cosmos.