On the 28th of June 1914, the assassination of Archduke Ferdinand, the heir to the Austro-Hungarian throne saw the Balkans yet again erupt into bloody battle. (Only recent had the second Balkans War concluded in 1913.) Austria-Hungary blamed Serbia for the assassination which triggered a declaration of  war against her. This caused nation after nation to react, Russia backed Serbia, Germany backed Austria-Hungary and declared war on France, which led to Britain declaring war on Germany on August 5th 1914.

A world away in Australia, possibly only a few took much notice of the newspaper story about the assassination of the Archduke in Sarajevo. No one dared to imagine that this would eventually lead to Australia joining the war effort and some 60,000 Australian losing their lives.

When a cable reached the offices of the Prime Minister and Cabinet about Britains declaration of war against Germany, Australian broke out in an unprecedent manner of enthusiasm and support for their ‘mother country’ and its upcoming war effort and contribution to the Great War.

Australia’s initial involvement in the Great War was a naval and military capture of German possessions in New Guinea in September 1914. It also made a significant naval contribution when HMAS Sydney destroyed the German raider SMS Emden in November. These expeditionary engagements were a prelude of that was to still to come in the war for Australian forces, a world away on the Gallipoli peninsula.

After four and a half months training near Cairo in Egypt, Australian forces together with New Zealand, India, Britain and France departed for the Gallipoi peninsula. The goal of this operation was to assist a British naval operation which aimed to force the Dardanelles Strait and capture the Turkish capital, Istanbul.

Gallipoli often appears in many history books as a footnote to the Great War. Its influence on the course of the Great War was negligible despite great loss of life on both sides (Allied and Turkish). But it is here that the ANZAC (Australian and New Zealand Army Corps) legend was born with the landing of allied troops at what is now known as Anzac Cove on 25th April 1915.

Anzac Cove during the Gallipoli campaign.

Upon establishing a delicate foothold on the very steep slopes above the beach at Anzac cove, the allies tried in vain to break through the Turkish lines, while at the same time the Turks tried to drive them off the peninsula. An intense but unsuccessful allied attempt to break through Turkish lines for the remainder of 1915 ultimately ending in failure.

Given the numerous operation in Gallipoli, the Battle of Lone Pine stands out as one of the most significant and brutal. (It is best known as part of the “August Offensive’ which included The Nek , a mounted tragic and futile charge of the Australian Lighthorse on August 7th).

Over the course of four days between the 6th to 9th, Australian and Turkish soldiers fought on a small plateau known as Lone Pine (named after a solitary Turkish Pine that stood there at the start of fighting). Thousands of lives were lost in ugly, fierce hand to hand fighting in dark tunnels and trenches while simultaneously being bombarded by a barrage of flying grenades, sometimes thrown 2-3 times before exploding.

The Battle of Lone Pine was originally suppose to be a diversion from attempts by the ANZAC’s to force a break in the stalemate in fighting from the perimeter they held on the heights of Chunik Blair and Hill971. Beginning with an artillery bombardment stretching over 3 days and intensifying over the final hours before the infantry charge, the Australians had hoped that the Turks would have cowered into their fortifications and tunnels. Sometime late into the afternoon on the 6th after the bombardment had stopped, the 1st infantry brigade charged at the Turkisk lines, in which they initially took the main Turkish trench in reports that state as early as twenty minutes to an hour. This was only the prelude to three more days of intense hand to hand fighting that was still to come.

As the Australians arrived at the Turkish main trenches they found them roofed with pine logs, which had not been identified by aerial reconnaissance.  As the Turkish defenders recovered from the artillery bombardment, they began firing at the Australian soldiers through specially cut holes at point blank range.  As subsequent Australian reinforcements joined in on the attack, they fired their rifles, bayoneted from above and dropped grenades into the trenches through the gaps of the logs. Some men were successful enough and found their way inside trenches through gaps or by lifting the pine logs. Due to the darkness and small spaces beneath in the trenches, fighting resorted to close quarter hand to hand fighting.

Shortly after dark, the Turks first counterattack came with the numbers of dead increasing by the hour on both sides. Gripping tales of heroism and brutality echoed through the trenches that first night.

For the next three days the Turks continued to launch an unabated counterattack but in the end failed to recapture their main trench. The Australian too, could go no further resulting in an eventual stalement which lasted until the end of the campaign in December 1915. 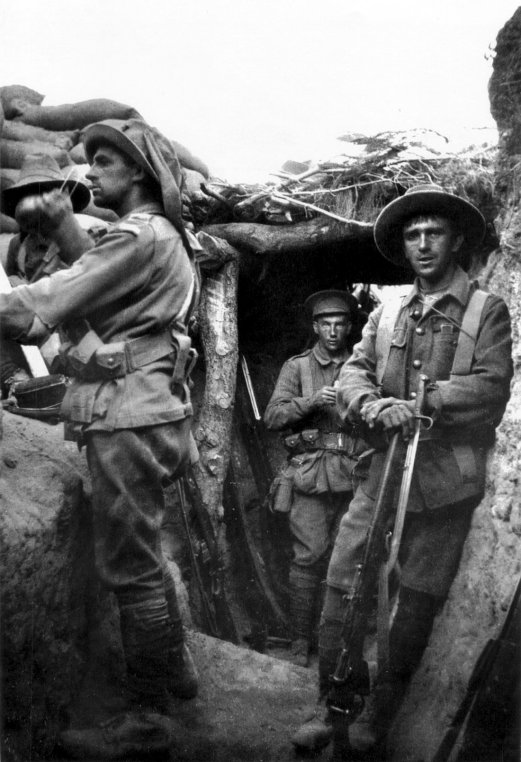 Turkish troops on parade at Gallipoli during World War I, circa 1915.

The cost of lives and casualties at Lone Pine was great with some 2,000 Australian soldier dead or wounded and upwards of 7,000 Turkish dead, wounded or listed as captured or missing in action. Seven of Australia’s nine Gallipoli VC’s recipients were also earned during this brutal battle.

Ultimately, the most successful operation of the campaign was not a single battle, but the evacuation of all allied soldiers on 19th–20th December under cover of a thoroughly thought out and amazing deception operation. As a result, Turkish forces were unable to cause any more than a very few casualties on the withdrawing allies. The entire Gallipoli operation, however, cost 26,111 Australian casualties, including 8,141 deaths.

3 comments on “The Australian perspective: Gallipoli and the Battle of Lone Pine.”