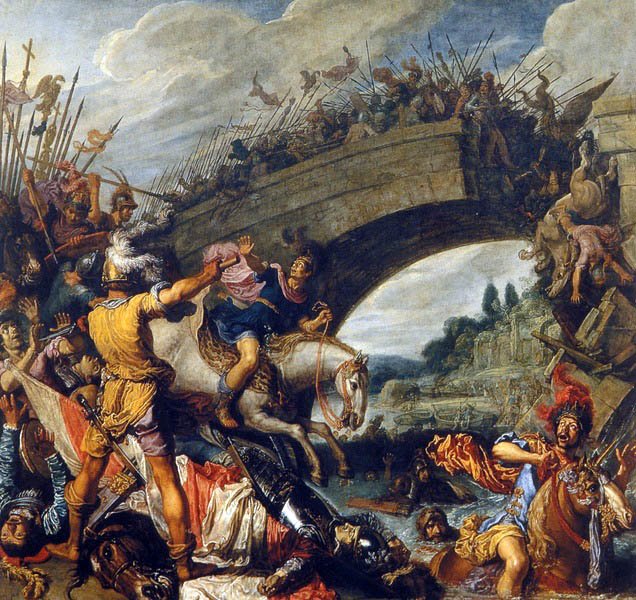 In the many months, leading to the moment that both Constantine’s and Maxentius’ armies would crash into each other, the empire was threatening to tear itself apart. Diocletian’s attempt at stabilizing the empire through his creation of the Tetrarchy, the rule of four, did nothing to quell the ambitions of those who ruled. The short lived experiment of the Tetrarchy would spiral into a grab for power.

The main actors would who struggle for control of the empire by 312 were Emperors Constantine, Licinius, Daia and Maxentius. In short all four men had come to despise each other.

In the Balkans and Asian provinces, Licinus and Daia, had both come to nurture a healthy distaste for each other. Their constant bickering over territorial control would inevitably bring them ever so closer to war. In the west, the view from Gaul, where Constantine had cemented his rule as Augustus wasn’t any better. Constantine watched how Maxentius had come to seize control of Rome and elevate himself as Augustus of Italy. This posed a problem for the ambitious Constantine. But soon Maxentius gave Constantine the reason he needed to attack Maxentius, as his rule, very quickly became unpopular, characterised by his insatiable greed. (Evidence of this came quickly when Maxentius decided to heavily tax his citizens to pay for his standing army and fund his extravagant building projects. In the process he slaughtered thousands in the process for protesting about it.)

So, with too many egos, four in fact, vying for control of the empire, the weak and corrupt regime of Maxentius would be first on Constantine’s ‘hit list’, in eliminating the men he considered inferior rulers. But before he could make any claim upon Italy and Rome, he would have to align himself with Licinius, the new emperor in the Balkans. (His brotherly union with Licinius, of course, was strategic in purpose. Constantine betrothed his stepsister to Licinius to temporarily gain his trust, so that Constantine was free to invade Italy.) Once this was done Constantine travelled through the Alps to Italy to deal with Maxentius.

When news arrived that Constanine had crossed the Alps, Maxentius broke out into a nervous sweat. It technically wasn’t the first time that Constantine and Maxentius had bumped heads with each other. On two previous occasions, the two emperors who greatly despised each other, had met on the battlefield before, with Constantine winning both hard-fought battles. These battles were not really of any great significance, but this third confrontation was shaping up to be something different. This led Maxentius, frightened by the thought of Constantine heading to Rome, to set up a camp across the Tiber river by the old Milvian Bridge to confront him.

A modern day view of the Milvian Bridge.

The two armies began hostilities on the 28th October, on the seven anniversary of Maxentius seizure of power. Legend states that both men looked to the gods for good favour, but Constantine searched for something more, a far greater sign that would help him conquer Maxentius. Constantine would famously see a vision in the sky, a great cross of light carrying the inscription “conquer by this sign”.

Whether we believe in this account or not, it still must be said that it inspired Constantine and his army to rout the army of Maxentius.  Carrying this confidence with them, Constantine’s soldiers who had been outnumber by the forces of Maxentius, pushed Maxentius soldiers southward. In full retreat Maxentius soldiers was pushed back to the old Milvian bridge, where they would cross on constructed pontoons nearby the old stone bridge and not on the extremely narrow bridge itself. With Constantine’s army feverishly in hot pursuit they crossed upon the pontoons and may have made it to safety if it wasn’t for the engineers drawing the bolts too early. The entire structure collapsed throwing hundreds of soldiers into an unforgiving Tiber river. In a panic those who had not yet crossed headed for the narrow stone bridge. Many were crushed to death, while others fell or were thrown over the bridge and drowned. In the chaos Maxentius met a similar fate and washed up on the shore the next day. His body was dragged out of the Tiber, he was beheaded and his severed head was paraded on a lance as Constantine entered Rome.

The Battle of the Milvian bridge made Constantine the sole Augustus of the west. He proclaimed that the tyrant Maxentius was dead and that a new age had begun. It also marked the beginning of a new Christian age that would weave itself further into the fabric of Roman society, beginning with the Edict of Milan in 313 AD, which made Christianity an officially recognized and tolerated religion in the Empire.

The Arch of Constantine was erected by the Roman Senate to commemorate Constantine The Great’s victory over Maxentius at the Battle of the Milvian Bridge on October 28, 312 AD.

1 comment on “A short history of Byzantium: No. 4 The Battle of the Milvian Bridge.”