NextAmazing Women Who inspire Us: Cathy Freeman
A short history of ByzantiumHistoryReligion

A short history of Byzantium: No. 8 The first council of Nicaea and its groundbreaking statement on faith.

Just as Constantine had consolidated his power, and the Empire had come together politically, a new deadly heresy threatened to permanently rip it all apart. Once Constantine had defeated Licinius in 324, there was nothing really stopping him now from coming out in the open for his support of Christianity. He would for the short term continue to tolerate paganism, but what he would not tolerate was heresy within the Church.

It wasn’t too long after Constantine had begun his ambitious plans for his new city at Byzantium (For continuity sake we will start to refer to Byzantium now as Constantinople) that he became fully aware of a North Africian priest named Arius and his teachings that Christ was not fully divine and inferior to God.

According to Arius, Jesus as the Son of God was not the same substance as God the Father. He preached that there was once a time before the Son of God, when only God the father existed. His views were originally condemned and he was expelled from Alexandria where he was a priest in 321, but in time his views gained momentum in exile.

By 325 AD, Arius’ controversial teachings had spread far beyond his own see, which caught everyone by surprise. Warring factions in the church just simply could not agree what to do with this growing menace, highlighting the distinct lack of leadership that existed in the church.

This developing rift in the church worried Constantine. Prior to the Arian crisis, Constantine saw first hand how schisms in the church could unstable things. He had battled fiercely against two schismastic groups, the Donastists and Meletians, both in North Africa and Egypt respectively. These two groups were unable to forgive those bishops or priests who had left the Church during Diocletians prosecutions and later returned to it. With these two troublesome groups firmly planted in the back of his mind and with now Arius “rocking the boat”, Constantine sought a solution. He decided to flex his imperial muscle and take control of the matter at hand personally and announced a great council, the first “Ecumenical Council’ inviting every bishop in the Empire to attend in 325 AD.

In reality, it is said that approximately a little over three hundred bishops gathered at Nicaea, near Constantinople, with an overwhelming majority of bishops in attendance arriving from the east, with reportedly only a handful of bishops from the west of the empire. Yet despite the lopsided representation of the assembly, the whole Council dutifully still went about discussing minor matters of faith from baptism, to setting the dates of Easter, the Meletian schism to the burning issue of the day – the relationship between God and his son Jesus. One can only imagine how fiery and robust debate amongst the bishops would have been. Undoubtedly, there would have been a lot of hotheads with egos to match. There were even rumours of alleged punches thrown at Arius on the council floor.

Of concern to Constantine, as already mentioned, was the relationship between the father and son. In saying that he painstakingly advised the council on the importance of unity on the matter at hand and the need to compromise in reaching a decision. And while debate was encouraged, in reality Constantine made sure that his idea of what the statement of faith should be was followed. If we are to believe what happened next, Constantine at some point bullishly wound up the debate by declaring that his version of the creed (it is said, composed by a Cappadocian priest) and the use of the word ‘homoousios’, of like substance, would describe Jesus relationship with God.

David Potter, in his biography of Constantine states that:

“It is hard at this distance to grasp the extraordinary originality of what Constantine proposed to do; there had never been a universal creed, and bishops who were used to working with their own baptismal creeds are unlikely to have seen the need for such a statement.”

Potter adds that only an experienced imperial administrator, like Constantine, would have insisted on something like that.

At first many of those bishops with semi-Arian sympathies protested greatly, but Constantine persuaded them that it was the right thing to do. Who would dare contradict him? Later, the term homoiousios, by adding an extra ‘i’ was suggested to help appease many of the bishops. Though, the controversy over the difference between homoousios and homoiousios would be agonized over the better part of the fourth century. Nevertheless, with the inclusion of homoousios ‘of one substance’ into the prepared statement of faith- the first version of the Nicene Creed was born. (The final version would not appear until Theodosius reign in 381.) It also in one swift blow sealed the fate of Arius and his supporters. He was formally condemned and his writings were ordered to be burnt by Constantine. Once again, Aruis was exiled, this time to Illyricum and forbidden to return to Alexandra (where he was a priest in 321). 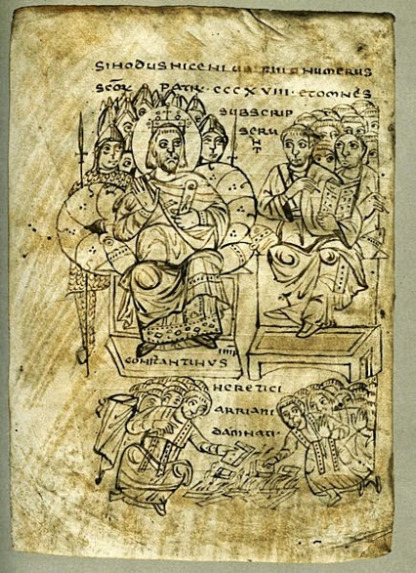 The burning of Arius books.

In reality, Arianism would plague the empire for a little while longer. Many in Constantine’s family harbored Arian sympathies, in particular, his son Constantius. For at least another two hundred years, the German kingdoms after the fall of the west would also favour Arianism. Finally, not until the sixth and seventh centuries would the last remnants of Aranism be finally suppressed in western Europe.

The Nicene Creed that Constantine had overseen then became more than just a statement of faith. It became the official definition of what it meant to be Christian, and defined what the ‘true’ church believed.

“We believe in One God, the father, Almighty, Maker of all that is, seen and unseen. And in One Lord Jesus Christ, the Son of God, begotten of the father, Only-begotten, that is from the substance of the Father; God from God, Light from Light, True God from True God, begotten not made, consubstantial (homoousios) with the Father, by whom all things were made, both things in heaven and in earth; who for us and for our salvation came down and was incarnate, was made man, suffered and rose again on the third day, ascended into heaven and is coming to judge the living and dead; and in the Holy Spirit.”   –Creed of the Council of Nacaea, 325 AD.

The Creed and the first council itself, in a sense allowed bishops to decide upon all church matters. It also defined the role of the Emperor as an ‘enforcer’, the sword arm of the church, with the capabilty and power to put a stop to heresy and protect the Christian faith against division.

Bryde’s anxiously awaited sophomore album ‘The Volume of Things’ is finally here. It is her most personal offering to date that moves the heart and soul with equal measure. Great to see her continue to cement her indie rock leanings here too that she began with her debut ‘Like An Island’.