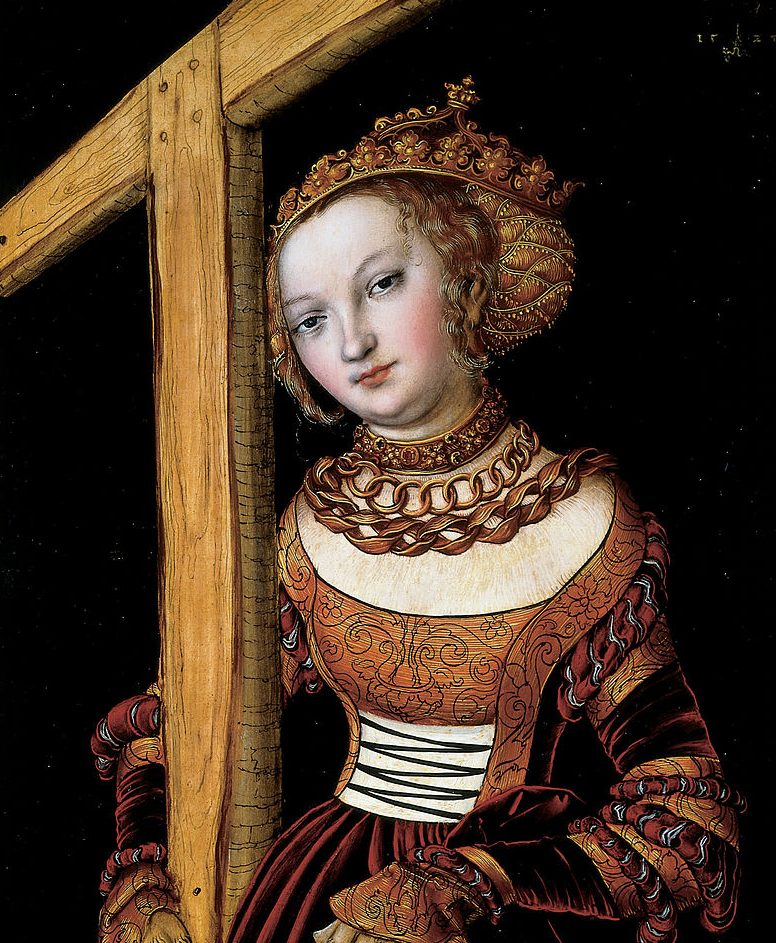 St.Helena is a revered saint amongst Christians around the world, particular the orthodox community, for her tireless work with the poor and her contributions to the early church. Though, before she was canonized, she was first and foremost, the influential mother of Constantine the Great.

We don’t know very much about her early live, expect that she probably came from a low standing. She is often depicted as an inkeeper’s barmaid, who may have also been unwillingly prostituted out by her father? Regardless of this alleged gossip, Helena was very likely a Christian early on in her life, contrary to suggestions by Christian historian Eusebius, who credits Constantine converting her to the faith.

She likely met Constantine’s father, Constantius Chlorus in around or after the year 270 CE. Whether or not Helena and Constantius entered into a legal arrangement, as husband and wife, has been debated it seems forever. Though what can’t be disputed is that Constantius considered Constantine as his true son and legal heir.

In 293, Constantius abandoned Helena to advance his career as Caesar, under Diolcletian’s tetrarchy. To strengthen his position under Western emperors Maxinianus, Constantius agrees to a more politically correct marriage to Maximianus’ daughter, Theodora.

Depending on which history you read, Constantine (now a young man) is shipped off to Diocletian court on his own, while other accounts have Helena and Constantine dispatched together, where Helena keeps a very low profile.

Helena may have been heartbroken by the events that had seen her pushed aside by Constantius, unfortunately we will never know really to what extent. Though what we do know is that she held a deep resentment towards Emperor Maxmianus’ family, firstly towards his adoptive daughter Theodora, who had absconded with Constantius in 293 and years later towards his real daughter Fausta, who became her son’s second wife. It was likely Helena who urged Constantine to take ‘revenge’ against Fausta, who had concocted a tale of lies and betrayal against her beloved grandson Crispus, whom Constantine had killed in a moment of ‘madness’.

Following Constantine’s elevation as Emperor of the West and his subsequent victories, Helena would return back to public life. She rose very quickly to prominence as Constantine’s mother and was elevated to Augusta during Constantine’s celebration of his 20th year in power. She was loyal to her son and when he commissioned her to travel to the Holy Lands in 326, to build Christian churches at sites associated with Christ, she did so with honour. But did it take a family tragedy, as mentioned earlier, for Helena to make that fateful journey? Some people suggest that by sending his mother to the Holy Lands was Constantine’s vain attempt at redemption for his crimes against his son and wife. Nonetheless, it was probably a coincidence, that a grief stricken Helena made her way to the Holy Land, where she eventually commissioned the construction of two of Christianity’s most important churches, the Church of the Nativity and the Church of Mount Olives. 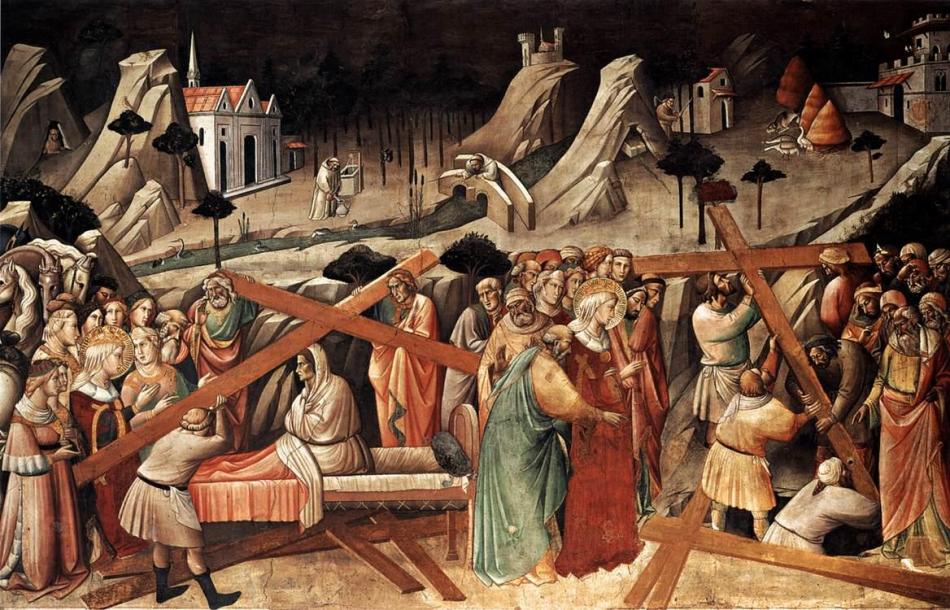 The finding of the True Cross, by Agnolo Gaddi, Florence, 1380.

It was while in the Holy Lands that she is also famous for supposedly discovering the site of the True Cross. Legend states that at one of the sites that she ordered to be excavated, three crosses were found beneath a pagan temple. Upon seeing the crosses, Helena was immediately convinced that one of them was the cross that bore Christ. To prove her case she performed a test on a woman near death. When the dying women touched the first two crosses her condition did not improve, but on touching the third, she miraculously recovered. Helena, then, declared this to be the True Cross.

Her journey and the legendary account of the True Cross over time caught the imagination of Christians across the Mediterranean and Europe. Shortly after, Christians became pilgrims to the Holy Lands to all the places connected by Helena, where she dedicated and built church after church, in honour of Christ. However, sometime around the year 330 CE, at eighty years of age, Helena died with Constantine presumedly at her side. She was buried in the Mausoleum of Helena (what was meant to be Constantine’s mausoleum upon his death) on the Via Casilina at Rome. Her body was placed inside the sarcophagus originally carved for Constantine. 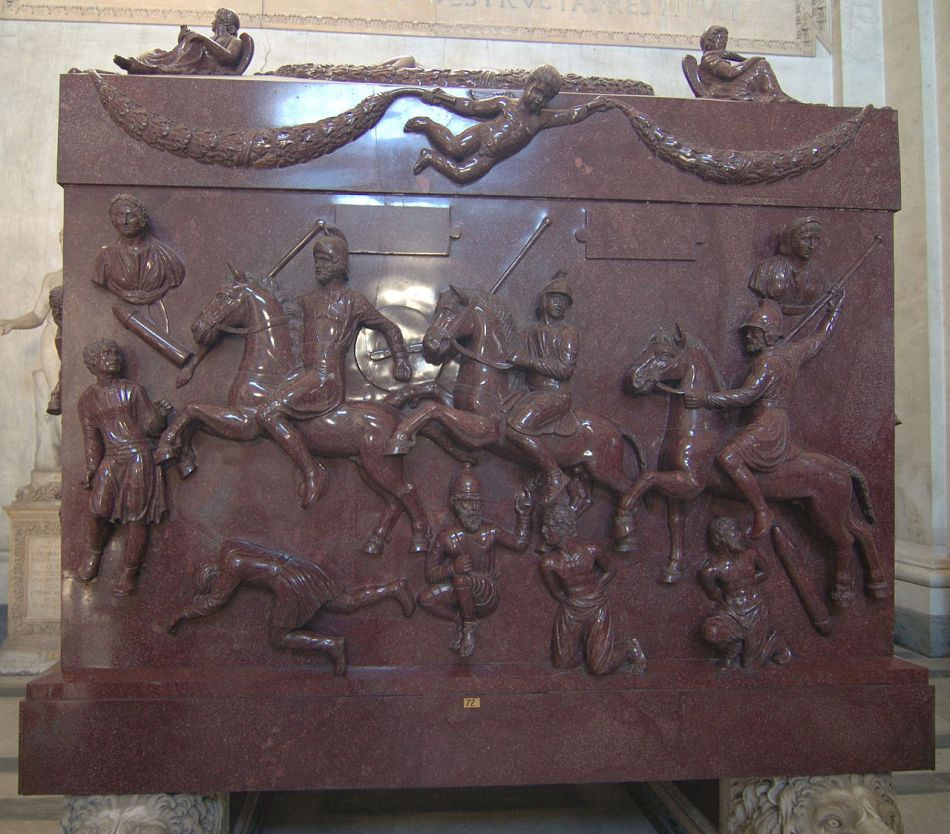 Helena’s Sarcophagus in the Vatican Museum.

The header image is a painting of St. Helena by German Renaissance painter Lucas Cranach the Elder.

0 comments on “A short history of Byzantium: No.11 St. Helena: Empress and beloved mother of Constantine I”