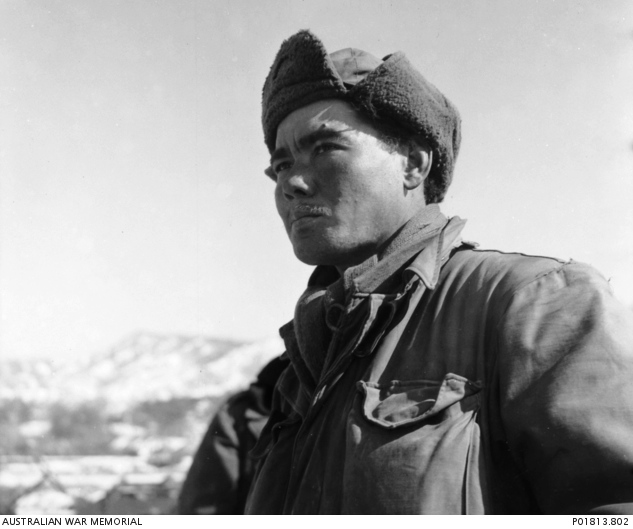 The 25th April (Anzac Day) is commemorated as a national day of remembrance in Australia and New Zealand for all those “who served and died in all wars, conflicts, and peacekeeping operations”. Our thoughts are also especially with those currently on active duty around the world. A lot has been written and spoken about the famous battles and campaigns Australians have fought in the past. Somehow, the Korean War is often overlooked and I hope to bring attention to one particular battle today. I have chosen to honour those who fought and died in the Battle of Kapyong. Today also marks its 63rd Anniversary.

On the night of the 23rd April, a Chinese army with an estimated strength of ten thousand soldiers marched through to a narrow point in the Kapyong Valley in Korea. What they didn’t know was that a small force of mainly Australian, Canadian and New Zealanders would stubbornly stand in their way. If not for the Australians, in particular, the Canadians who fought bravely a short distance to the west of the Australian position, the course of the Korean War may have swung back into the favor of the Chinese and North Koreans. Was Kapyong the defining moment of the Korean War ? Many historians recognize the battle of Kapyong as a turning point in the war.

However, before we go any further recounting this amazing battle, I feel I must briefly outline a short history of the war, which eventually led to some 600 Australians, 700 Canadians and a smaller force of New Zealanders including Americans, to face the might of the 118th Chinese Division. For that story we must go back to June 25th 1950, when the communist North invaded the democratic South, intent on reuniting their country, which was divided along the 38th parallel following the Second World War.

Soon after the North Koreans invade the south, the United States quickly entered the war with an inexperienced force stationed in Japan, followed by a UN coalition shortly after. The war, at first, didn’t go well for the South Koreans and the Americans. Before long the US was pushed back to a tiny pocket on the southeast tip of South Korea around Pusan. However, US Supreme Commander, General Douglas MacArthur, envisaged a bold plan to take back South Korea by outflanking the North Koreans with a beach invasion near Seoul’s port city of Inchan. It worked, effectively cutting off the North’s advance and forcing them into a full retreat. The idea of invading the North was now planned and carried out.

Australia’s main land force arrived in Korea in late September 1950 in Pusan. The 3rd Battalion, Royal Australian Regiment (3RAR), which formed part of the 27th Commonwealth Brigade soon found itself in action up north near Pyongyang. As part of the US led coalition, the Australians also found themselves as far as the Yalu River looking across the border into China.

MacArthur’s home-by-Christmas statement would be in vain as the Chinese first threatened to and then joined the war in late October 1950. MacArthur made threats of his own that the US would drop atomic bombs. President Truman quickly put an end to such stupid talk.

With the Chinese now in the war, entertained by Soviet aid and support, the UN coalition found itself in an embarrassing retreat. By January 1951, Seoul is captured for a second time and the controversial MacArthur is relieved of his duty by President Truman in early April. Under General Ridgeway, the UN retakes Seoul and takes defensive positions along what was called the Utah line.

It is here in the Korean War story that we arrive at Kapyong. Faced with a defensive line stretching the width of the country, the UN coalition waits nervously for the Chinese offensive that will inevitably come. 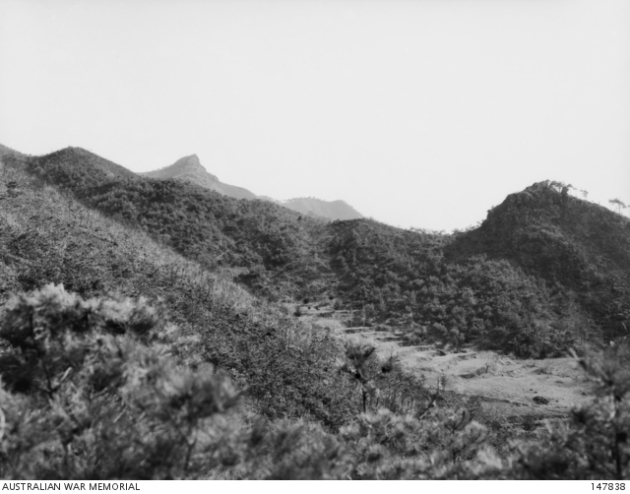 A view of the Kapyong valley, showing the positions of the 3rd Battalion, Royal Australian Regiment in the middle distance, in the upper left, and in the left foreground. Image is in public domain. Source AWM

Along this Utah line, on the 22nd April a large Chinese force destroys a South Korean Division which opens up the road to Kapyong, one of the traditional key routes that leads to Seoul.

The Australians (3RAR), who are unaware of the situation that had unfolded, were in the middle of a well deserved rest behind the Utah line, some 40 kilometres away. Reports filter through to command that they are to move up to the front to survey defensive lines. Lieutenant-Colonel Bruce Ferguson of Australia is told that the 6th Repubic of Korea Division has been overrun. Four rifle companies of the 3RRR take defensive positions around Hill 504 on the eastern side of the valley. There counterparts, the Princess Patricia’s Canadian Light Infantry (PPCLI), dig in on a larger steeper Hill 677 to the west of the Australian. Crucially in support sat the New Zealand Artillery, the British Middlesex regiment and some American tanks. 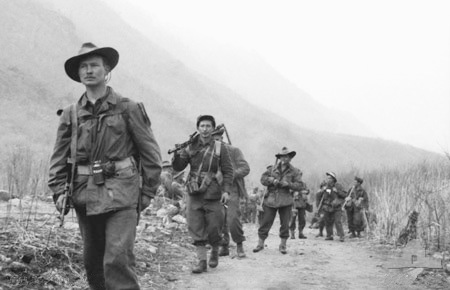 The 3rd Batallion, Royal Australian Regiment on the move in 1951.

Realising that they now hold the new front line, the Australians sit nervously in anticipation of the Chinese army. Almost immediately they notice streams of refugees coming down the valley road. Following close behind were retreating soldiers of South Korean army. The sheer panic on their faces indicated that the Chinese were almost upon the Australians and Canadians.

As evening fell on the 23rd April the Chinese attack began. Lieutenant-Colonel Ferguson’s battalion headquarters and the Middlesex Regiment and New Zealand Artillery were hit early, forcing the British and New Zealand units to withdraw into the reserve. The thrust of the main Chinese attack hit the Australians on Hill 504.

“There were Chinese everywhere, and they mounted attack after attack over the bodies of the dead and wounded…We stopped the first attack and then we waited. We knew there was going to be another one. They were aggressive, very aggressive and the only thing that”d stop them is a bullet. There were no beg (your) pardons.” – Ray Perry from the 3rd Battalion, Royal Australian Regiment.

The Chinese, almost at the same time as the initial assault on the Australians set upon the Canadians on Hill 677. The unrelenting attack on both parties disintegrated into hand to hand combat. At one point in the battle, the Australians faced almost being completely overrun after running low on ammunition. They managed to make an orderly rearguard retreat to a new defensive positions late on the 24th April. If not for the rearguard actions of four 3RAR soldiers, the Australians may have lost a lot more men.

“On Anzac Eve we dug in among friends. At last I felt like an Anzac and I imagine there were 600 others like me.” –Australian Officer, Captain Reg Saunders. 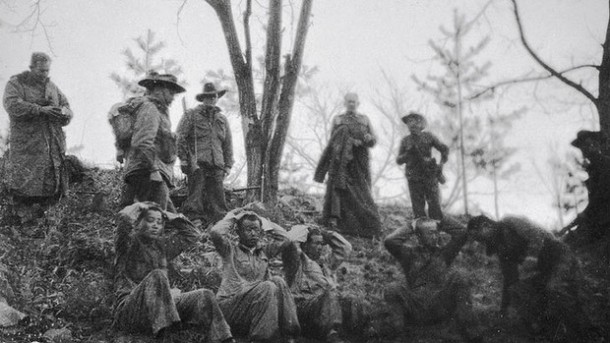 Chinese POWs at the Battle of Kapyong, 24th April 1951 captured by Australian soldiers.

Following the successful Australian withdraw, Chinese attentions focused on the Canadians still defending Hill 677. The brave men of the PPCLI were the last hope of repulsing the Chinese onslaught. At one point they even ordered artillery fire to pound their position to take out the Chinese who were amongst them.

On the last day, small attacks continued, but it was all but over. UN forces regrouped late in the battle coming to relieve the exhausted Canadians. Effective New Zealand artillery support, American tank fire and airstrikes helped dissipate the Chinese attack. By the early evening on April 25th Kapyong was saved. 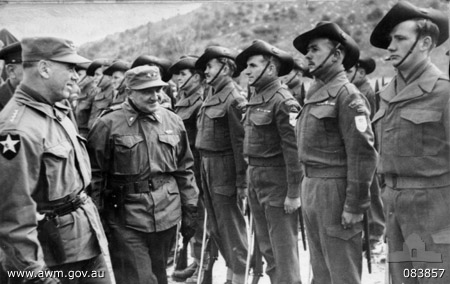 US General Van Fleet inspects the 3 RAR battalion after awarding the unit the Presidential Unit Citation.

For both nations, Australia and Canada, Kapyong came to be the most significant and important battle of the Korean War. It showed the UN coalition of countries (around 20 in total) that its reputation as a very well trained, skilled military force was well deserved. For their gallant efforts and contribution in the stand at Kapyong, the 3rd Batallion 3RAR, the Canadians and a company of the US tank battalion were awarded the US Presidential Citation.

In the aftermath, Australia lost 32 men in the battle, with 59 wounded. The Canadians lost 10 men and 23 wounded. Casualties and losses among the Chinese 118th Division was around 1000 killed in action with an unknown number of wounded.

Following the battle of Kapyong, the Korean War was to last another two years in a long stalemate as the Communist force and UN coalition fought over small gains not far from the 38th parallel.

Photo Credits: All images used have been released into the public domain and are courtesy of the Australian War Memorial. The header image is Sergeant S.K.J. “Len” Lenoy, who was killed in action at Kapyong while commanding a machine-gun section with A Company.

5 comments on “The Battle of Kapyong: A forgotten battle, in a forgotten war.”