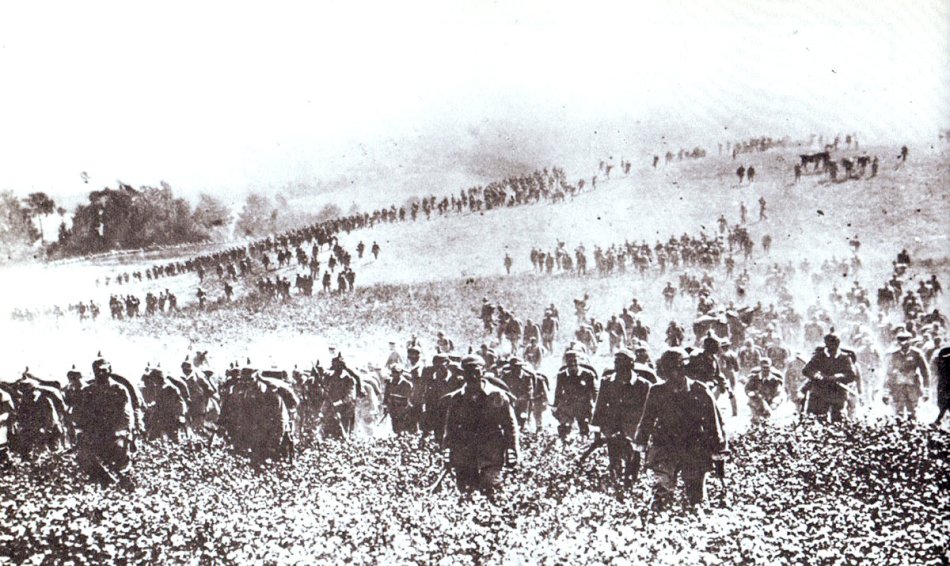 The first, second and third army group of the German advance through Belgium, swept aside all resistance in August 1914. Liege was Belgium’s first casualty being pounded into submission by 420mm and 305mm heavy guns. Having learnt a great deal from their success at Liege, the Germans hauled their heavy artillery to complete their rout of the fortified towns of Lamur and Charleroi. When Brussels fell on the 20th August, the Belgian army had no choice but to withdraw to their last remaining stronghold city of Antwerp. At the same time printing presses from around the world were kept busy, as its correspondence relayed stories about how impressive the speed of the German invasion was through Belgium. An American journalist named Richard Harding Davis described the Germans as ‘one unbroken steel-gray column’ who marched as ‘hour after hour passed and there was no halt, no breathing time, no open spaces in the ranks, the thing became uncanny, inhuman…’ . In only a little over three weeks of fighting on the western front, Belgium was on its knees. It had been completely devastated in what historians refer to as the ‘rape of Belgium’.

Illustrated above is the advance through Belgium by Germany’s three army groups. Belgium’s dogged resistance brought the Allies enough time to reorganise their armies, but at what price to the people of Belgium?

It has been said that with the need for speed in the German’s advance through Belgium to get to Paris, the German high command endorsed whatever action was necessary including the repression of Belgian civilians. With this green light came the first of the terrible acts against Belgian civilians, occurring simultaneously with the siege of Liege. From the outset of the invasion, the Germans were acutely aware that they might meet with popular resistance, as they did some forty years earlier in the 1871 war with France. Back then civilian snipers known as franc-tireurs harassed the victorious Germans, sapping them of morale having to deal with an unseen enemy. This unconventional fighting force in 1871 was regarded by the Germans as cowardly and against all the traditional rules or laws of engagement. Therefore, when the first imagined shots rang out around Liege in early August, the Germans employed extraordinary measures to deal with civilian snipers and other suspected resistance and saboteurs. The purpose of these measures, as historian Paul Ham points out, were to ‘crush the Belgian people, whose acts of resistance were clogging up the German war plan.’

As unexplained shooting on the evening of August 4th were fired, it afforded the lives of almost a dozen German soldiers. In retaliation, the Germans killed ten villagers including some children the following day. Though, the worst was yet to come, as a further one hundred and seventeen civilians were murdered in the wars first mass executions allegedly because a local Belgian teacher had given away German positions near one of the Liege fortifications. Larger numbers of civilian deaths also continued over the next four days and by the 8th, some eight hundred and fifty civilians were killed in and around the city of Liege.

A graphic depiction of the execution of civilians in Blegny, Belgium.

Around this time a German officer was asked by a Liege civilian why did the Germans kill his father, who had done nothing to provoke the retaliation they suffered under the Germans ? The officers response was, ‘It doesn’t matter. At Liege you kill our men. We also have the right to kill you.’ Such was the illogical thought that all common sense and decency went out the door ! With this also came the wholesale destruction of property and buildings. For instance, some 1,300 buildings were damaged and burned in Liege. This would become the new nature of warfare in twentieth century climaxing in the Second World War.

The famous war poster ‘The Huns have desecrated and destroyed the Cathedrals of France and Belgium’ is arguably our most controversial illustration of the sort of destruction that took place in towns and cities across Belgium. Though arguably the most notorious crime of all perpetrated by the Germans and one that is well document happened in Louvain. The Germans sacked, set fire to the city and massacred its inhabitants without remorse or regard. Witnesses, which included journalists from abroad, reported what they had seen. The Daily Mail in Britain probably sums up best the thoughts of most, as it reported the destruction as ‘almost incredible in its wickedness…(as men were) remorselessly shot down by the guards. They drove the women and children into the fields, perpetrating upon them atrocities which cannot be detailed in cold print. They then bombarded the city and destroyed the best part of it in a few hours…’ Amongst the ruins of the city the famed University library’s 230,000 books and medieval manuscripts were also lost forever.

Germans moving in formation through the ruin of Louvain.

The ruin of the Louvain Library

Two women in the city of Louvain make their way through the rumble near the Hotel de Ville.

These scenes of destruction and death by firing squad were also repeated across Belgium in places like Blegny, Soumagne, Romsee, Olne and Dinanti. In Dinanti, German troops from Saxony were quite savage as hundreds of civilians were rounded up like sheep and shot in the town square. In all over six hundred men, women and children were murdered. Stories like these of the ‘rape of Belgium’ are found in numerous books and sources. In Paul Ham’s 1914, he dedicates a whole chapter to these early war crimes in Belgium. Though he does warn us that the truth of these allegation of German atrocities will unfortunately always be a source of heated debate. He also points out that although the Germans at the time ‘attempted to exonerate its army’  in the end it ‘merely aggravated the guilt’. Therefore, there can be little doubt that what occurred is true, particularly because we have so many eyewitness accounts from journalists and distraught refugees that ended up fleeing from their homes.

The most feared army in Europe had without doubt sealed its fate around the world as the ogres and thugs, rapists and even ‘baby killers’ of opening month of war. The events in Belgium would also be used to great effect to further damage the reputation of Germany worldwide in many graphic propaganda posters throughout the next four years of war. Though one thing that became crystal clear as the Germans converged on the border between France and Belgium, was that the Allies agreed that Germany had to be now stopped at all cost. A declaration was even drafted in September, where all the allied nations agreed that none of them would conclude a separate peace with Germany. 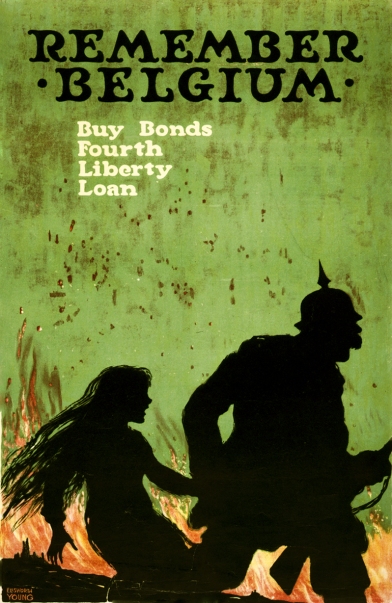 American war bonds poster using the ‘rape of Belgium’ to raise money for the war effort. 1918.

Photo Credit: Every effort has been made to trace and acknowledge appropriate credit. All images are in the public domain except the Germans army moving through the ruin of Louvain © IWM (Q 88091) and the two women in the rumble near the Hotel de Ville © IWM (Q 53271). These two images are courtesy of the IWM who own the copyright and are used under the IWM non Commercial License. The header image of the German advance is courtesy of RA/Lebrecht Music and Arts. I believe my inclusion of this image may constitute as fair use to illustrate the opening German march through Belgium.

7 comments on “A history of the First World War: No. 10 The march through Belgium and German Atrocities !”