The remains of St. Nicholas, who is believed to be the inspiration behind our modern-day Santa Claus, are buried in a number of holy places across Europe, from Bari to Venice and possibly Kilkenny, in Ireland. If it is true at all, how is it possible ? Surely he was buried in one place ? At first he was, originally buried in the cathedral church soon after his death in Myra, 346 AD; and as far as we can tell he remained entombed there for some 800 years; until Christian fanatics or thieves seized parts of his skeletal remains and whisked them across Europe. It is here that the story of his resting relics takes a turn down the path of legend or folklore.

To make sense of the story behind St. Nicholas’ relics being removed from Demre, the Lycian town of Myra, we must first return to the year 1071, sixteen years before the first sailors took his remains. In that dramatic year, Romanos IV Diogenes and his Byzantine army was crushed at the Battle of Manzikert. This event brought about a sense of dread and fear amongst Christians, who believed that pilgrimage to the sacred site of Myra, to pay homage to St. Nicholas, would become extremely dangerous, even cease to exist, because of the continuous incursions made by the Turks.

With Asia Minor becoming increasing unstable over the next decade or so, Italian merchant sailors in 1087 decided to briefly stop, while they still could, in the port city of Andriake in Myra, to venerate the patron saint of sailors. It was inside the ancient church of Derme, that the sailors had illusions of grandeur and smashed open the sarcophagus of St. Nicholas, right under the noses of the monks and the Turks, and stole the relics.

Why they supposedly stole the relics is often a subject that is up for debate. It is believed that they most likely did it for fame, fortune and an increase in numbers of pilgrims visiting their own city. Futhermore, with accessibility to the Holy Lands, all but lost to pilgrims of Western Europe, as Christians they probably believed it was their duty to save the relics of St, Nicholas before it was too late. The sacred relics in the hands of the Italians was arguably safer than in the hands of the Saracen Turks, where quite possibly the saints relics may have been violated or destroyed? 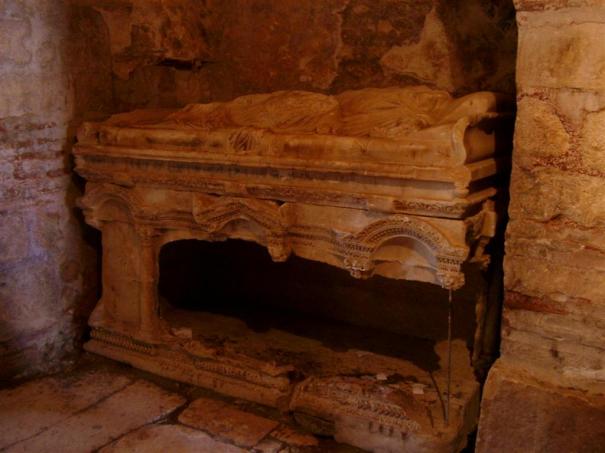 The tomb of St.Nicholas in the ruins of an ancient Byzantine church in Demre, Myra.

Related to this story is an alternative version that has the monks of Myra is sheer panic around about the time of the great Turk incursions. In that story the monks welcomed the Italian sailors in 1087 because they believed the relics of the saint were no longer save in the church in Demre. With the blessing of the monks, the relics of St. Nicholas set sail for Bari. On board accompanying the relics was a monk from the monastery of Myra. Nonetheless, whichever story we are to believe the relics arrived in Bari in early May, 1087. As a consequence, a new Church named the Basilicia di San Nicola was built to house St. Nicholas’ remains and was consecration by Pope Urban II in 1089. It was with the Pope’s delicate hands that the relics of the saint were placed into the crypt of the church.

However, our story of the saint’s relics does not end here. According to legend these merchant sailors from Bari had only collected just half of the skeletal remains of St. Nicholas. The rest of the smaller fragments of the relics from Myra were collected by Venetian sailors during the First Crusade. On returning to Venice, some ten years after the Bari sailors had first stolen St. Nicholas remains, a new church was dedicated called the San Nicolo al Lido on the long Venetian sandbar ‘The Lido’.

The second primary site of St. Nicholas’ relics are entombed within the walls of the San Nicolo al Lido, in Venice.

If all of this is true and we are to believe that St. Nicholas’ relics are located in the two Italian churches, what do we make of another legend that states that St. Nicholas was removed from Bari and buried in an Irish grave in Kilkenny? The alleged burial spot of a well-worn slab that features two crusader knights sitting on the shoulders of a cleric (see below), does seems persuasive? There are some Irish experts that seem truly convinced that St. Nicholas’ remains were exhumed from Bari after the Normans were forced out of Italy by the Genoese. However, in what seems like an agreeable story, and as much as would like it to be real, it just doesn’t ring true. The reason is because forensic testing carried out first on the remains of the skeleton in the crypt in Bari, in 1953 and in Venice in the early 1990’s confirmed that the relics of both churches, the Basilicia di San Nicola and the San Nicolo al Lido, belonged to the same person, who we believe to be St. Nicholas of Myra. From this evidence and for the Irish to have any legitimate claims to St. Nicholas relics, you would then expect that the remains in Bari would be different to the ones in Venice.

Though what is interesting to note is that, when Pope Pius XII gave permission in Bari, 1953, for restoration works to be done on the crypt and for the condition of the saints relics to be checked, it was quite noticeable that many of the saints skeletal remains were missing. The San Nicola al Lido in Venice, of course, had some of these remains, but what happen to the rest ? Did the Crusader knights actually take some of these relics to Ireland ? It’s possible, and even I have to admit you cannot discard the theory. Century old practice of distributing pieces of relics for the consecration of sanctuaries, the dedication of churches and monasteries was apparently done all the time. Many churches today across Europe in places such as Greece, Germany and Russia and as far as across the Atlantic in Orthodox churches in the United States, all today claim to have in their possession small pieces and fragments of the relics of St. Nicholas.

The supposed burial site of St. Nicholas in Kilkenny, Ireland.

In the end we are left to wonder, what would St. Nicholas make of this three-ring circus ? As Catholic and Orthodox pilgrims continue to venerate him year after year, he just might still have enough patience to forgive us. Though I often wonder, would it not be in our vested interest to maybe one day return his remains to his original resting place back in Myra ? Don’t think no one has asked. The Turkish government formally put in a request in 2009 to have his relics returned. Unfortunately, it seems it is highly unlikely that this will ever occur. Bari and Venice, for instance, quite enjoy the bragging rights that they have over their guardianship of St. Nicholas relics.

2 comments on “The relics of St. Nicholas: From Myra to Bari and across Europe.”