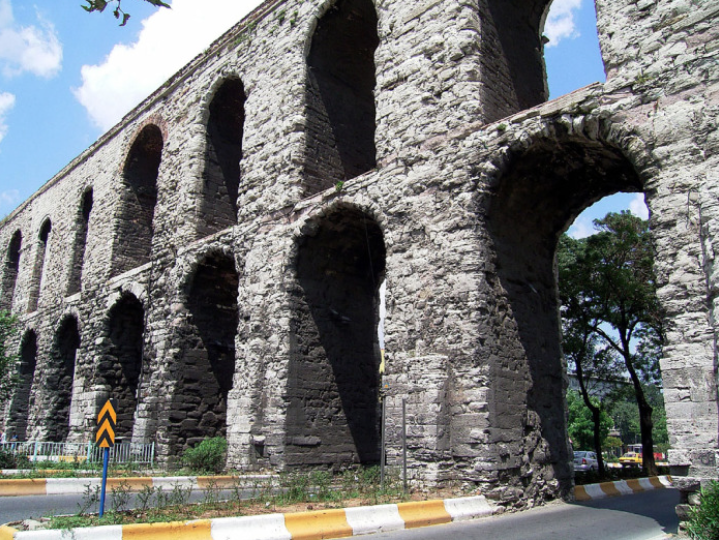 In modern Istanbul, standing impressively over the traffic on the busy Atatürk Bulvarı is the Aqueduct of Valens. (Today it is known better as the Bozdogan Kemeri.) It is a two-story structure standing at a maximum height of about twenty metres and characterized by Roman arches along its whole length. Originally almost one kilometre in length (971 metres), spanning the valley between the third and fourth hills of Constantinople, only nine hundred and twenty metres still remains. It was a part of the single longest ancient aqueduct system ever built that supplied water to Byzantium’s most important city. From the vicinity of Bizye (modern Vize) to Constantinople the long distance water channel was over 250 km long. Over incredible terrain, it travelled across more than 30 stone bridges and through kilometres of underground tunnels, until it reached the Valens aqueduct bridge in the heart of the city.

When Emperor Constantine founded his city Constantinople, along the Bosphorus , he considered carefully its strategic position for the purposes of defence, governance and trade. He set about improving the city with extensive infrastructure and his plans included an overhaul of the water supply system to the city. Two centuries earlier, Emperor Hadrian built an aqueduct to bring water supply to Byzantium (its former name) from the forests bordering the Black Sea. However, by the time of Constantine’s reign, the ability to provide water to an increasing population just wasn’t adequate enough. Imperial administrations beginning with Constantine therefore planned to build further systems of pipelines and aqueducts to bring water to the city “from almost as far as the Bulgarian frontier.” We cannot exactly pinpoint the beginning of the construction of the famous Valens aqueduct, but it is believed it was commenced during Constantius II reign. By the time Emperor Valens came to rule in the east, he inherited the task of completing the last phase of this elaborate network, which greeted the waters of Thrace to the capital city. Many historians observe that Valens merely just restored the earlier aqueducts built by probably both Constantius and Emperor Hadrian. The happenstance of history honours Valens, as the aqueducts champion, because it was eventually completed during his reign, and inaugurated in the year 373 AD.

Standing impressively over the traffic on the busy Atatürk Bulvarı is the Aqueduct of Valens.

The Valens aqueduct brought the city a vital new water supply and lease of life, filling baths, hundreds of cisterns and reservoirs. (Alternative water sources situated outside the city bounds, in particular the area known as the Belgrade forest, contributed to the overall reserves of water supply too.) It helped Constantinople to develop into one the great cities of Late Antiquity and the Middle Ages. It is important to note that despite the engineering achievement of the Valens aqueduct, water supply in Constantinople almost always remained a concern as extensions, repairs and new lines were built up to the sixth century. The fear of earthquake damage and sabotage was always a matter of the utmost importance in the mind of Byzantine administrators. It has been suggested that one of the reasons for the construction of the Theodosius Land Wall was to protect the city’s water supply. This observation might be correct and it is not surprising that invaders might want to take deliberate action for military advantage. Interestingly, the Valens aqueduct was destroyed by the Avars during the siege of 626, outside its huge walls. It wasn’t rebuilt until the middle of the eighth century. The aqueduct received its last known restoration work in the 12th century under the Byzantines. After the conquest of Constantinople in 1453, the Ottomans repaired the aqueduct several more times during its history. These important restoration works (and modifications) prolonged the survival of the Valens aqueduct to the present day.

“as far away as the present Bulgarian frontier…”, J. A. S Evans, The Age of Justinian: The Circumstances of Imperial Power, Routledge, 1996, p. 31.

The chapter entitled ‘The Infrastructure of a Great City: Earth, Walls and Water in Late Antique Constantinople, in Technology in Transition A.D. 300-650, Brill, 2007, edited by Luke Lavan, Enrico Zanini and Alexander Sarantis, is worth reading on the scale and complexity of Constantinople’s water supply.

James Crow, Jonathan Bardill and Richard Bayliss, The Water Supply of Byzantine Constantinople, Society for the Promotion of Roman Studies, 2008.