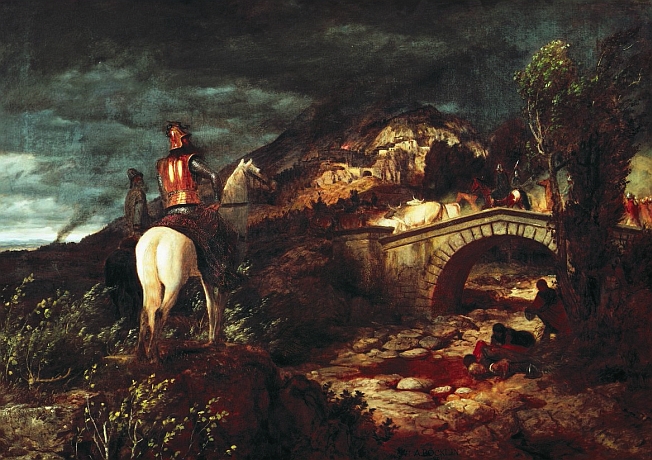 From the mid 370’s a frightening new nomadic force arrive out of Asia and into eastern Europe. These warrior people were the Huns, who descended upon the Gothic tribes of northeastern Europe, causing utter destruction and complete chaos. The intimidating sight and sudden irruptions of Hun mounted archers, with their infamous composite recurved bow, caught everyone by surprise, including the Romans. Like the Goths, the Romans had no idea who these nomadic people were except to say that they were a menace. In the words of Roman historian Ammianus Marcellinus, they were:

“a race of men hitherto unknown had now arisen from a hidden nook of the earth, like a tempest of snows from the high mountains, and was seizing or destroying everything in its way..”

Despite this apt image, the Romans were apparently at first somewhat pleased when they had learnt that the eastern Goths (Ostrogoths, also known as the Greuthungi) had been defeated by the Huns. However, the Romans, soon after changed their minds, when the defeated Ostrogoths suddenly created a refugee problem never before witness by any Roman. As a result, the western branch of the Goths (Visigoths, also known as the Tervingi), who were not interested in meeting the same fate as their eastern cousins, decided that rather than surrender to the Huns, they would abandon what was left of their homes and seek refuge in the Roman empire.

It was in the summer of 376, that Ammianus goes on to describes how, the Visigoths reeling from shock, despair and imminent hunger, found themselves camped on the banks of the Danube, made up of tens of thousands of families, children, sick and the old. Clinging to the northern bank with their lives supposedly hanging by a thread, it was the new Gothic leader Fritigern, who first asked the Romans for permission to enter the empire. At Fritigern’s request the Romans made their first initial visits to the Goths camps, where they heard further first hand reports of the Huns destruction. They were also shocked by the conditions of the camps and the sheer numbers of those actually seeking asylum. The Roman officials subsequently made their own reports and sent them to Emperor Valens on campaign in Antioch, with an urgent request on how best to handle this humanitarian crisis. But it would be some time before the Roman officials heard back from Valens.

When Emperor Valens eventually did receive the reports of the Goths massing along the banks of the Danube, he decided it was a good idea to turn the crisis to some advantage. Having already committed most of his legions to a war against Shapur II in Persia and knowing that there was nothing he could really do in preventing the Visigoths from entering the empire by force, he agreed to provide the Visigoths safe haven. He ordered his officials to provide them with transport, food and the opportunity to settle on vacant lands in the Balkans. (He also ordered his official to make sure they regulated the flow of refugees from only the Visigoths camps and no other.) But they could only enter the empire by agreeing to live peacefully and surrendering their arms. Valens had also saw this as an opportunity to force the Visigoths (as part of their resettlement) to supply more Gothic men for the imperial army. In theory, the admission of the Visigoths was a great opportunity to strengthen the empire, but little did Valens know that his officials would botch the job!

The resettlement of the Visigoths began in the worst possible way, with the chaotic river crossings that saw many vessels sink, and even more people drown in a desperate attempt, trying to swim across a swollen river drenched by heavy rains. Day and night for many days, possibly weeks, the Goths crossed the dangerous river into the arms of waiting Roman officials. If the Goths had thought there troubles were over on the south bank, they were sorely mistaken as they were forced into huge holding camps. The conditions in these holding camps were day by day becoming increasingly overcrowded and unhygienic. The imminent danger of starvation also hung over the camp as rations couldn’t keep up with demand.

It wasn’t long before the Goths began to ask questions, as to why they were not being moved to the settlements that were promised to them. The answer was simple. The Roman officials who were in charge of carrying out Valens orders were in no hurry to compile because they believed there was a great opportunity to profit from the misery of the Goths. According to Ammianus, these officials led by the regional commander named Lupicinus, were corrupt and reckless men, who hatched schemes to sell the food intended for the Goths on the black market. The little rations that were handed out to the Goths were not sufficient enough, which led to many Goths who were desperate enough, to sell their children (into slavery) for food. The vile Romans went as far as to round-up dogs to sell to the Goths as food. In the end, the horrible schemes in place became unmanageable, as resentment and hostility festered. To add to the difficulty of the situation, more refugees from across the Danube now began to cross without permission because the river crossings were unexpectedly weakly held. These refugees were the Visigoths eastern cousins, hordes of Ostrogoths, also now fleeing the Huns in great numbers. The thrust and influx of these new arrivals eventually forced the flawed Roman commander Lipicinus to move the first convoy of Goths across the province of Thrace.

The first urban centre that was supposed to greet the Goths was Marcianople. However, the locals fearing the worst refused to let them in, even when the Goths begged for permission at least to enter the city gates to buy some food. When the desperate Goths tried to force the gate open, the Roman soldiers who had escorted them intervened and the first signs of a rebellion had started. Interestingly, inside the city the sinister Lipicinus, held a banquet for the Visigoth leaders and when he had heard of the riot outside the walls, he ordered many of Fritigern’s associates to be killed in revenge. When an attempt to seize the rest of Fritigern’s leadership failed, Lipicinus was forced to release Fritigern fearing an outbreak of war. As Fritigern fled, he declared that the Romans had broken their agreements to peacefully settle the Goths. They had enough of Lipicinus and his worthless promises. No longer would they starve or be forced to sell their children into slavery. From now on, the Goths would be the masters of their own fate. Procuring weapons and horses the Goths descended on the province of Thrace filled with animosity towards the Romans.

Photo credit: The header image is entitled ‘March of the Goths’ by Swiss painter Arnold Böcklin (1827-1901).

J.B. Bury, The Invasion of Europe by the Barbarians, MacMillan, London, 1928.

Alessandro Barbero, The Day of The Barbarians, Translated by John Cullen, Walker and Company, 2007.

Edward Gibbon, The Decline and Fall of the Roman Empire, Edited, Abridged and with a Critical Foreword by Hans-Friedrich Mueller, The Modern Library, 2013.

Adrian Goldsworthy, The Fall of the West: The Death of the Roman Superpower, Wiedenfeld & Nicolson, 2009

1 comment on “A short history of Byzantium: No. 26 The Road to Adrianople”