My friend and fellow history blogger Robert Horvat has started a new series of features on his blog where he invites guest bloggers to talk about their five favorite–or at least notable–streets somewhere around the world. Robert asked me to participate, and I’m only too happy to do that, although I confess that the choice of streets is very difficult! At least some of them are. While a lot of urban locales in a lot of places have a wonderful mix of culture, history, excitement and interest, I’ve chosen my five streets based not only on these criteria, but also streets that mean something to me personally for whatever reason. Therefore, at least a few of these locations you may not have heard of, but they all live in my memory and each of them is a place I hope to return someday. 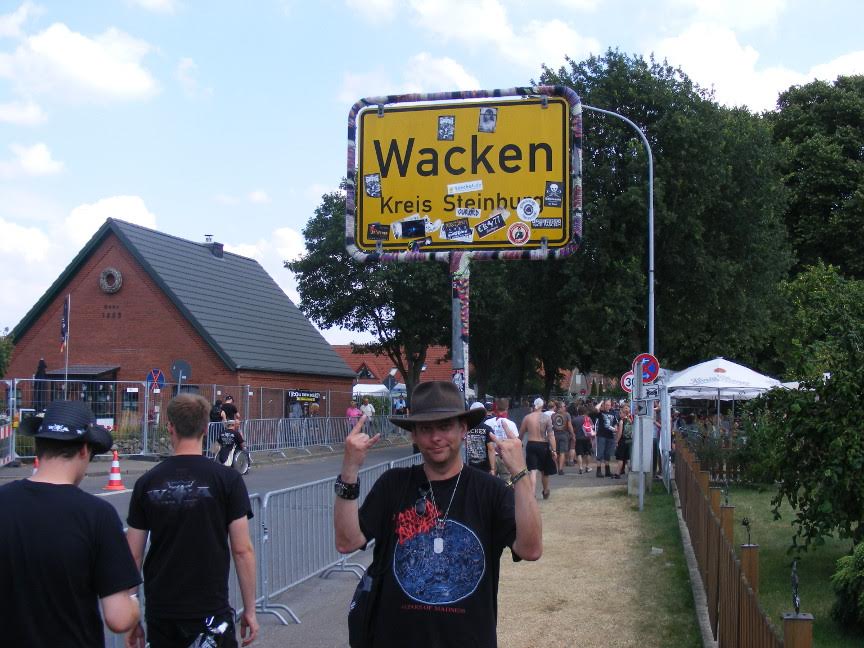 If you’ve read my blog for a while, you probably know that the Wacken Open Air metal festival has been a big part of my life for many years. Every August or late July, 70,000 metalheads descend upon the small village of Wacken, in Schleswig-Holstein, Germany for the biggest metal festival in the world, which has been held on the farm fields just beyond the town since 1990. Hauptstrasse is the “main drag” of Wacken, which has only about 1,500 residents the rest of the year. If you go to the festival you’ll become quite familiar with the landmarks on this street: the Edeka Market, the cathedral, the quaint little farmhouses, and of course the Wacken festival office. In the twelve times I attended the festival between 2000 and 2014, I walked up and down Hauptstrasse countless times. It’s a street I know very well and will always attain an affinity for.

My second selection is closely related to the first one. Mönkebergstrasse is one of the main shopping streets in the center of Hamburg, Germany, an avenue between the Hauptbanhof (central train station) and the Rathaus (the old neo-Gothic town hall). In many ways it’s the “main drag” of central Hamburg, though it’s plied mostly by pedestrians. I got to know Hamburg quite well because of my many trips to the Wacken Open Air festival. Coming from the United States, you can only fly into Hamburg, and on my trips I’d usually stay one night in Hamburg before the festival at a hotel and another after it. What do you do in Hamburg, especially on a Sunday afternoon right after returning from four exhausting days of camping in the Wacken mud? You go for a stroll on the Mönkebergstrasse.

There are many sights to see on this street, which features a lot of old buildings that, particularly since the turn of this century, have been taken over by fashionable shops. The “Passageway” (Einkaufspassage) is a pedestrian passage built into an old kontor building, which now features an atrium decorated with bizarre concrete statues…including a monkey with its genitalia hanging out. (!) There are a lot of charming little shops and sidewalk cafes to be found along the Mönkebergstrasse; there was once even a Burger King in a building that looked like an old Grecian temple! (It’s now a Starbucks). I have many fond memories of Mönkebergstrasse, and I will likely walk its ancient bricks again…my “last” Wacken is probably not really my last.

Rome is, in many ways, my favorite city. It’s the Eternal City, one of the seats of Western civilization, and the site of more history, culture, food and wine than you can shake a stick at. I visited Rome twice, in 2000 and in 2006, both in the summer, and I was utterly enchanted by the vibe of the city. Nowhere else can you see ancient temples side-by-side with Baroque-era buildings and modern department stores, in view of sidewalk cafes serving pizza and wine, with beautiful women (and attractive guys) roaring by on motorbikes inches from your nose. Rome is a world unto itself. I tried to capture its ambience in a section of my 2008 novel All Giamotti’s Children, part of which takes place in modern Rome.

Of all the places I could choose for Rome, I choose a street called the Via Aurelia. It’s a normal, workaday street like any in modern Rome, stacked with apartment buildings and cluttered with chaotic traffic jams. I chose this street because when I last visited Rome in 2006 I stayed at the flat of my friend, Francesco, which was located on this street. I remember going out onto his narrow balcony and looking out onto all of Rome rising around me; I was right in the middle of another world. As it turns out, the Via Aurelia has an ancient tradition. It’s one of the roads built by the ancient Roman Republic in the 240s BCE and stretched from Rome north to Pisae (Pisa). I do not know if the modern 21st century Via Aurelia tracks the exact location of the portion of the ancient road as it existed then–I suspect it doesn’t–but the name endures, and connects the modern city to its classical roots and its awesome history.

I first set foot on Lambeth Road in the summer of 2000, during my first trip to London. Being a huge history buff, I desperately wanted to see the Imperial War Museum, whose stately dome and mighty naval guns (transplanted from a battleship) loom over this otherwise unassuming street in southeast London. The Imperial War Museum, one of the most awesome museums in the world, is mind-blowing enough, featuring not merely large artifacts like a Sherman tank or the self-same plane in which Rudolf Hess was shot down over England in 1941, but small artifacts like matchbooks carried by World War I soldiers or the pen FDR used to sign the declaration of war on Japan. On subsequent trips I discovered there was more to Lambeth Road than just the museum. There’s a great little pub called The Three Stags across the street and down the block from the IMW, and between them, incidentally, is the historic house where William Bligh–the captain of the HMS Bounty whose crew mutinied against him in 1789–lived for many years and, I believe, died. Lambeth Road is the perfect embodiment of London’s great urban history, and it’s a fun street to boot.

The “804 trail” is not a road for car passage, but rather a footpath. It snakes along the cliffs overlooking the sea in the small town of Yachats, on the central Oregon Coast, and it’s one of my favorite places on our little planet Earth. The 804 runs for 3/4 of a mile and connects the grass-covered promontory on which the Adobe Resort, a historic hotel originally built in the early 1960s, to a flat sandy beach (which is rare in Oregon) called Tillicum Beach. My family has been vacationing at Yachats for over 25 years and during that quarter century I’ve hiked the 804 countless times. Despite its short length, it offers stunning vistas not just of the ocean–sometimes crashing violently against the rocks–but also an eerie forest of small evergreens stunted and distorted by the ferocious coastal winds. The best time to be on the 804 Trail is in the winter, specifically December. Yes, we Oregonians, opposite any other creatures in the Northern Hemisphere, flock to our beaches in December, where moody clouds, gray waves and storms make for a moving and deeply beautiful experience.

Although it’s a footpath today, the 804 Trail is historic. For centuries a path on the same spot was used by Native Americans who traveled between Newport Bay and the mouth of the Yachats River to catch fish. In the 19th century it carried horse and buggy traffic between Yachats and Waldport which is about 8 miles north. In the automobile era it was eventually replaced by US-101, the Pacific Coast Highway, but the Oregon parks service as well as interested citizens worked to restore this section of it for the enjoyment of visitors to the coast today. It’s truly a wonderful trail, snaking its way through time and history in one of the most visually stunning places (in my opinion) in North America.

I hope you enjoyed this brief tour of my favorite streets around the world. Thanks to Robert for hosting this series and inviting me to take part!

Sean Munger is a historian, teacher and author. His academic work focuses on the history of climate change. With regards to fiction, he is probably most well-known for his “historical horror” novels Zombie Rebellion, Zombies of Byzantium, Doppelganger and The Rats of Midnight. He has also written various short stories. His latest collection is Hotel Himalaya: Three Travel Romances.

Photo Credits: Images of Haupstrasse at Wacken and the “804” Trail in Oregon are used here by me with permission of Sean, and may not be copied or re-used for any purpose without permission. The street view images of Lambeth Road and the Via Aurelia are courtesy of Google Earth. The street view image of Mönckebergstrasse is by flickr user Jenarq and is used under the Creative Commons Attribution-NonCommercial 2.0 license.

2 comments on “Sean Munger’s ‘The Best Streets in the World’.”