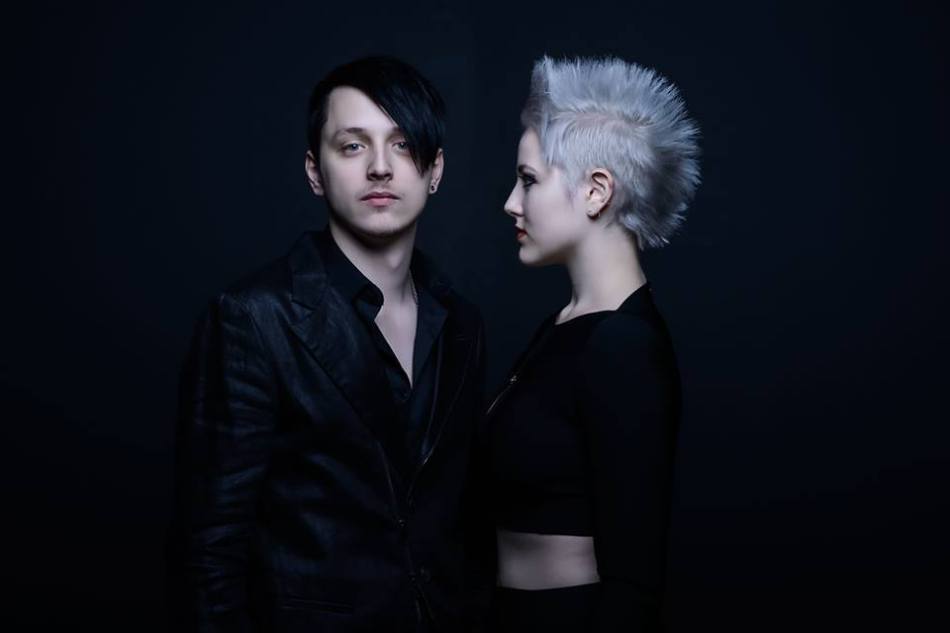 Black Satellite are duo Larissa Vale and Kyle Hawken whom I recently compared to aspects of Garbage’s crossover heavy sound to a friend of mine. So if you’re into alternative rock or even metal, Black Satellite’s amazing debut album Endless is definitely for you. It is aggressive and innovative. In a word, I’m stunned. It’s like they brought their showsmanship from their live shows to the studio, refined it and truly captured the moment on this album.

With a little digging, I soon discovered these New York native’s alternative rock roots run deep and also extend across influences from Alice in Chains to Yo-Yo Ma. Maybe it shouldn’t come as a surprise to hear vocalist Larissa Vale’s voice soar skyward with conviction and Kyle Hawken’s brilliant guitar riffs saturate every track on Endless. If I sound like a giddy teenager its because I really believe Larissa’s and Kyle’s unique sound and songwriting have hit all the right notes here.

In short, the album grabs your attention quite early, in fact its opening track Affliction builds and boils over to what we can expect from the rest of the album. Blind and Valkyrie are also strong standouts, but my favourite tracks are My Resolve and Calamity. But I think the album’s most surprising song probably has to be Still I Remember, an example of the absolute trust and rapport Vale and Hawken’s have with each other as collaborators, an accumulation of six years of some of their most honest and difficult experiences. That said, I recently reached out to Larissa Vale of Black Satellite to talk about her working relationship with Kyle, some of the themes of the album and her vocal inspirations amongst other things. Here is some of what we talked about.

How does it make you feel that you know you have fans as far as Australia?

It’s absolutely incredible that we have fans in Australia and all over the world! It means we are definitely accomplishing what we set out to do —to reach as many people as possible with our music. We hope listeners can find a certain level of relatability in our songs.

I have read that the whole experience that eventually led to the release of Endless had come about from a tough time that both you and Kyle had professionally and personally. Did you ever believe you weren’t going to get there? Did you ever consider giving up your life’s passion?

There were defiantly times where our resolve was challenged. The only way you can make it anywhere is with an undeniable will and drive, the ability to pick yourself up and continue to move forward. Giving up simply wasn’t an option.

The lyrics throughout Endless seem quite heavy at times. Feelings of hurt and struggle are strong themes of the album. I understand that you find inspiration in both beauty and despair. How will you stand back and look at this album in time? Will you revisit similar themes in the future or will you deliberately choose to write about something completely opposite?

We typically write about what we are feeling at the time, it’s definitely an outlet and coping mechanism. We will likely view this album as a memorable chapter in our lives. It was very much a period of reflection and understanding who we had become as people. It’s hard to say what we’ll write about in the future as our songs are based off of personal experiences. Although, we do have an idea about what concepts we’d like to further explore.

Who plays what role in Black Satellite? What I mean by that is, as a team do you have a preferred way of constructing a song?

Our preferred way of writing is essentially like painting watercolor. We bounce our ideas back and forth and keep layering until we have a completed song. We inspire each other to come up with certain parts. It would be a bloody massacre to try to tear apart the songs and figure out who wrote what. It’s all 50/50.

I’m always looking out for new music to inspire me. It’s fair to say stumbling across Black Satellite led me here inquisitively to interview you. What new music have you come across that makes you go wow?

We recently started listening to Gojira. Their latest record is pure gold.

Larissa, did you say once, “All of my inspirations, vocally, are from male singers”? Tell me about some of those artists that have given you such poise and strength as a vocalist?

My main vocal inspirations are Marilyn Manson, Chris Cornell, and Maynard Keenan. Everyone compares me to Garbage, but the funny thing is I never really listened to them much. I just knew as a young girl, I never wanted to sound like the popular female singers at the time. I did everything I could to not sound weak or passive, I wanted to be as aggressive and intimidating as all my favorite vocalists. I got teased a lot in school, I wanted to make sure no one would fuck with me.

How has your music evolved since you and Kyle first started playing together?

As a team, our creative ability and chemistry is undeniable. For the first time I didn’t have to labor to communicate where I was going with a song artistically and vice versa. It makes for a much smoother writing process with much less time wasted on frustration and miscommunication, which can quickly sap the inspiration out of any writing session. We are so efficient that the entire record was demoed in just 8 days, including writing 6 brand new songs!

Can you tell us Larissa about a typical day in your life? Briefly.

After I grab a cup of coffee, I immediately jump on my laptop, and start working on interviews, emails, answering fan mail, researching live performance opportunities etc. Pretty much anything band-related. Since I’m a workaholic, this generally lasts until the afternoon when I start to feel guilty for not going outside. Although, this won’t last long as I’ll typically pick it up again and work until 2:00am. Of course, I spend some time catching up on my favorite TV shows and writing music!

What are some of the earliest and/or most influential bands you and Kyle have seen in concert?

My brother convinced our parents to take us to a Tool concert when I was 13. Shortly after I met Kyle we went to see Soundgarden together, which was the first time he really got to see one of his inspirations live.

I’ve heard your live shows are uncompromising and forceful. Now that sure sounds like a great compliment. What inspires you to put on a really good show for fans? I’d bet you expel a lot of energy doing so?

As a fan of music, I know how influential and memorable a great show can be. I want fans to go home knowing they just witnessed us giving them everything we’ve got. We, in turn, feed off the energy of the crowd as well. We’ve had people screaming, singing along, clapping, and throwing their hands in the air! It’s a collaboration with everyone in the room that really creates something special.

Photo credits: All press photos are courtesy of photographer Chris Owyoung and Black Satellite. I am not the uploader of the You Tube clip embedded here.

0 comments on ““I wanted to be as aggressive and intimidating as all my favorite vocalists”: Larissa Vale on Black Satellite and their debut album.”