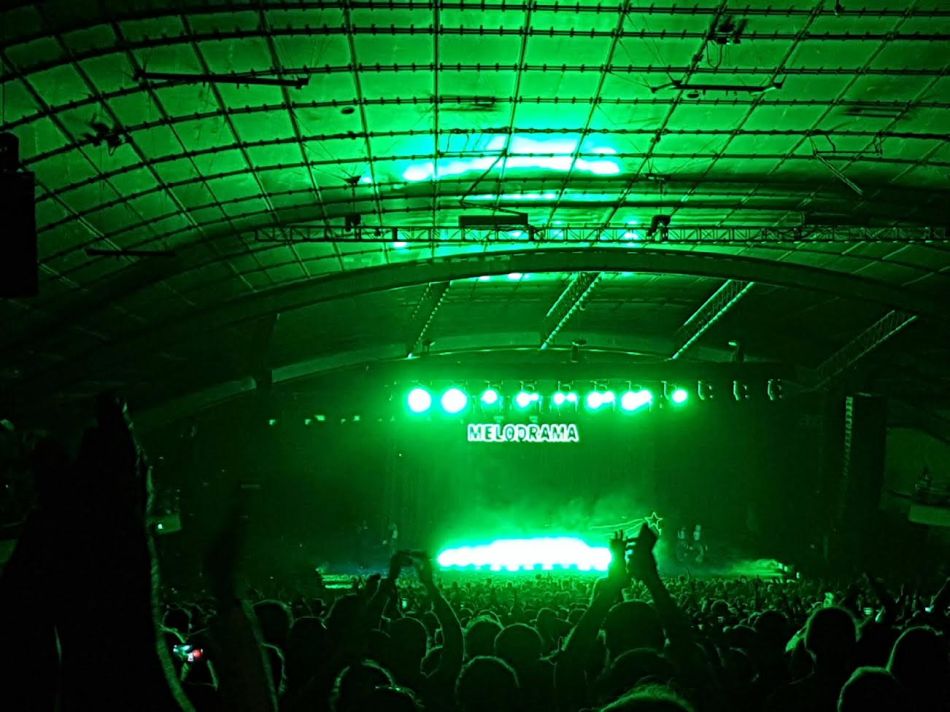 A turbulent weekend of storms and lightning threatened to drench and dampen Lorde’s final show of the Australian leg of her Melodrama world tour at Melbourne’s Sidney Myer Musical Bowl last night. Thankfully it never happened. It’s almost like Lorde herself snatched the pounding hammer from the mythical Thor’s grasp. Lorde it seems had plans to create her own musical storm of light, colour and sound!

As soon as the opening words “A couple rebel top gun pilots, Flyin’ with nowhere to be, oh…” (from Homemade Dynamite) gush from Lorde’s lips, it’s clear from the deafening scream from the Melbourne faithful that something special is about to happen. It has been three and a half years since Lorde was here last and it is as if she hasn’t skipped a beat. At one point midway through the show Lorde pauses “Fill me in Melbourne what’s going on? Have you been dating? The banter continues and you can truly feel the communal love for, in Lorde’s words, our New Zealand cousin.

The precocious Ella Marija Lani Telich-O’Connor, aka Lorde, first truly came to our attention five years ago with the mega hit Royals taken from her debut album Pure Heroine and has ever since become one of the world’s most influential pop artists. It is with the release of her second album, Melodrama, in June this year, that she has further established herself as a creative left of centre artist and live performer.

As a young woman (now 21), Lorde who guards her privacy, has allowed us into her world that has at times been challenging and lonely. I wonder if Lorde’s Melodrama world tour is her “act of contrition” before her adoring audience? Her emotional accessibility is of course littered through her new album inspired by her first breakup. In short, Melodrama is also Lorde’s take on her transition from adolescence to adulthood. In an enlightening moment during her show last night before performing Ribs (from Pure Heroine) she talks about how she wrote that song when she was sixteen and how afraid she was of growing up. Almost immediately, in an attempt to reassure herself and her audience she says, “Five years later, I think it’s gonna be ok.” Interestingly, expressing or projecting feelings about being completely alone are not lost on her mostly adoring teen audience. Group therapy never felt better, as Lorde implores us to chant “E-a-na-na-na” from Liability’s delicate chorus. On stage in another show highlight during Team she wilts lying on the stage’s edge, extending out her hand to embrace with several lucky fans in a very intimate moment.

But for the most part last night’s Melodrama show was a celebration. Lorde herself reminds us quite early that “This is a show you’re gonna dance to!” as she bursts into Tennis Court, Harding Feelings and the emotional charged The Lourve. It isn’t until the third act that Lorde charges the atmosphere with spine tingling hook-laden reditions of Royals, Supercut, and Perfect Places. But it is the next to last Greenlight that eventually lifts the roof of The Bowl, as Lorde punches the air with a fiery contempt exercising her demons.

The strobing light show and Lorde’s affinity to colour (it is well-known Lorde’s experience of having synaesthesia has shaped her musical vision) is one of many things that really impressed me about her show. Dominating the stage was also a luminescent astronaut, an arched garden and a trail blazing comet that signalled the transition between Lorde’s three acts. On the hill of the Sidney Myer Music Bowl, giant screens also definitely helped, to see the emotion and excitement upon Lorde’s face as she charmed and sang to her captivated audience. If I had to point out one negative thing about the show, I’m not sure what value Lorde’s dancers (who appeared intermittently) made to the shows aesthetic look. For me, personally, Lorde’s powerful stage presence was enough!

And it is just Lorde’s amazing presence we get, as she brings to an end her show, looping samples to kick off her encore with Loveless. That said, I have been to a number of big shows in recent years and I cannot recall seeing such a confident young woman and talented performer as Lorde, who is genuinely humble and appreciative what fame has brought her. I salute you Lorde!