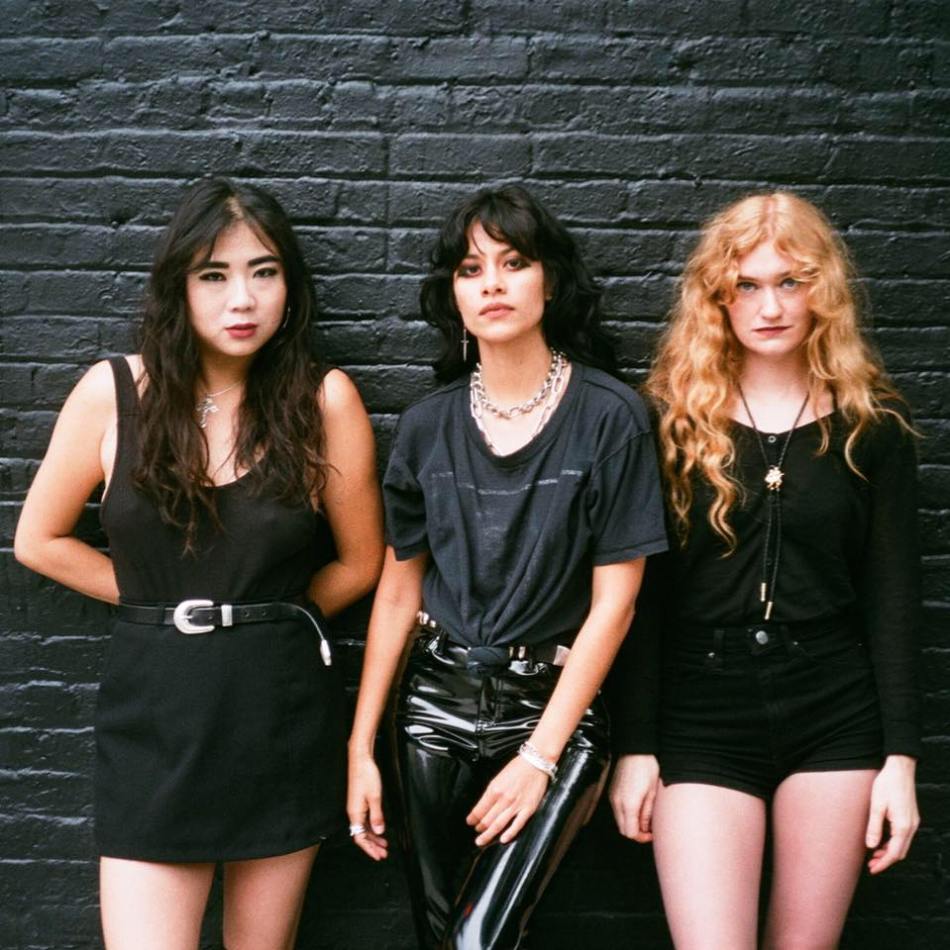 An almost 8,000 miles flight from Los Angeles to Melbourne (last week) and a case of jet lag couldn’t dampen the reverb-soaked punked out rock dished out by LA Witch over the weekend. In the process, there was plenty of love given to the new songs from their self-titled debut album, which showcased their characteristically guitar-drenched heavy sound and lyrics that dig deep into the psyche of Southern Californian life.

What is impressive about seeing LA Witch live is their resolve and commitment. It seems no matter where they play around the world, they never fail to capture and engage with their audience even in the smallest of venues. What I suppose they have discovered touring over a better part of three years, is that creating the right atmosphere at their shows, and with a bit of push and pull, will always have a lasting effect or influence on their audience. That said, the wide-eyed audiences in Melbourne, Wollongong and Sydney recently were absolutely mersermised by this Los Angeles-based trio.

I too, recently became a slave to LA Witch and their seductive self-titled debut album. Tracks like Untitled and Get Lost seriously ooze with ‘reverb-drenched guitar jangles’ that when played loud enough truly exasperate the tinnitus in my ears. In truth, I wouldn’t have it any other way. Importantly, LA Witch’s harsh and jarring sound is without a doubt wholly complimented by frontwoman, Sade Sanchez’s haunting vocals, especially on Drive Your Car. In my minds eye, I can honestly see this song ending up on a Quentin Tarantino soundtrack!

With LA Witch due back to kick off their final three shows in Bondi, Brisbane and Byron Bay from Wednesday (this week), Irita Pai, Sade Sanchez and Ellie English, all found time to speak to me. Here are some of the things we talked about.

I understand you toured for a better part of three years, before finally releasing your self-titled debut. What were the circumstances for putting it off for so long?

IRITA: To be honest, we have recorded pieces of the album over the last few years, but were never exactly happy with the recordings. We would record these pieces in between tours, and when we’d revisit the songs, they just wouldn’t sound quite right. We really wanted to capture the essence of our live shows in the album.

Now that it’s out, which song on the album stands as your favourite? And why?

SADE: I used to be really unhappy with the song ‘Feel Alright’ until I heard it recorded. Sometimes the song itself is not enough and the process of recording and mixing it gets your song where you envisioned it. I guess that’s what’s fun and kinda magical about recording.

IRITA: Untitled is my favorite song to play live, I think it turned out great.

I suppose another tour was always inevitable with the release of the album. Personally, I’m thrilled you played at The Penny Black in Melbourne. But the question I’d like to ask related to touring is, what kind of mischief do you get up to, to stop the boredom of living out of a suitcase?

SADE: We try all sorts of things to keep it fun/interesting. I mean, being in a new place and meeting new people is pretty exciting in itself, but there have been tours that feel a bit torturous. We try and plan ahead of time to make sure we get to explore and sight see on the road. We’re definitely tourists. I never leave on tour without music, movies or reading material for the road. There’s always something new.

IRITA: Every day is a new adventure, with its new set of problems and challenges. We are constantly on the move, so we end up doing so much every day that weeks feel like months, looking back.  This last tour, we ended up booking a hotel in Iowa that happened to have a jacuzzi AND a water slide. That was tight.

Can you tell me about one of your earliest shows you did that still gives you goosebumps? And why?

SADE: Every show still gives me goosebumps. People are usually surprised to hear that I get nervous- still. I guess that  just means I really care.

IRITA: That time we played Austin Psych Fest. It was the biggest crowd we had ever played to up to that point – and it was also the show that I played the most sober. So I was totally nervous for the first song. They sent us the live recordings from that show and you can kind of tell. But the recordings and the show were both amazing.

Irita, you bass work is incredible and often bass players aren’t given enough credit for the hard work they do, especially when creating that atmospheric sound that I love, that is quite evident on your album. With so much of L.A. Witch sound bass-driven, is there any one bass player that you truly admire that inspired you to play the way that you do? And why?

IRITA: Not really, but I do admire Geezer Butler, Tina Weymouth, Stu Cook. I play with my fingers, no pick, and I have flat wound strings.

What are some of the artists that you like that are outside your comfort zone? Those that don’t necessarily influence you or your music, but you happily take pleasure in listening to?

ELLIE: I feel like everything I listen to has a big influence on my playing.

SADE: when it comes to artists I like, there’s definitely none that are outta my comfort zone otherwise I probably wouldn’t listen to it. Haha. But I listen to pretty much everything and it probably all has an influence on me weather it be consciously or subconsciously.

There is an overwhelming feeling that your approach to creating your own sound and aesthetics (I believe you refer to your sound as dark and fuzzy?) is driven by a desire or need to be different? Is that a fair assessment?

SADE: It’s hard to describe your own sound and aesthetic, especially if you’re not necessarily goin for anything in particular. I think we all just know what we like and what we don’t like. Of course it’s great if anyone thinks we’re different or whatever, but the focus for me is just to do what I wanna do creatively.

IRITA: Not really, everything that came out was natural. We never planned to sound a certain way, and certainly didn’t intentionally set out to sound “different”.

Ellie, I’m always curious about how a drummer sets up their kit. How long did it take you to work out what works best for you? What is your greatest strength as the heart of the band?

ELLIE: I have a pretty traditional set up except I sit really low and I have my ride cymbal pretty high. Sitting low can be hard when playing fast, but these songs are more mid tempo so sitting lower just feels better balance wise for me. I have to play the ride higher then normal because I have a tendency to smack my hand on the floor tom a lot when I crash on the ride.

There is a great tradition in creating commanding and eye-popping rock posters that is arguably as old as rock n roll itself. Pearl jam, my favourite rock band, has produced some amazing gig posters over twenty years. That said, I love that you see the value in continuing that tradition. Your US fall tour poster is very clever. How much say do you get in its creation? What can you tell me about its visual symbolism?

IRITA: The artwork for the tour poster was by Caitlin Mattison, a San Francisco based artist. We had been following each other on Instagram for a while, and we loved the poster she did for this years’ Babes Ride Out so we reached out to her. I sent over some inspiration ideas, and she sketched and painted everything out by hand. We actually got to meet for the first time at our San Francisco show, she’s the best.

Sade, I’m mesmerized by your haunting vocals. Can you tell me about how you use your voice to create that reverb sound?

SADE: I’d say it’s vice versa: the reverb is what helps me use my voice. I’m not a singer. I write songs so I have to sing them. I’m ok with not being the best singer. I see my voice the same way I see my guitar. I wouldn’t really wanna play my guitar dry. I wanna plug it in and play with effects, textures and tones. That’s the same thing I wanna do with my voice. It’s also a way to hide how shitty my voice actually is. Hahaha!

How do you go about deciding your setlist on any given gig night? Does your audience influence your decision?

ELLIE: Some times the set changes when we are on stage due to the mood of the show. For example, sometimes we will skip slower songs to keep with the high energy.

IRITA: We usually put together a set list that we feel flows well, and then we’ll add or omit songs depending on how long we have to play. The audience definitely plays a huge role, because if the vibe is good we’ll throw in more songs; or if they want an encore, we bust out some songs for that. It’s very interactive, even though the audience may not know!

Finally, what can we expect from L.A. Witch while your here? This is your first trip to Australia, right?

ELLIE: Yes! First time in Australia. We will most likely play the full album and some additional songs. Some old and some new!

IRITA: A non jet-lagged performance and lots of photos with koalas.

Photo credit: The header image is courtesy of LA Witch and photographed by Marco Hernandez. The US fall tour poster is presumably copyright by Caitlin Mattisson.  I make use of it here under the rational of fair use. It enables me to makes an important contribution to the reader’s understanding of the interview, which could not practically be communicated by words alone. I am not the uploader of You Tube clips embedded here.