The Regrettes are a LA-based punk rock band that the world should be paying close attention to. As self-assertive Gen-Zers they are not frightened or bound by the expectations placed on them, especially how they should think and behaviour. In fact, frontwoman Lydia Night, guitarist Genessa Gariano, bassist Sage Nicole and drummer Maxx Morando, are four of the most interesting young musicians I’ve stumbled across lately. They are open and honest about the music they play, who they play for and their motivations, in particular, advocating female empowerment.

Led by the headstrong singer/songwriter Lydia Night, the Regrettes rise has been sudden, full of rebellious energy and angst, no more evident than in their first singles A Living Human Girl, Hey Now, and Hot. In a few short years since their formation in 2015, they have toured persistently and been rewarded with a Warner Bros. contract. In early 2017, they released their full- length debut Feel Your Feelings Fool! and in the process won over critics and new fans alike.

It was sometime late last year that I discovered The Regrettes, although not in the way I had hoped. It came off the back of hearing about a horrible incident, where Lydia Night was attacked on stage while performing, by an allegedly drug-affected festival fan. Despite being shook-up, Night responded the day after the incident with candor and poise. This was a young woman I immediately had the utmost respect for and to find myself some five months later asking her questions about her band now almost feels surreal.

It’s been a little over a year now since the release of your debut album Feel Your Feelings Fool! What has the reaction been like with fans about its sound, especially on the lyric front?

We have been so overwhelmed with how many people have connected with this album. We knew that people would be able to relate to it, but when someone comes up to you after a show and says the lyrics that you wrote have changed their life, it’s the most insane feeling. We are so grateful to connect with people on that level.

Hot was one of my favourite tracks from your debut. It’s fast and furious. What else can you tell me about it?

This is one of our favorites to play live because it’s almost therapeutic haha. The song is pretty much making sure someone who thinks they are better than others knows that they aren’t.

Our attention shifted away from your debut more recently with the release of your new EP Attention Seeker. Come Through is arguably the standout track. Why a new release so quickly?

We were just itching to release something new. I know it seems super fast after releasing an album only a little over a year ago, but all of the songs on that album were written between 2-5 years ago.

The Regrettes will be touring for the better part of this year. How do you not drive each other crazy? What do you do in your down time to escape the grind of touring?

We have gotten really good at knowing when to give someone space and we just make sure to respect each others boundaries at all times. When we are home I think we all just spend as much time with our friends and family in LA and treat ourselves to relaxing days. I really try to stay in shape with running and aerobics so that when we go back on the road I don’t get tired too easily. I also take lots of baths,

Is it ok if we touch on that crazy incident with the costumed woman at The Growlers’ Six Festival? Personally I was sickened and frightened by what happened. We all have the right to feel safe. Your resilience to bounce back is incredible. Do you feel your shows are a safer place now? Is there anything more you want to say about it?

That shit was terrible. Being on stage is so vulnerable and that experience was super eye-opening. It really isn’t something you can prepare for, but I do feel like if that ever were to happen again, I am much more prepared on how to handle the situation.

Outspoken can be inevitably misinterpreted as offensive and sometimes associated with youth. I think its cool that you aren’t afraid to share your opinions and stand by each other collectively. After all, as young woman, you represent your generation. Do you think young people look to you as role models?

As wild as it is, I think there are some people who view me as a role model. I try my best to always speak my mind and be unapologetic about my opinions which I think is important for young people, especially young women to see. Men have been able to speak their minds for so long without getting shit for it and I’m over it. Give me all the shit you want, it’s not gonna stop me.

I’m going to sound really old here, but I’m not. My introduction to Los Angeles new wave, punk rock goes back to the Go-Go’s. I’m a huge fan of Jane Wiedlin and Charlotte Caffey. Who are some of your influences that fans might be surprised to hear you talk about?

I am super inspired by Beyonce, Cardi B, and SZA

A big part of The Regrettes music is also that 50’s and 60’s vibe. Where did the passion for that era come from?

It’s the music that my dad has always had playing in the house so there’s something very special about it to me. It’s timeless.

Is it still frightening how quickly things have moved since your formation? What are some of the cynical things you have discovered already about the music industry?

Honestly it feels like the perfect pace. We are super lucky to have a really special and trustworthy team around us, so I don’t see too much of that however, I have noticed how people who I don’t know very well, who aren’t in the business, have become quite cynical. Once someone starts having some success on whatever scale, true colors shine through.

Finally, do you have any future plans to tour Australia? There is some genuine support here for the band.

Not at the moment but definitely at some point!! It’s somewhere I am dying to go. We can’t wait! 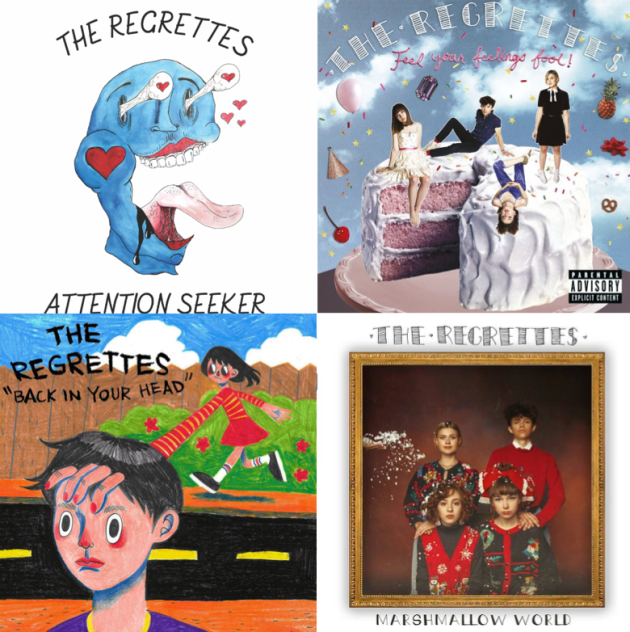 The Regrettes latest EP Attention Seeker and their recent debut album Feel Your Feelings Fool! are both available through iTunes. Listen to them on Spotify. Follow them on Instagram. Watch them on You Tube. You can also connect with The Regrettes via their Facebook page, twitter feed @regrettesband and their website.

Photo credit: The header image of The Regrettes is courtesy of Warner Bros. International and photographed by Kenneth Cappello. It cannot be used without their expressed permission. I am not the uploader of You Tube clips.

0 comments on “The rise and rise of The Regrettes: Interview with frontwoman Lydia Night.”