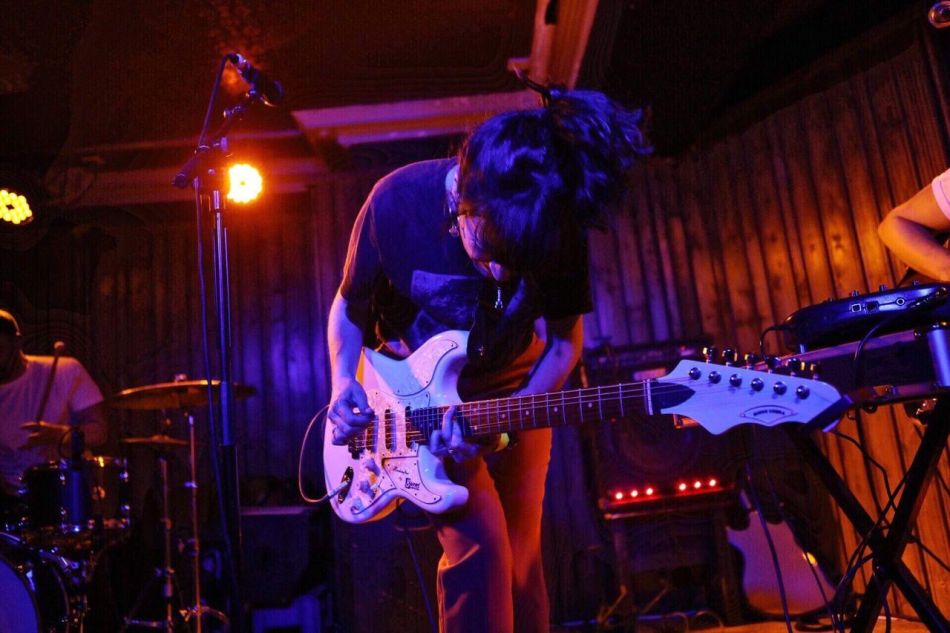 In another life, Sarah Howells was once a part of several musical projects, one of them in fact as one half of the Welsh duo, Paper Aeroplanes. In 2015, some five years after the release of their folk pop debut, her musical partner-in-crime Richard Llewellynthe and Howell decided to take a break. For Howells, the hiatus became a good reason to do something she always wanted to do – a solo project. So she swapped her acoustic guitar for an electric one (a Burns Cobra) and began to write songs and melodies about her own personal experiences and relationships. In short, the new solo project under the moniker of Bryde felt so liberating, especially after her first two EP’s, that Howells committed to eventually making her debut album Like An Island under her own label Seahorse Music.

With Howells, aka Bryde, currently on tour promoting her new solo album, I managed to sneak in a request to talk to her. Here is some of what we managed to talk about.

Paper Aeroplanes was a huge part of your artistic life. Going solo now, I’d imagine  it safe to say those days are behind you? That said, is your first solo album Like an Island meant to be a statement where you would like to go musically now?

It is behind me I think, yes. Although never say never. Like an Island is a statement in itself, but I never restrict myself to one style of music, and that’s the beauty of being solo artist to be honest. I feel free to create whatever I like whenever and wherever the mood takes me.

If I had to pick a few favourites from your new album Like an Island, I can’t go passed Desire, Less and Flesh, Blood and Love. Is there any one particular song that gives you goose bumps when you play it? Can you elaborate a little as to why it resonates with you so much?

That would probably be Less or To Be Brave. Less for me is the fun, a necessary release of anger I needed when I wrote it. It’s sarcastic toward myself and to another person and just feels totally defiant. Then there’s To Be Brave. When we play the end of it live as a band, it just builds into this cacophony of noise and as a song it’s already my most personal and emotional, so it feels exhilarating to play it out.

I get the impression that you love writing songs that have a sense of deep melancholy to them. You were always attracted to this form of songwriting?

Yes! I just am. For me songwriting is about expressing emotion, nothing else and those are the emotions that I feel compelled to pour into a song.

Can we briefly talk about Like an Island’s end track Steady Hearts. Can you tell me a little bit about how it came to life?

It just turned up when I went on a writing retreat to Deal, in Kent. Anywhere by the sea does it for me to be honest so I was traveling to all the seasides I could. It popped up during an otherwise fairly slow month of songwriting. I stayed in a small Airbnb which was essentially what we call a granny flat above an almost retired couple’s house. They were in most of the weekend pottering around and I could hear them and it made the writing session totally different to when I know I’m completely alone and can’t be heard.

It goes without saying that female artists quite often don’t receive the recognition they truly deserve. Sarah, how do you manage to rise above the double standards that exist?

Being successful in music is hard. For everyone. For loads of reasons. I’m a total feminist but to be honest I just try to get on with it and make music that’s good enough to be noticed and heard regardless of any hurdles. As a white person from a stable family who’ve given me over the years loads of financial and emotional support, I think making excuses would be lazy of me.

Besides being a performer, I understand you run your own record label and have signed up several artists. How did that come about and why?

The label was an experiment and it’s working well. It’s something I’ll focus on more in the future. Right now it’s about self releasing and asking the question, what’s the difference?

PJ Harvey is such a chameleon musically speaking with whatever she does next. You seem to have that same quality. Has anyone ever compared you to Polly? And would a compliment like that sit well with you?

I’ve had loads of comparisons to PJ Harvey. She’s amazing so I find it immensely flattering but take all that stuff with a pinch of salt.

I love how your guitar is front and centre in your music. Sometimes it’s grungy and at other times it has a folksy feel. What is your earliest memory of you playing guitar?

My earliest memory is playing the nylon string guitar my Grandad had lying around and with his help misguidedly putting steel strings on it. It definitely toughened up my fingers. Playing electric guitar again has made me feel like a guitarist for the first time ever.

I am a big fan of Ellie Rowsell (from Wolf Alice) and her activism and open encouragement to see more girls and young woman to pick up guitars. Do you hope to see more young women follow in your footsteps?

Ah yeah she’s doing great things and I think girls with electric guitars is almost… almost straight up regular now. Which is how it should be.

Finally Sarah, I’ve caught you at the beginning of your current tour. How excited are you about performing your new album live? How’s it being received?

I’ve been so delighted with how the album’s been received. We’re having a blast playing it on tour. The London show was our most exciting yet and mainland Europe is gloriously sunny. We’re pretty happy.

Photo credit: The header image of Bryde is courtesy of Sarah Howells and photographed by John Williams. It cannot be used without their expressed permission. I am not the uploader of You Tube clips embedded here.

0 comments on “Doin’ It For Herself: Interview with Bryde.”