SPOILER WARNING: Read at your own peril. There is a general discussion of the film’s content in the following review.

A few days ago, I went to see Solo: A Star Wars Story with little or no expectations, whether it was going to be good, bad or ugly, especially after the angst and uproar The Last Jedi caused, splitting critics and hardcore fans into complete opposite groups about their praise or distaste towards it. In truth there was plenty to worry about Solo, the fourth franchise film from Disney Studios, since Uncle George sold his control of the saga. In short, when directors Phil Lord and Chris Miller were fired during production last year because of creative differences, that alone called for many of us to breath heavily into a brown paper bag. But we weathered the storm as fans and despite many news agencies calling for blood, we were quickly reassured when Ron Howard stepped in to takeover directorial control. With nearly all subsequent reports coming out of Star Wars central following Howard’s appointment relatively positive we were all set for something special. That said,  I’d like to report, the origins tale of how Han Solo got his start as the stuck-up, half-witted scruffy-looking nerf herder, no wait, that’s still a little down the track (in Empire); sorry as a maverick space pilot/smuggler with a sense of purpose, unfolds beautifully in this prequel, set some ten years before the events of Episode IV – A New Hope.

We will never know what remained of the Lego duo’s (Lord and Miller) interpretation or original cut of the film, but Howard will be forever credited along with screen writers Lawrence Kasdan and his son Jonathan for having done a decent job in creating an entertaining Star Wars heist picture. As a welcomed addition to the Star Wars universe, it may not be as good as Rogue One, but it definitely shares that same gritty and gloomy mode, where corruption, greed and Empire rule with an iron fist. But beyond that, it also shares the idea of hope and rebellion.

In short, Solo: A Star Wars Story is also a fun film with plenty to like about it, despite relatively few surprises, given the fact that for example we were always going to see how Han gets his name, how he first meets Chewie or how Han wins over ownership of that iconic Corellian YT-1300f light freighter, aka the Millennium Falcon, from hustler and smuggler Lando Calrissian in an epic hand of Sabacc. 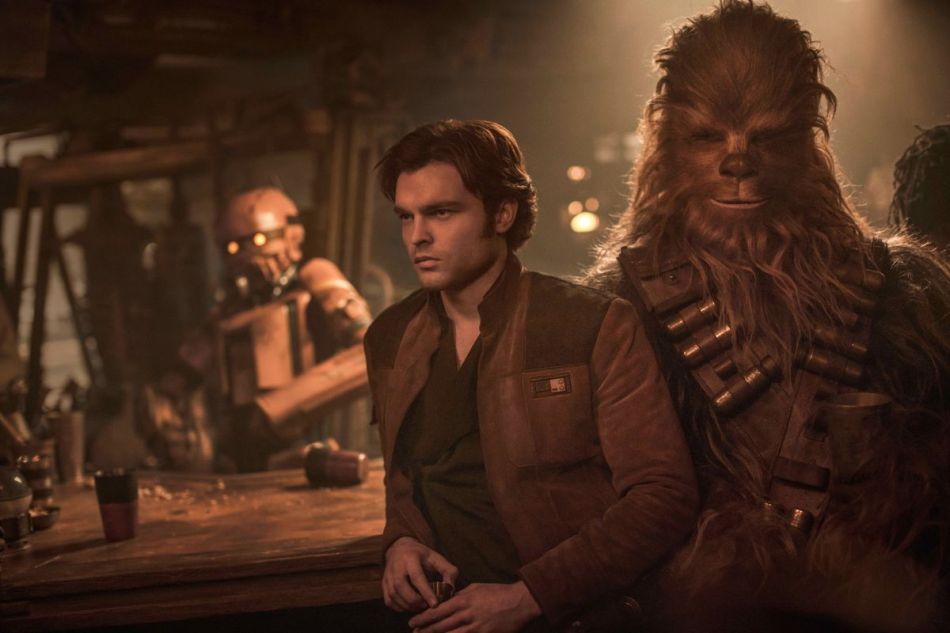 That said, some of the things that did surprise me included seeing Han as this vulnerable coming-of-age scoundrel struggling to find his place in the universe. The idea of heartbreak too, being separated, reunited and then presumably betrayed by his childhood friend and love interest Qi’ra (played by Emilia Clarke) also fascinated me in understanding what makes Han such an interesting Star Wars character. What the film surprisingly does well is also introduce us to a swag of villians, notably Dryden Vos (played by Paul Bettany), whom Han and the gang are indebted to, and hatch a plan to steal a batch of valuable coaxium from the mining planet Kessel, of course done under duress, especially because they don’t want to die at the end of Vos ornate red knives.

There are also plenty of Solo Easter eggs, along the way, like Han’s lucky gold dice and a particular big reveal at the end that works well expanding the Star Wars mythology. But if you’re a fan of the Star Wars animated series, The Clone Wars and Rebels, it’s probably not as big as a shock to find Darth Maul pulling the strings of the criminal group known as Crimson Dawn.

The casting of Solo: A Star Wars Story, when all is said and done, turned out to be a stroke of genius by Disney. Everyone is charming, even the villains, but especially Donald Glover as Lando Calrissian. I heard a friend say just yesterday that Lando is a scene stealer. Probably true, but does his overall presence steal the film? No, but he does try hard. Interestingly, Lando’s droid L3-37 (played by Phoebe Waller-Bridge) was a big welcomed surprise. Her rebellious nature and witty and sarcastic sense of humour was everything that I love about Star Wars droids. Her laugh out loud liberations of droids whom have had their so-called droid civil-rights violated is particularly memorable.  The fact that she also eventually becomes forever intergrated into Millenium Falcons computer system is awesome. Without her, a bragging Han wouldn’t have been able to claim his Millenium Falcon “made the Kessel Run in less than twelve parsecs”.

Arguably out of all the supporting roles I loved Chewie and his introduction in a muddy caged pit as a prisoner of the Galactic Empire. In the years gone by, I always thought it was Han who rescued Chewie from a life of slavery. But in Solo, it’s a little of both. The banter they share right from the get go, importantly sets the tone for the bubbling bromance that we would all come to love.

Then there is the ever reliable Woody Harrelson as Tobias Beckett, Han’s double crossing mentor, whom helps steer Solo to its entertaining conclusion. As Beckett, he warns Han not to trust anyone in life, that way you probably wont ever be disappointed. And so, when Beckett betrays Han and they face off with each other in the films finale, Han doesn’t hesitate to shoot (Beckett dead) first. This scene brings to mind how Uncle George tried to rewrite history through the Special Editions of the original Star Wars trilogy, insisting Greedo shot first and Han fired back a second later. Returning Han back to his original portrayal where “Han shoots first” arguably goes a long way to show what a coming-of-age Han must do to survive, especially if he is to become a hardened smuggler we eventually meet in A New Hope.

Emilia Clarke as already mentioned as Qi’ra rounds out the main cast of supporting characters. Her female fatale type performance leaving us with more questions than answers about who she became after she got separated from Han in their attempted escape of Corellia. It makes for great drama and even helps set up the possibility of a Solo sequel.

Last but not least, those who feared Alden Ehrenreich was a pale version of Harrison Ford’s Han Solo, owe this young actor an apology. Of course, Ehrenreich is not Ford, and it doesn’t come as a surprise that Ford encouraged him to “Make it your own” when it came to Han. That said, it might be hard for us after sitting through Solo for the first time to see Ehrenreich as anything but a young Han Solo without picturing Ford’s iconic portrayal in our mind’s eye. But in time Ehrenreich will eventually be etched in our subconscious as Han Solo, a lot like Ewan McGregor will forever be associated with Obi Wan Kenobi.

Photo Credits: The film stills from Solo: A Star Wars Story used in this article are courtesy and copyright material of Disney/Lucasfilm. I make use of the images under the rational of fair use, to enable me to makes an important contribution to the reader’s understanding of the article, which could not practically be communicated by words alone. In fact, I hope that this review helps to promote the excitement of the film.