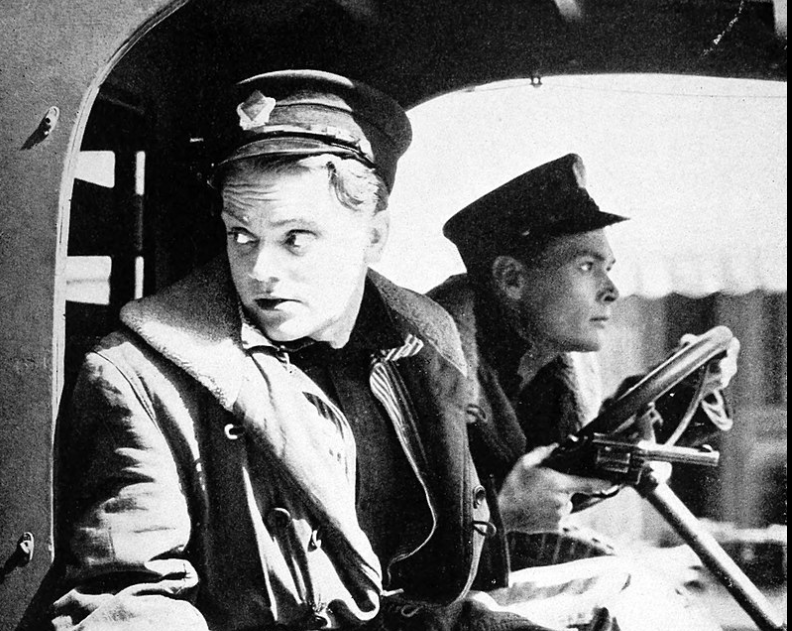 It was during the early years of the Great Depression, a time when Americans were cynical and jaded about their future and a place where infamous gangsters like Al Capone, Charles Dion “Deanie” O’Banion and Earl “Hymie” Weiss were repeatedly making headlines for all the wrong reasons, that Hollywood, in particular, Warner Bros. took advantage of this air of uncertainty and the notoriety of criminals, to create one of the greatest gangster films of the early 1930’s, The Public Enemy (1931).

In short, The Public Enemy, follows the lives of two young Chicago hoodlums, Tom Powers (James Cagney) and Matt Doyle (Eddie Woods), as they rise up from a life of poverty to become petty thieves, ruthless killers and eventually wealthy bootleggers. With an array of memorable scenes, the energetic livewire James Cagney, steals nearly all of them. Some of the more notorious scenes that come to mind first, include the crude execution of a horse and the shocking grapefruit-in-the-face moment, where Tom (Cagney) shoves a half-cut grapefruit in his girlfriend’s face (Mae Clarke). Even the next to last scenes, where Tom seeks out revenge on the gang who killed his best friend (Matt) and decides to deal out his own warped sense of justice is visually stunning. With only the sound of gunshots and screams, we are left to imagine the carnage.

For all its violent mayhem, The Public Enemy, some say desperately wanted to be a gangster film with a moral message. Warner Bros. even tried to address this by saying that it was not their intention to wholly glorify the life of gangsters. It was simply and honestly, according to Warners, trying to portray “an environment that exists today in a certain strata of American life”, a world where organised crime was a threat that the American public must truly confront head on. Importantly, the script itself does a seemingly fitting job at driving home that moral message through Tom Powers’ upstanding brother Mike, who tries desperately to pull Tom away from a life of crime, but ultimately fails to convince him. Perhaps, it isn’t until the very end, when Tom feels the brutal effects of a gang war and is lying in hospital with a gunshot wound, that he cleans up his act. Unfortunately, by then it was a little too late.

Photo credit: The header image is a promotional photo of James Cagney and Edward Woods in the film The Public Enemy. It is courtesy of Warner Bros. Pictures. I am not the uploader of the You Tube clip embedded here.