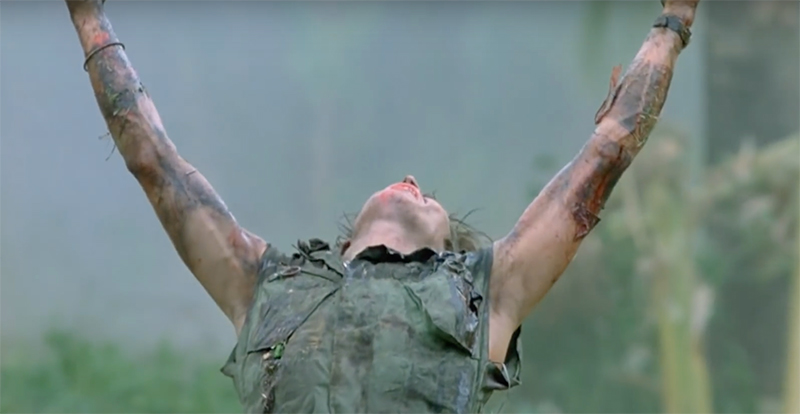 Oliver Stone’s Platoon fits easily in my top ten movies of all time. It’s a wonder I haven’t yet written a lengthy piece about it. This series in a funny way has allowed me the opportunity to finally talk about it, not at length, but at least about one of its most gut-wrenching scenes. But first some context here is important.

Inspired by Oliver Stone’s own war experience in Vietnam, the film follows nineteen-year-old infantry grunt, Chris Taylor (played by Charlie Sheen), who volunteered for military service because he believes it is his patriotic duty. But soon idealism gives way to horror, as he witnesses one bloody incident after another, with life shattering consequences.

But behind Chris Taylor’s story lies, an even bigger story, a tug-of-war for the possession of Chris’ soul, fought over between two of the films central protagonists, Sergeant Barnes (played by Tom Berenger) and Sergeant Elias (played by Willem Dafoe). Interestingly, Stone created this ‘tug of war’ over Chris and also the conflict that would arise between Elias and Barnes, as a way of telling two very different views of the Vietnam War.

With that in mind, it is somewhere in the middle of the film, in the climatic Village scene (inspired by the My Lai massacre) that Oliver Stone pits the conscience-stricken Elias, up against a seething Barnes, that lays the foundations for Elias’ demise. In short, when Barnes kills in cold blood the village chief’s wife and threatens to do the same to his daughter because he suspects that they are members of the Viet Cong, a horrified Elias turns on Barnes which escalates into a bloody fist fight. Not long after they exit the village, Elias reports Barnes to their commanding officer, but is told he will have to wait to officially file a war crimes report on Barnes upon returning back to base. In the meantime, the two are forced to begrudgingly agree to a ‘ceasefire’. But it is Barnes away from the scrutiny of the ‘top brass’ who continues to behave unapologetic, cursing and referring to Elias as “a waterwalker…like them politicians in Washington, (who) want to fight their war with one hand tied round their balls. Ain’t no time or need for a courtroom here…”.

As we skip forward a little, it doesn’t become completely clear until in the next major run-in with the North Vietnamese Army that Barnes plans to dish out his own brand of justice to Elias. In an opportunistic moment, in the jungle during the chaotic firefight, in the vicinity of a crumbling old French church, Barnes secretly shoots Elias before remorselessly walking away and declaring to Chris and a few others, that he had found Elias dead in the jungle.

With Elias presumed dead, and the situation untenable on the ground, the platoon is helicoptered out of danger. But as Chris sits back in the chopper, sick in the stomach, and grieving for Elias, he notices a solitary figure staggering in the jungle clearing. He cannot believe it, it’s Elias flanked by an overwhelming number of NVA soldiers, hanging on for dear life, trying to reach them. But unfortunately, there is nothing that they can do.

Set against the heartbreaking score of Adagio for Strings by George Delerue, Elias’ attempt to flee the pursuing NVA is in vain. The whole sequence leaves everyone, including the audience, wide-eyed and numb. You cannot help but feel emotionally upset watching the scene. And so, with his hands in the air, in a recreation of the famous 1968 photograph by Art Greenspon, Elias is crucified. Importantly, the scene ends with Chris realising that Barnes had deliberately left Elias for dead in the jungle. He throws Barnes a deathly stare, which Barnes registers, but in the end ignores it by looking away.

Photo Credit: The header movie still image of actor Willem Dafoe in Platoon is presumably owned by Hemdale Film Corporation. I make use of the image under the rationale of ‘fair use’ to help illustrate arguably one of cinema history’s greatest scenes. It also enables me to makes an important contribution to the readers understanding of the article, which could not practically be communicated by words alone. I am not the uploader of the You Tube clip.

3 comments on “Cinemas Greatest Scenes: The Death of Sergeant Elias.”