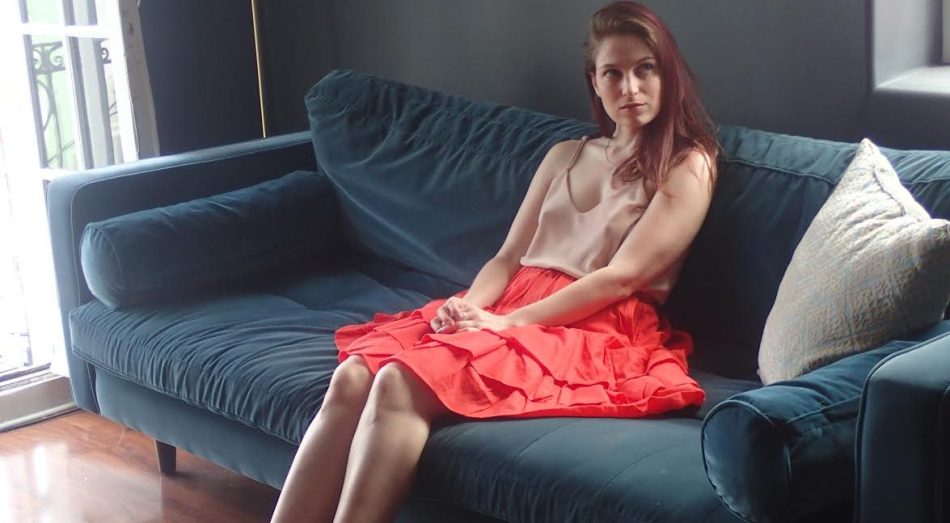 Talking with artists about their music and ideas is at times tough, especially if you are dealing with a stressed out New Yorker. Fortunately for us New York City singer songwriter and multi-instrumentalist Sabrina Stone is good-natured and far from my stereotypical view of many New Yorkers I have met. Having touched down a few days ago in Melbourne, we are in for a real treat as Stone prepares for her first Melbourne show at The Toff, where she plans to play songs from her forthcoming new album International Date Line. In our exclusive with her, we recently talked to her about her music, travel and New York City.

It’s always exciting discovering new artists. I must confess though, you are a little bit of an enigma at the moment. That alone intrigues me. Sabrina, can you tell us something surprising about yourself?

Surprising? Well, a few years back, I was seeing someone in New Zealand. As a songwriter, I like my space, so, long distance relationships work for me but I live in NYC. That was officially too far. That sort of distance will test your heart and your sanity.

We’re both writers, so we made it through a pretty good chunk of months, on the strength of our obnoxious witticisms and shared conviction but, ultimately, we failed. I actually think we were together longer than we would have been, if we had lived in the same town. The distance gave it this heightened sense of excitement and importance.

I wrote a lot, during that time. Some lyrics were sad, some were cheeky, some were wildly romantic — it created the foundation for an album called, “International Date Line”. Recording it took years. I insisted on writing every note for every instrument, including a few I do not play. Writing out cello parts in Alto Clef was almost as challenging as the relationship itself had been. I was, apparently, still enjoying the suffering.

I put so much work into that album that I thought it deserved to be heard on both continents that inspired it so, the moment it felt truly and completely done, I quit my jobs and bought a flight and now I’m here!

Talking about you new forthcoming album International Date Line, you privately shared with me what I can only assume is a sneak peak of one of your new songs called Capsized. What can you tell us about how that song came together?

Capsized is the first song off the upcoming album. It sets the scene of what it would be like to choose a love across the ocean above everything you’ve ever known. It’s this sort of imagining that starts with the lyrics, “I dreamt that I was capsized on an island in the sea and there was only one thing that I could take with me, so I took a pen and made a list of 50 things I love and when I was done, I circled one, it was, “all of the above”. Then the song goes on to list all of the little daily loves and annoyances. (I found I missed them equally.)

Is your single No Surprises, released earlier this year, also a taste of what is to come on your new album in terms of its sound and layers?

That single is actually a Radiohead cover, so it’s a taste of what I listen to and what I’m inspired by. It’s a very dark song that beautifully encapsulated a very dark time in my life, allowing me to move past it.

I’d like to hope the new music is a drastic departure into sunlight.

Also, the track is pretty stripped down. It’s mostly just me, playing and singing, with a bass and a guitar solo. The new album has a whole string section!

Looking back to your early years what do you remember being the inspiration behind why you wanted to play music?

Oh, simple. I was good at it. From the moment I started playing, it was clear that I was really playing music, not just doing homework. Who doesn’t want to do something they’re good at?

I understand you began playing classical piano at age seven. How did your lessons with the piano extend across to eventually playing various other instruments?

Have you ever tried lifting a piano? Hah. I needed something more portable but I was also 14-years-old. What I really needed was something that would make me look cool. My main instrument for composing is guitar but I’ve been traveling, these past few months, with my little electric ukulele. It’s ridiculous looking, ’cause it’s styled like an Epiphone (it’s made by them), so it’s a bit of an anomaly and makes people giggle, which brings me joy.

There are obvious hints of folk and Americana in your music. How would you describe your music? Maybe more to the point, what do you believe your music says about you?

Is there? Hah. I guess so. I do have a lot of favorite Americana artists: Chris Thile, Ryan Adams, Paul Simon. I also love Led Zeppelin, Nine Inch Nails and St Vincent. The thing is, if you play an acoustic instrument, you’re always going to sound slightly folksy. I’d say I’ve got more of a jazzy pop vibe, with occasional spells of rocking out.

Oh, I’m sure my music reveals all sorts of things about me that it probably shouldn’t. That’s the main reason I have lots of “stage songs” that have never made it to the Internet, even if they’re crowd favorites. My mom still makes it out to a ton of my shows though, so it’s not like I’m hiding much!

Almost without fail, New York, New York by Frank Sinatra comes to mind when I think of NYC, especially (and I’m paraphrasing here) when Frank sings that if you can make there, you can make it anywhere. What has your journey been like playing music and living in New York City?

When I think of NYC, I think of LCD Soundsystem’s, New York, I Love You, But You’re Bringing Me Down. (I think most musicians do these days.) It’s a place that’s absolutely filled with art and music and theatre and comedy but it’s an over-saturated town, which makes it, often, unfriendly and competitive. New York is a place to work (and a great place to visit) but not, so much, a place to write and a place to thrive as an artist. Audience is built by traveling and touring (so is experience and adventure!)

You have played in some great clubs including New York’s The Bitter End. How surreal does it feel knowing musicians like Joni Mitchell, James Taylor, Neil Young and Lady Gaga have played there?

AND Bob Dylan. Hah. I knew I couldn’t get through this interview without sounding like a dick! So, I’ve not only played at The Bitter End, I’ve actually played 30 shows at The Bitter End. As soon as I was of-age, I was up on that stage. What I love about how respected the place is, is that the sound guy makes me sound like i’m made of magic. Even better, a bunch of my favorite musicians play and hang out there and, occasionally, they’ve hung out at my shows. I never lose sight of the fact that it’s a national landmark, but, at the same time, it’s my living room, my home base.

If I suspect anything about you, Sabrina it is that you certainly love to travel. A while back when I interviewed Courtney Marie Andrews she said “Australia is beautiful. It feels like vacation touring there and the crowds and people are so fun”.  How important is it to you to see the world? And what are you hoping to get out of your summer visit here in Melbourne and Sydney?

Saying i love adventuring is accurate. Australia is my 32nd country. I got off the plane 5 hours ago and I already know that 6 weeks won’t be enough here. I just spent a month in Bali and, knowing me, these are just teasers. Every time I travel, it only makes me want to travel more. If I truly put all the pictures on Instagram, I wouldn’t have a friend in the world. Hah.

The music scene in Melbourne seems hugely supportive. I had to find a band to play with, for my gig at The Toff, so I simply reached out to a bunch of favorite musicians. They actually wrote back to me! Hannah Blackburn, Jess DeLuca, Will Coyote, Ruby Gill, Hollie Joyce, Jesse Witney, Amy Powell, David Western, the guys from Hot Springs, Jane from Broads…. They were all super lovely and helpful and warm! In NYC, that would never happen. you would get a cranky response from someone’s overworked manager. I have a really good feeling about this place. 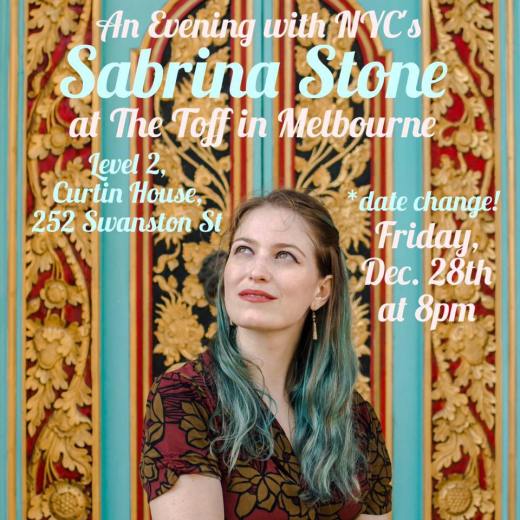 Tickets for Sabrina Stone’s Melbourne show on Friday 28th December at The Toff are available HERE via moshtix. Booking information on her Sappho Sydney show on Saturday 12th January are also available HERE.

Photo credits: All images are supplied by Sabrina Stone. They cannot be used without her expressed permission.