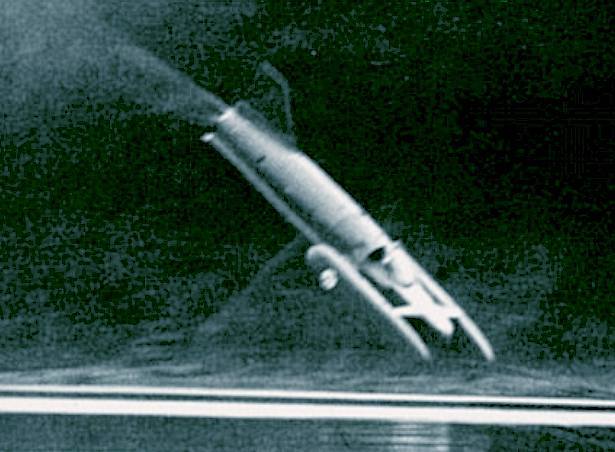 Briton Donald Campbell lost his life doing what he loved best on January 4th 1967. He lost control of his all-metal turbo jet engine speedboat, Bluebird K7, which bounced three times, before somersaulting into the air and crashing into the water at very high-speed on Coniston Water, in Lancashire, England. Campbell was killed instantly in the accident.

On the fateful day of his crash, he was trying to break a new water speed record in excess of 300mph when tragedy struck, but it is said he may not have died if he wasn’t so stupidly obstinate. You see Campbell lived under the huge shadow of his dismissive famous father, Sir Malcolm Campbell, a successful high-speed racer, who held various land and water speed records in the 1920’s and 30’s. And so in an attempt to emulate his father’s success,  Donald did everything he could to prove him wrong with his own daredevil antics and often reckless pursuit of speed.  In so doing, he gained notoriety, becoming a multiple land and water record breaker in his own right. But it is his horrible crash that he is best remembered for, even more so than any of his previous record-breaking attempts.

In the middle of 2018, the infamous Bluebird returned to the water for the first time since 1967, where it successfully completed a series of test runs at speeds of 150mph. Interestingly, it spent more than thirty years at the bottom of Coniston Water before a dedicated team of enthusiasts and volunteers recovered not only the Bluebird but also eerily Donald Campbell’s body out of the water in 2001. (Campbell was buried in the village of Coniston later that same year.) After nearly two decades of painstaking restoration the Bluebird will now reside in the Ruskin Museum in Coniston in honour of Donald Campbell and the team that restored it back to its former glory.