Roses and Cigarettes are back in a big way in 2019 with the release of their sophomore album Echoes and Silence. There is so much to like about it from its classic Californian sound to its vulnerability and fearlessness. As I said recently in my review its an album that begs for repeated listens. So, if you’re one of those people who like myself occasionally gets lost or can’t decipher what songs are about, here’s an exclusively insider’s look at R&C’s new album, where Jenny Pagliaro and Angela Petrilli run us through the meanings, motivations and stories behind every track on their best effort yet. Take it away R&C!

Fast As I Can

J – This song was written about my battle with Stage IV Breast Cancer. It’s about not letting the biggest challenge you’ve ever faced stop you from living your dreams.

A – I was watching Ted (Jenny’s adorable dog) at Jenny’s while she was in Tahiti. I had just come back from a church gig and I remember being so deeply touched by a song we had played that evening. Michelle Crenshaw (the mother of Harrison and Phoebe Crenshaw (additional background singers on a few tracks from Echoes and Silence) had sung this beautiful song. I knew I would go home and write something after hearing that. I was so inspired. I sat on Jenny’s couch and grabbed my Martin and channeled the feelings I felt. I wrote the entire song in about 10 minutes. After Jenny came back home we tweaked the bridge and that was it!

J – Echoes and Silence is about feeling lost, like no one can understand you. Through my journey having cancer I have felt overwhelmed, and like nothing would ever be good again. This song explores those areas of darkness, and loneliness.

A – I honestly don’t remember writing the song. The chords presented themselves to me one night. I tried a new alternate tuning I had never played in before and the song wrote itself. In 5 minutes the entire structure was there. I emailed Jenny the track and said, “I know it’s very different from what we’ve done before, but I think there’s something here. I hope you like it.” I was very drawn to the open tuning. It leaves you feeling a bit uneasy, and so do Jenny’s lyrics.

J- Back to you is about knowing you shouldn’t keep falling for the same person, but not being able to help yourself. You know it’s not good for you, but you just don’t care!

A – The verses of this song were written on a bench outside of the Old Place in Agoura Hills, CA during a break we had. I remember wanting to write a song with a chord structure that wasn’t totally expected (F minor to F major in the choruses.) This was one of the first songs we wrote for Echoes and Silence, and it catapulted me to start thinking about chord structures in our songs differently. 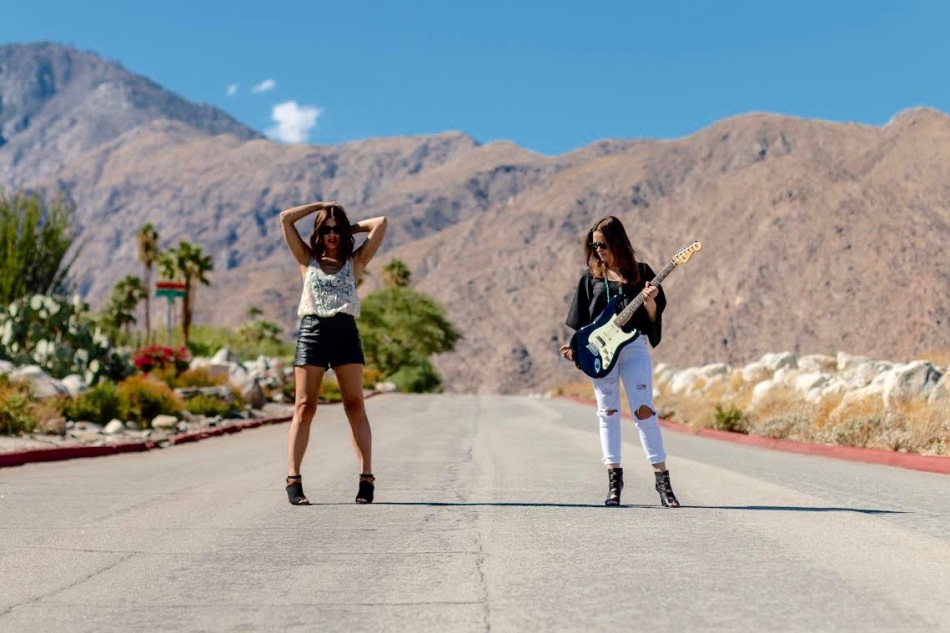 A – We had been over at Jenny’s for a songwriting session and she sat on the floor and started to sing the chorus of the song. I found the chords to the notes she was singing and the song was born. When we first wrote it, it clocked in at 6:30 mins, so we had to cut parts! Haha! We are so honored to have Marc Broussard sing along with us on this track. His voice and Jenny’s voice together is really something special.

Bones On The Ground

J – This song is about that person that just won’t get out of your life. No matter how many times you have kicked them out they keep coming back around.

A – I had written the opening riff before the release of our debut album. It was a really hooky rock riff that I knew immediately would be an R&C song. It haunted me for years, I just couldn’t find the right launching pad. On the day Chris Cornell passed away I was really upset and Jenny invited me to come over to her place to write, because she knew I needed it. I asked Chris that night to help us finish the song. He did. I always think of him and thank him when we play it.

J – Feel The Fire is about the beginning of a relationship. You can feel the tension building with someone but no one is making the move!

A – This one was the most stubborn song we’ve written. I want to say it took about 6 months to get the song to match the vibe Jenny had in her head. Jenny first came up with the chorus and sent me the file and we went back and forth on trying to find the right feel for the song. I remember writing the chords for the chorus in a minor key and it just didn’t work. It didn’t fit the story Jenny was telling. Once I changed the chorus to a major key, it uplifted the song, and it clicked. Plus the bass lines and rock drums really hit it home.

J – This song is about the end of a relationship. You haven’t been getting what you need and you’ve reached your limit.

A – This was the first song that was written for Echoes and Silence. I came over to Jenny’s house one afternoon and she said she was fooling around with this song on her guitar. The second she sang the verse and chorus idea, I immediately loved it. I’m so glad we explored this song together. Jenny’s lyrics in this song punch me in the gut every time. It’s so raw and real. Her vocal performance brings the imagery she sings about to a whole other level.

J – California Going Home was written about a relationship that didn’t work out but the love there remains. Not everyone will stay forever and this song is about appreciating that person for who they are and where they are, even if it means your heart is broken in the process.

A – This was the last song we wrote for the album. We were over at Jenny’s house, and we were talking about needing one more rock song for the album. I sat on her couch and summoned Janis to help us out. The chords literally poured out from my hands. Jenny and I looked at each other and immediately she grabbed her phone and recorded it. The song came together fairly quickly on both sides. I knew after recording the first album that I wanted album 2 to have a song with harmonizing guitar parts too, and this song was the perfect vessel for that John Mayer/Allman Bros sound we were going for on this track.

Whispers In The Wind (Stacie’s Song)

J – This song was written about my friend Stacie who passed away from Breast Cancer. She was a very bright light and always SO supportive of my musical dreams.

A – I wrote the opening riff during a session in the valley. The engineer heard the riff and his eyes opened up big, and I told him, “Hands off! This one’s an R&C song!” I really wanted to have a song in open tuning for this album. When I sent Jenny the track, she came back with a beautiful tribute to Stacie. It’s a hard song for both of us to get through. During the interlude where it changes key, I wanted that to represent the line “for what I’d give for one more with you.” What would that sound like? How would that make you feel? It was very important to have the key go back down from A (the interlude) back to G, because that moment will never happen again in this life. As Jenny says in the song “Time moves fast, moments don’t last.” I wanted to explore those feelings in this song with my guitar.

*Roses and Cigarettes cover of Joe Cocker’s Bye Bye Blackbird has been omitted because we are only looking at R&C’s original tracks.

Echoes and Silence is also available on Apple Music, Soundcloud and Google Play or anywhere you prefer to stream your music. Also check out Roses and Cigerettes online store for more music and merchandise.

Photo credit: All images used are courtesy of Roses & Cigarettes.