Thirty years ago today, America’s greatest cyclist Greg LeMond won the closest Tour de France in history, with a victory margin of only eight seconds. Here’s how I remember it.

Rarely is the Tour decided on the last day of racing. In the days leading to the final day, the battle for the Tour is often already won after the last mountain stage battle or when the last major time trial has been raced. Whoever is in the lead by then, usually goes onto enjoy the theatrics of the last day as winner of the Tour De France. With the status quo largely enforced there are some laughs, relieved faces, photographs and a sip of champagne; with the serious racing of the final day left until we arrive on the streets of Paris, where the sprinters get their last chance to shine. Only an absolute disaster would deny the expected winner of glory. In saying that the 1989 Tour was turned on its head in arguably the most exciting last day (of racing) in Tour history!

In that year, Paris would host what was expected to be a short boring twenty-four kilometre individual time trial on the last day of that Tour. Frenchman, Laurent Fignon, was expected to win –already a two-time winner, in 1983 and 1984 – and on the verge of his third Tour victory. Except, somebody forgot to tell Greg LeMond that he wasn’t supposed to pull back a near impossible 50 second deficit. Analysts and critics alike believed LeMond would, of course regain some time – possibly one second a minute – but the stage was far too short to regain – two seconds per kilometer – the entire deficit.

Dressed like a Martian from outer space, with his aerodynamic bike, LeMond had nothing to lose as he sizzled around the time trial course from Versailles to Paris. It is in an amazing moment captured on camera, when Fignon finally arrived at the finish 58 seconds behind LeMond’s scorching time, that LeMond is seen visibly stunned having won the Tour. Kathy LeMond is heard screaming “You’ve won Greg! Oh, my God, you’ve won!” Everyone is utterly shocked! Newspapers worldwide had to rewrite the fairytale ending too. LeMond had won the final stage and the Tour by only 8 seconds! It was the smallest winning margin in Tour history. It is fair to say that no Tour since then has eclipse the 1989 incredible comeback! It is hard to see any other Tour in the future ever being decided by only a handful of seconds again?

Two long years of sorrow, pain and misery almost saw LeMond quit the sport. He only managed to find his mojo again after finishing second in the final individual time trial stage of the Giro d’Italia. LeMond’s hopes of doing well in the ’89 Tour finally looked brighter. He hoped for a high place finish, but after winning the stage six time trial against reigning champion Pedro Delgado by 24 seconds, he aimed instead for a podium place finish. Not until on the eve of the last day of the race, did he believe he could actually still win it. He went on to say after the Tour that, “I have put out one hundred percent the last two years; a heck of a lot of training, a heck of a lot of suffering, a heck of a lot of pain to get where I am now…I knew I would have the last say.” 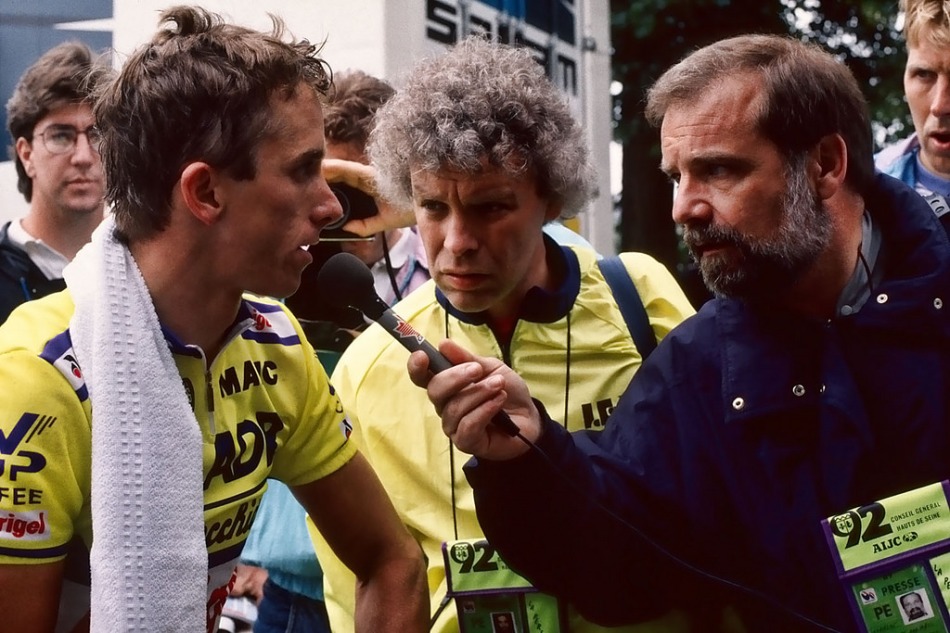 Laurent Fignon had equal belief that he could win the Tour on that last day too. The 1989 Tour went according to plan. He was in good health again (after years of injury), his morale was good and he was slightly stronger than LeMond in the all important mountain stages. At Alpe d’Heuz, he retook the yellow jersey and the remainder of the Tour should have been a formality for Fignon. But Fignon appeared worried, he even lashed out at French television by spitting at the camera the night before the final stage. Fignon had everything to lose, while LeMond probably would have been content with 2nd place, a “moral victory” considering the horrible last two years he endured to get back to competitive form.

In the mid-afternoon heat, on the 23rd July 1989, LeMond set out flying at full tilt from the starting ramp with one thing on his mind – victory! Before the race he told his team director not to tell him the split times with Fignon. It would only distract him. He planned to go all out in the hope that he would make up the deficit against Fignon. Furthermore, everyone knew LeMond had nothing to lose, therefore he thought if he did his best, he would have nothing to regret.

Fignon, in contrast, never seemed to find his rhythm. He looked uncomfortable and worried on his road machine. In fact, Fignon was suffering from saddle sores and as hard as he tried to push himself, the more he seemed to go backwards. At every single time check, the Frenchman was behind LeMond. In the end, Fignon couldn’t keep up the blistering speed of LeMond and crossed the finish line too late to hold onto the yellow jersey.

LeMond’s jubilant face said it all. He had overcome adversary in his personal and professional life to win a second Tour. Interestingly, his amazing time trial was the fastest in Tour history at 54.545 km/h, until Chris Broadman beat it in 1994, with an average speed of 55.152 km/h. Broadman’s record was however only over 7.2km, when compared to the distance of 24km covered by LeMond. Even compared to Rohan Dennis, who last year beat Broadman’s time, by clocking 55.446 km/h over the distance of 13.8km, LeMond’s time trial is still impressive after all these years.

LeMond would go on to win his third and final Tour in 1990. He would retire in 1994 the greatest American and non European professional cyclist of all time. Fignon retired too, in the early nineties in 1993, unable to keep up with the pace set by the new generation of cycling stars on the rise. In the years after the 1989 Tour, Fignon grieved privately about losing the race. Later in his autobiography, he admitted that he never truly recover from his defeat at the hands of LeMond. Though he was always still proud of the fact that he was a two-time winner of the Tour. When Laurent Fignon died in 2010 from complications of cancer, LeMond said, “When he lost the Tour de France in 1989 it was one of the few victories where I felt we both won. The saddest thing for me is that for the rest of his career he said he won two Tours de France, when in reality we both could have won the race. He was one of the few riders who I really admired for his honesty and his frankness. We talked about a lot of different things outside of cycling and I was fortunate to really get to know him when my career stopped. I believe he was also one of the generation that was cut short in the early nineties because he was not able to fulfil the rest of his career. But he was a great rider.”

Indeed, we have both men, LeMond and Fignon, to thank for providing the greatest drama in living memory.

I originally wrote this article in 2016 for Aaron Crisp’s Cycling History. It was the last entry in a three week series that focused on the Tour de France’s most memorable stage stories from the race’s history. I have taken the liberty to post it here with Aaron’s blessing.

Photo Credits: The header image is Greg LeMond racing his time trial bike during stage 21 of the 1989 Tour de France. I make use of the images under the rational of fair use to highlight LeMond’s ‘dressed like a Martian from outer space, with his aerodynamic bike’ appearance. It also enables me to makes an important contribution to the readers understanding of the article, which could not practically be communicated by words alone. The image of Greg LeMond being interviewed by reporters at the 1989 Tour is by flickr user Brian Townsley and is used under the Creative Commons Attribution 2.0 license. The two photographs featuring both Greg LeMond and Laurent Fignon are licensed and used under the Getty Images embedding service.  I am not the uploader of the YouTube clips.

1 comment on “The day the Tour was turned on its head: Lemond’s Incredible Comeback.”