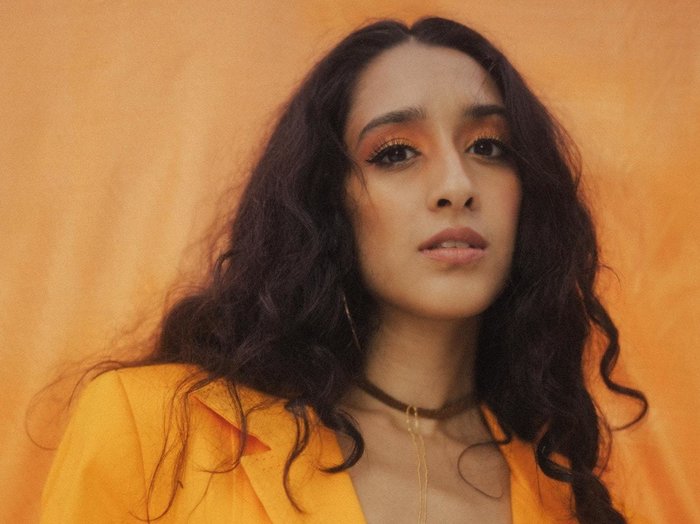 I am personally more of an album kind of guy but not stupid enough to realise that it takes great songs to fill them. “Duh”! Though I have to say while I would love to reel off a playlist of all the amazing songs this year that inspired me, I fear I would be here forever. Therefore, I’m going to get straight to the point and name the six tracks that said something about my listening habits this year. Enjoy!

Under the guise of an otherworldy R&B soundtrack and her soulful voice, New York-based Indian American singer Raveena takes the listener on a journey to hell and back (so to speak) on her conceptual based debut album Lucid. It’s an album that peels back the layers of Raveena’s pain and the heartache she bottled up as a teenager, before eventually changing tact giving rise to the power of love and self acceptance and its healing power. That amazing arc of pain and healing is no better felt by the time we reach the song Mama. (It’s further dealt with in Floating and the album’s final track Petal.) For me, while the song is a personal dedication to Ravenna’s mother, it is an entirely relatable song to draw parallels to our own mothers and also in my case, my dear mother-in-law who passed away in recent years, who led a rewarding yet at times trying existence.

Ty Segall just doesn’t know when to let up! The hyper-prolific guitarist and singer songwriter has released First Taste his twelfth solo album in an incredible eleven year period since his debut. True to form Segall manages to surprise and mix it up on a garage-punk-psychdelic-rock album worthy of anything he has produced in recent memory. On several of his tracks I really like his distorted vocals and manical drumming. Moreover, the experimentation of bouziukis, mandolins, kotos and Beatles-esque trappings makes First Taste a lot of fun to listen to. Standout tracks include Taste, The Arms and I Sing Them. Please note, Ty Seagulls music video for Taste here below is overtly violent in nature. I certainly don’t condone it. Segall does a lot of weird shit and to be honest I don’t understand why he went this way with it. I like the video’s drum intro with Segall but that’s about it. Good song, bad video.

Those who know me, know I love Lana Del Rey; and what makes her so fucking irresistible is that she can swoon on just about everything she does – and make you believe in her existential dream world. That said, arguably one of the best songs released this year is Del Rey’s upsettingly beautiful The Greatest. Instantly recognisable, wrapped up nicely as a pop rock folk ballad with plenty of #Lana-ism, the spectacular track comes from the sixth studio album Norman Fucking Rockwell; and hits upon issues about poltical anxiety, climate change and even celebrity culture: “The culture is lit, and if this is it‚ I had a ball / I guess that I’m burned out after all.” In short, The Greatest looms as a song that signals our longing and uncertainty in moving forward, which is why it makes it an overwhelming beautiful piece of work.

I have quietly admired the exploits of R&B singer, songwriter, poet, educator and community activist, Jamila Woods for some time now. She is truly an extraordinary woman. Earlier this year she released a concept album celebrating the people who have inspired and made a lasting impression on her. On Eartha for instance Jamila celebrates the late icon Eartha Kitt. (I am familiar with Eartha from my geeky fascination with all things Batman. Eartha starred in the third and final season of the original Batman series in the late 1960s as Catwoman.)

Interestingly, the accompanying music video for Eartha highlights the late icon’s legacy directed by Jamila’s best friend Fatimah Asghar. In a press release for the music video Asghar explains the inspiration behind it:

“Jamila’s song ‘EARTHA’ pays homage to Eartha Kitt’s defiant spirit, and her refusal to compromise in a world that is always trying to constrict women and femmes. In the production, we wanted to reference iconic images of Eartha Kitt and embody her energy to create a celebration of unapologetic femininity and sisterhood, as well as play on and challenge the ways that women have been historically portrayed in cinema by going for an old-school film vibe. As Eartha taught us, being feminine isn’t just one thing– it’s an incredible range. That energy permeates the video.”

The insanely huge track that was far from what you’d expect to be a number one hit was Billie Eilish’s Bad Guy. With its trap-pop synth bass and Billie Eilish’s breathy vocals, I can’t tell you how many times I was caught in traffic in my car making weird dance moves. If anything my shame and embarrassment allowed me to roll down my window and exclaim “Duh’! The effect Eilish has had on pop culture this year was second to none. In fact, the dark stirrings of this Gen Z singer-songwriter has put the music industry on notice. Moreover, on your way out this year, check out the completely surreal music video, arguably the best thing about this aloof and somewhat austere figure.

For well over a decade Idaho native Eilen Jewell has charmed the pants off her loyal fans as ”one of America’s most intriguing, creative and idiosyncratic voices”. Well that’s what they say anyway. I’m new to Jewell and her eighth studio album Gypsy is my introduction to her country-folks blues leanings. So while I will need to spend a little more time listening to her music, I have to say I already really taken by what I’ve heard so far on Gypsy. From the personal to political, Jewell covers an array of territory as a songwriter; and its kind of cool that she concludes the album with a gorgeous little stripped-back acoustic track called Fear, where she tells us to seize the day and not fear be our guide. Incidentally, that peculiarity in her vocals everyone keeps going on about is pretty much spot on. It comes across as comforting like a welcomed old friend you haven’t heard from for a while. It’s almost like she stepped out of country music’s golden age and into our modern world. Musical standouts include 79 Cents, Beat The Drum, Witness and Crawl. The latter in particular exemplifies everything I like about Jewell.

I have an extraordinary amount of time for someone like Angie McMahon who affirms her faith in wanting to ”rock out” like Springsteen, Neil Young and Bon Iver. Her debut album Salt is a wonderful example of what modern rock should be, with McMahon’s intoxicating jangly electric riffs and reverb tinged rough and ready guitar. Of course, what brings all these elements together is without a doubt her extraordinarily cathartic songwriting chops and her heavenly raw voice which often draws wonderful comparisons to Florence Welch. With that in mind, I can’t go passed McMahon’s Keeping Time as one of my favourite songs of the year.

Nick Cave has been on my radar on and off for years. He’s not someone I can listen to all the time, so small doses of Nick Cave & The Bad Seeds is all that it takes to be reminded of his genius. More recently I check in to read his Red Hand Files website, where he answers questions from fans, which I highly recommend even if you are only a half-hearted fan. A few weeks ago, a fan asked Cave “When can we expect a new album?” You know, Cave will answer almost anything, and to the surprise of many, he announced his new double album Ghosteen via his website, in which we learn that Ghosteen is describes as ‘a migrating spirit’. There is also a curious “children”/”parents” description of the double album that feels so Nick Cave. In short, Ghosteen is Nick Cave at his best. While I wont pretend that I wholly understand Ghosteen’s existential and mystic world, his poetic lyrics are still worthwhile trying to decipher. If anything the blissful soundscape of cinematic sounds of Ghosteen is breathtaking, especially Cave’s deep dark vocals, something that still haunts and amazes me all at once.

One of the songs that has plenty of heart is the album’s standout track Seventeen. It sits poised amongst a bunch of other strong emotive tracks on the album, in which Seventeen for my mind feels the most contemplative of the lot. In the song Van Etten looks back at a time in her life when she was poised for the future, a time when she felt free. But with freedom comes a scary lack of certainty, something that Van Etten knows all too well about, as she reflects upon her experiences and talks to her younger herself throughout the song. “I see you so uncomfortably alone / I wish I could show you how much you’ve grown.” Seventeen is truly one of the year’s most beautiful songs.

The American indie rock-folk band Big Thief has been actively invading our consciousness since 2016. It’s incredible to think that just a few months they released their fourth studio album called Two Hands. It comes hot off the heels of their third album U.F.O.F which was released earlier this year also to critical acclaim. Two Hands, sees this indie rock folk quartet combine some of the finest simmering folk rock music and intimate songwriting I’ve heard in a while. It’s arguably the best thing they have recorded thus far. One of the album’s indisputable standouts is Not – a lively grungy distorted guitar driven track that bursts to life midway through the song with an epic guitar solo by frontwoman Adrianne Lenker. Moreover, it’s a hauntingly beautiful protest song that finds Lenker listing all the things that aren’t the problem. It’s like she just can’t pinpoint the overwhelming frustration that she feels or the things that are worrying her. On the other hand it almost feels like its not just one thing but everything!?

Photo credit: The header image is courtesy of Raveena Aurora.