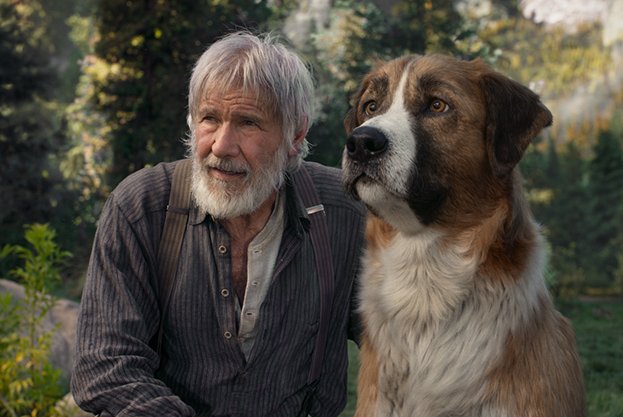 My two-year-old border collie/kelpie cross has warmed our hearts so much, since we rescued her from our local dog shelter last year, that I can’t believe we never got a dog sooner. In fact, Layla is the first dog I’ve ever owned and in discovering all there is about her, I’ve inadvertently become a sucker for dog adventure movies. In truth, I guess I was always a sucker for dogs onscreen. Looking back, my television set as a kid featured countless Benji and Lassie movies. More recently, sitting through A Dog’s Journey (2019), the sequel to the 2017 film A Dog’s Purpose, all but proves one thing, my emotional connection to dogs had reached a point of no return.

Imagine my surprise when I heard the first new film release by Disney’s new 20th Century Studios would be the canine adventure movie The Call of the Wild. It’s safe to say, this sucker was first in line to be taken aback by the screen stealing giant St. Bernard/Scotish collie cross called Buck.

But in this new sanitised adaptation of Jack London’s classic novel, Buck is something of a surprise, a CGI animated creation that has critics scratching their heads. Apparently compared to Jon Favreau’s photorealistic Jungle Book or Albert Hughes’ Alpha, some say Buck lacks bite.

The fixation over the CGI is bemusing to me. Yes, at first Buck’s CGI presence bothered me, but soon you forget he is not a real dog. Moreover, it’s quite canny how much of Buck’s mannerisms mirror what I love about say for instance my dog. Credit, of course, must be given to Buck’s stand-in, motion-capture choreographer Terry Notary, who apparently did his darndest to study canine mannerisms in preparation for the role.

I’ve never read the Jack London book, in which the film is based on, and in truth you don’t need to, to appreciate an old fashioned adventure story. Told from the perspective of Buck and narrated by legendary actor Harrison Ford, the film takes place during the Yukon Gold Rush of the 1890’s.

Over Ford’s gravelly narration, we are first introduced to Buck, whose spoilt existence on a homestead comes crashing down around him, when he is stolen and shipped off to the Yukon, whereupon he experience the dangers of a new life (and brutality of man) far away from the comforts of Southern California. To Buck’s credit though, he finds a good home in mailman Perrault’s (Omar Sy) sled dog team. It is here that some of the film’s big-hearted moments play out as Perrault and his team race to deliver the mail on time, set against some wonderful scenery, despite it being completely CGI generated. Along the way, of course, no adventure is complete without danger, which seemingly lurks from everywhere in the inhospitable Yukon. Also watch out for Buck’s run-ins with the sled team’s spiteful alpha dog, who is threatened by Buck good nature and heroics.

But just when things are going well for Buck, the telegraph supersedes Perrault’s mail run, forcing him to sell the entire dog sled team. Fortunately for Buck his time with his new owner, a villainous fortune-hunter, played by Dan Stevens, is short lived when troubled drunkard John Thornton (Harrison Ford) saves Buck from being shot.

Interestingly, Ford as Thornton arguably saves the film here from itself, with his poised performance as a man driven to the ends of the earth by his grief over the death of his son. With Buck now by his side, he ventures out into the wilderness to find peace and solitude. But unbeknownst to Thornton, he is being hunted by a vengeful prospector, who believes he was wronged by Thornton. As for the likeable Buck, he too, finds solace and reconnects with his ancestors, by coming into contact with a wolf pack.

Short of spoiling the climactic ending, it’s noteworthy mentioning how the film in many ways is also a wonderful ode to nature. Ford as Thornton sums it up nicely while observing the great expanse of the Yukon with Buck by saying: “We come and go, don’t we — but this is always here.”

In short, director Chris Sanders, of How To Train Your Dragon fame, for my mind has created an exciting old fashioned Disney adventure, he can be proud of. I say this in spite of the criticism he has received from those who say his film is cartoonish, at best. Again, I’m not interested in the debate for instance whether Sanders should have used a real or trained dog on set to play Buck. I believe Sanders did a fairly good job in fulfilling his goals for the film, especially in making CGI Buck come to heel as the film’s protagonist.

1 comment on “Film review: The Call of the Wild.”