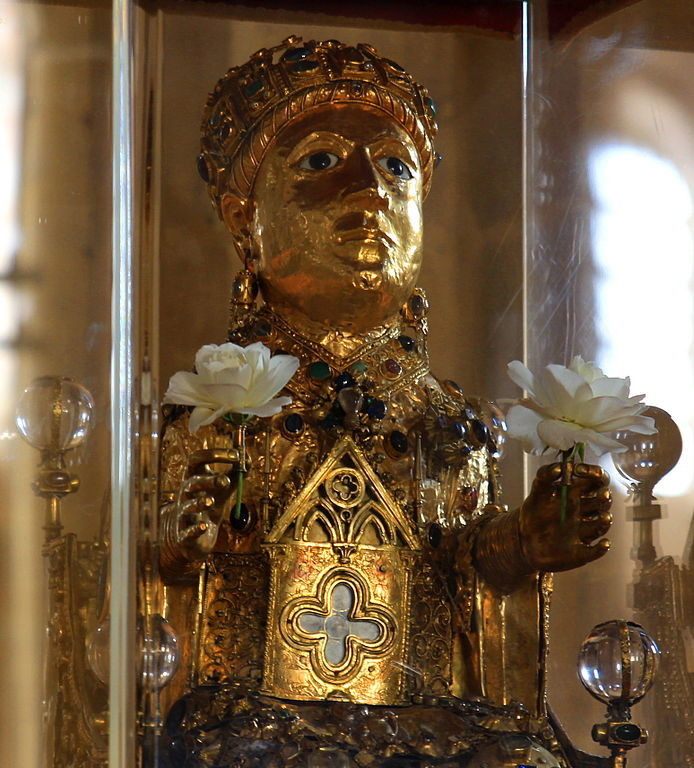 St.Foy, also known as St.Faith, was martyred in 303 CE during the last great persecutions of Christians in the town of Agen. At only 12 or 13 years of age, she was arrested and told to perform pagan sacrifices and renounce her Christian beliefs. On refusal to do so, she was tortured with a red-hot brazier; and when miraculously holy intervention stopped the torture from putting her to death, she was beheaded instead.

In the fifth century, an artist unknown to us, crafted a golden bust of St.Foy to hold her skull. She became revered in her hometown of Agen exhibiting miraculous healing powers and visions until her golden bust and relics were stolen by a monk in a nearby monastery of Conques in 866.

Legend states that the monastery or abbey of Conques, founded in 819, needed an ‘attraction’ to bring to them pilgrams and money. Hence, St.Foy was the perfect choice as an attraction, as she had already exhibited many miraculous powers.

Around a century later, an unknown goldsmith carved a wooden statue of the saint, plated it with gold and jewels and antique Roman cameos, and then mounted her golden bust on top. Ever since, the statue of St.Foy became the principal treasure of Conques.

During the Middle Ages, pilgrams from all over came to Conques to pray and donate to the monastery, begging St.Foy for her intervention, such as, restoring sight to the blind. As her legend grew she also developed a reputation for unusual cures and miracles associated with Faith ‘joca’ for ‘tricks’ or ‘jokes’. One amusing story that comes to mind, involves a knight who once came to her (and if the story is true), seeking a cure for a herniated scotum. She advised him through a vision, to visited a blacksmith who was willing to bash it with a white-hot hammer. Amazingly, he followed her divine instructions, and was committed to this outrageous plan right up until the last moment, when he stumbled backwards, from the hammer’s downward strike – and was miraculously cured from the force of his fall.

St. Foy’s legend also portrayed her as a patron who sometimes turned on those pilgrims who only gave very little in donations to the church. (Another trick or joke?) One such story involves a local ‘captain’, who was too stingy in giving up the wedding ring of his dying wife, who had promised it to St. Foy. Interestingly, sometime after the death of his wife , he remarried and gave the ‘promised’ ring to his second wife, who suddenly began to suffer from great pain and swelling in her fingers. The man and his second wife became so concerned that they rushed to the saints shrine begging St. Foy for her forgiveness. Miraculously when the women by chance happened to sneeze (or blow her nose), the ring fell off without harming her or her fingers.

From an art historical point of view, the golden busts itself has stirred great debate about its ‘manly’ face and expressionless eyes. Some scholars see the face of a Roman emperor and others suggest that it might be the death mask of Charlemagne? In regards to the busts impassive face and expressionless eyes, art historians point to this being the style that we have all come to call Byzantine. Byzantine art was characterized by emotionless faces from the fifth century onwards which found its way across Christian Europe. Some say the saint is in fact dressed and crowned like a Byzantine empress.

Note: This featured article was originally published in 2013, but has been moved to the front pages to further highlight this site’s original content.

Photo credit: The header image of the reliquary statue of St. Foy is used under the Creative Commons Attribution-Share Alike 3.0 license.

3 comments on “Careful what you wish for from the Reliquary Statue of St.Foy”