On her brand new album, Maine-based singer songwriter Liza Victoria aka Lisa/Liza wants us to join her on a journey of self-acceptance, grief and loss; but also on an expedition (almost like a wilderness walk) that leads to wonderful moments of optimism and healing. The album as a whole was written while dealing with chronic illness, making it raw enough to feel Victoria’s genuine disposition. But don’t be fooled by its long shadows of discomfort because beneath it all lies a gorgeous palette of whispery infectious psych-folk musings that feels good for the soul. That said, it’s easy to see how songwriting is still an amazing place of great comfort for this extraordinary individual.

Last year I had the pleasure to talk with Victoria about her album Momentary Glance, this week I caught up with her again to take an in-depth look at her new album Shelter of a Song. Here is some of what we talked about.

Liza, you’ve just released your new album Shelter of a Song. Talk us through the last few years and how it came to fruition, especially against the backdrop of illness?

The album Shelter of a Song came together in 2019 mostly, I recorded each track pretty much one at a time. Though there were maybe a few that were written in pairs. I would write, then record them once they were written. As far as dealing with chronic illness, it was just a large part of my life during this time, I didn’t set out to make a record about illness, so it’s not really that.  As in it’s not the concept or theme to me. But I do feel that some of the difficulty of what I’m going through may come across. I think when I was writing and recording I was feeling stronger and those were periods of respite. I think the backdrop of illness was mostly that I appreciated those moments of feeling well so much more, and it has changed the way I think about a lot of things. Even being outside and immersing myself in nature, was something that I would do when I was feeling well. It created a lot of gratitude, I think, for being able to play and sing and feel well enough to do so. There is a grief I was feeling at that time,  I felt a lot of uncertainty, and that has to go somewhere, I think some of the music may express that.

Did you deliberately shy away from electric elements we found on your 2018 release, Momentary Glance for a more acoustic friendly approach for the new album? Was recording the album in a live environment one of its driving factors?

I think yes, being able to record in the comfort of your home, as a naturally shy person, it just allows me to be myself, so I kind of ended up craving that after releasing my last record.  It’s funny maybe because people still comment on the quietness of my voice and stuff, but to me it sounds so much more confident, and I hear myself more.

If I’m correct Peter Herman helped you record the album, right? How valuable was his engineering expertise in helping you isolate or capture the essence of your sound?

Haha yeah he did. Super valuable. I think having someone you’re comfortable around is so important in any music making capacity. The more comfortable you are with who you’re creating with, the more honest and at home you’re gonna be. He is such a talented and capable musician on his own too, and I think he understands pretty well what I was looking for in the sound. I love making recordings at home.

When we last spoke in 2018 about Momentary Glance, I said that I noticed that you never seem in a rush to breeze through your songs and lyrics. I think you replied that you always try to play and sing with intent. Is the intent the same this time around with the new album? I definitely feel like you still want us to pause and contemplate each song in its moment.

Yes I think there is always intent in my songwriting in the lyrics.  When I listen to songs, I hear lyrics first. So when I write, I want the way I say them to emote, and to have purpose, beyond just melody, for sure. I hope it comes across, that would be cool.

Listening to the album, I also can’t help but feel a connection between you and the listener. The quiet hushed nature of your voice in particular invites a wonderful intimacy. Is that something that you have always instinctively strived for?

I think it’s always been the main importance when I’m writing is to try to communicate something, a feeling, or a moment, that in other parts of my life, I would probably be unable to communicate. I guess in that way, there is naturally a will for connection with the listener in there, that could be heard. 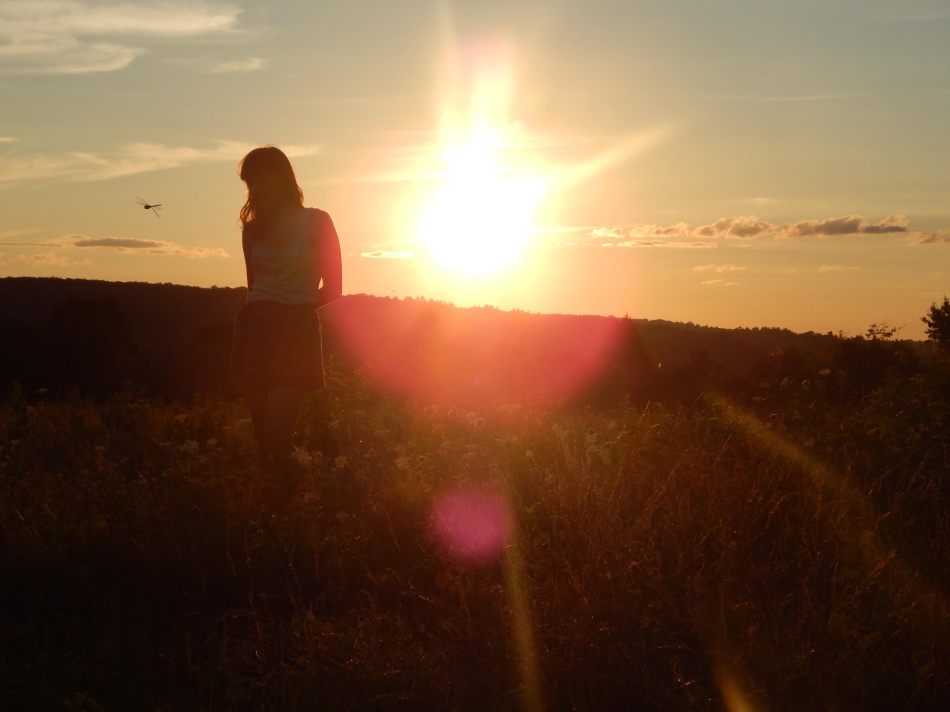 I’d like to briefly talk about your song called Red Leaves. It conjures up a universal feeling of loss we have all felt at some time. Did the inspiration for the song come from your many hikes and walks through Maine’s transformative wilderness?

The inspiration of the song did come in a way from a walk. I was just thinking about how beautiful the fog looked on this particular day ,it had of course a mysterious element to it,  and it sort of stuck in my mind. When I sat down to write the song, i had one line about the fog lifting up the red leaves, the feeling behind it was this feeling of deep loss, yeah. It just felt like a moment in my life that was sort of a movie still, like I needed to gain something from that moment, remember it. What unfolded was something about, my own personal, experience of grief.

One of the songs at the moment that I keep coming back to is The Sun, A Wolf. Could you elaborate a little about how it came to life as a song?

The Sun, A Wolf, I think that one specifically was realizing I was beginning to feel some kind of peace, and maybe also being kind of sad because  that peace had sort of a  temporal nature at that time, and wanting to sort of jot down these nice moments for later.   I remember it was a really nice day, I think late summer, and I just wanted to think about, maybe collect, some kind of nicer elements of that calm into a song. Like a campfire, or a dog rolling in the grass. I see it now kind of holding another meaning, which was like about freeing oneself from feeling bad about emotional gravity  in their life.

Another track that standouts for me is called Dark Alleys. Where were you at the time when this song began to take shape?

This song was the first I wrote on the album.  I wrote it just before a pretty difficult  thing happened in my life, that had nothing to do with the song, but I guess makes it memorable timeline-wise.The song itself is sort of about a commitment to a deep relationship or a friendship, and what that means, good and bad, I guess sort of being by someone’s side. Walking all night til the sun comes up, realizing how just being there, is it, but that it’s also not easy, and that there’s pain there too. I find it difficult to explain my songs, which is usually why I write them in song form I suppose. haha.

With lockdown and Covid running wild in the US, I don’t suppose you’ve really had a chance to perform these songs live yet? Is it still your hope to play them out on the road?

My hope is to perform some of them. I can’t remember the whole album but I think a good amount, I would love to perform live. I really enjoy playing these songs at home, and I’m curious about how an audience might bring out different aspects ,especially now with all this time gone by. Yeah I’d like to!

Finally, where do we find you at the moment?

I am living in Wayne, Maine which is about an hour out of Portland, Maine. I lived in Portland for the last ten years, so it is a big change to live in the country.  When things become safe again for me to be in town, I will remain a part of the Portland music community. I’m  so excited for when shows happen again. it’s hard to dream of touring right now, just because it feels like such a void to not have live music, that it can be a little hard to plan ahead. But for what it’s worth, I can’t wait to tour.  At the same time, I’m glad to have this break in some ways. It’s been necessary for me, and I am learning from- taking  the time away from the patterns and constants we make for ourselves.I have been unemployed  since March. I used to work at a food cooperative in Portland, but my risk factor made that work not possible.  My time hasn’t gone wasted, though it’s been difficult, I’ve felt connections to things both outside myself and in the realm of  self-work, that I feel so relieved that I’ve had this time to work on. I feel more gratitude too, and I’m trying to keep that fore-front.

Lisa/Liza’s latest release Shelter of a Song is available through Orindal Records. You can also check it out on Bandcamp | Spotify | Soundcloud. For more on Lisa/Liza, including tour and music updates, follow her on Facebook and Twitter.

0 comments on “In the shelter of a song: Interview with Lisa/Liza.”