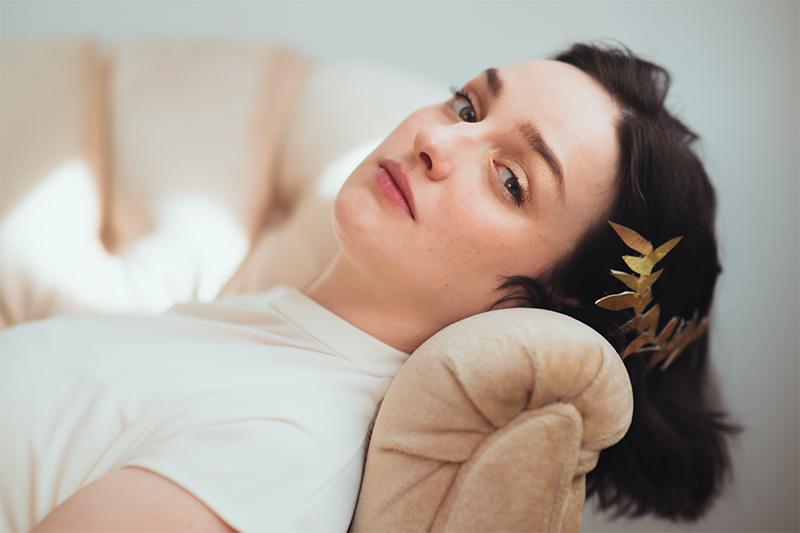 Canada rocks! Why? Because Canada has produced some of the best rock acts worthy of my attention. It’s a big call, I know. From my obsession with old dogs like Neil Young and Bryan Adams to more recently The Beaches and Terra Lightfoot, I am continually on the lookout for great music and or the next interesting act to emerge. More recently I discovered Montreal based singer songwriter Julia Kennific (25) aka Favourite Daughter and her incredible debut single Long Distance, which has been described as “indie pop to hurt your feelings.”

In truth, I’m a sucker for almost anything with a good guitar riff and Favourite Daughter ticks all the right boxes with her melancholic yet energetic debut about the trappings of a long distance relationships with her then-girlfriend.

In an attempt to discover more about Kennific, I recently reached out to talk to her about her musical odyssey (so far) and her spellbinding new track. Here is some of what we talked about.

Julia, you were raised in Toronto but you’re now based in Montreal, is that right? In what ways have the music scenes in these cities influenced your music?

That’s right! I was raised in Oakville, a nearby suburb, but I lived in Toronto proper for three years or so. I went to a lot of shows, since most of my friends were musicians – all kinds of punk, rock, rnb, country – you name it. So in that way, although I wasn’t making a lot of music of my own while I lived there, Toronto really stretched my ears and introduced me to a lot of different genres.  From a financial perspective, Montreal is a much more liveable city – the rent here is significantly more affordable than Toronto, so you can work a part time job and make music your full time focus. That’s really reflected in the music scene here – I often joke that everyone and their mother is in a band in Montreal. But it creates an environment that’s very accessible – lots of musicians means a lot of venues and audience members, and it’s not difficult to book shows and get people to show up to them (pre pandemic, of course).

When did you first start playing guitar? What is it about playing the guitar that you find cathartic?

I picked up an acoustic probably around the age of 12, which was when I also first started writing songs. My dad is a fantastic guitarist and was very encouraging, and I was inspired by how he used it for his own songwriting. I think there’s something about writing with a guitar that’s very insular; it creates a kind of tunnel vision for me, in a good way, where my focus is placed so much on the interaction between my vocal melody, the lyrics and the guitar underneath. I’m not a very technically proficient player (the guitar you hear on Long Distance was tracked by my talented lead player, Sam Eastman), so I focus on writing simple, catchy and effective songs that I can bring to my band and they can build on.

Is it safe to say you started out as a lo-fi rocker in your bedroom or the confines of a garage? Tell us about those early stirrings?

I think we all start there! When I originally started Favourite Daughter, it was with a few other musicians I had met off kijiji and Facebook groups. We wrote our first songs on the floor of the drummer’s bedroom, with her tapping her sticks on the ground or her bedframe, and the guitarist playing unplugged, while I sang along un-mic’d. Those early songs were super different from what I write now, and it didn’t end up working out with my original line-up, but I’m really grateful for the way we started. It helped me build so much confidence as a songwriter. There was something really raw and honest about being 21 and not really knowing what I was doing yet, musically, and the excitement of the possibility of creating.

Your sound summons up a swath of influences. Who are the people that have had a huge impact on you, both musically and personally?

This is always such a hard question to answer! I come from a very diverse musical background, having trained as a classical singer, worked as an actress in musical theatre, and having everything in my Spotify library from vintage country, to 40s jazz, to psych rock, to hyperpop and top 40 hits. Courtney Barnett is massively influential to me. I love the way she writes. I’ve also been very inspired by the folk rock leaning movement by artists like Phoebe Bridgers and Lucy Dacus. Julien Baker’s vulnerable lyricism is something that has really stuck with me. Sonically, there’s notes that bands like The Greeting Committee and The Aces hit between rock and pop that are really exciting to me. At the end of the day, I never sit down and try to write something that sounds like anything or anyone but myself, but if you were to listen to my latest indie rock playlist and put it side by side by my latest songs, you’d be like, “yeah, that makes sense.”

I’m most curious about your moniker or band name Favourite Daughter. Tell us something surprising about how it came to life?

There’s a song by The Vaccines called “I Can’t Quit” with the opening lines “Hanging around, hittin’ the ground, dead in the water/suckin’ it up, f***in’ it up, with a favourite daughter”; I was listening to it once on a commute, and I was like “that’d be a great band name”. So I started thinking about how it related to me and the music I make. I’m the middle child of three girls, so it’s definitely a little cheeky! But there was also a sense of irony to it since there’s been a lot of times in my life where I didn’t feel like I was anyone’s favourite. After high school, I took three years off, and wasn’t singing or writing at all. I felt really lost. Then, when I moved to Montreal to start studying classical voice performance at Concordia University, and started a band, I gained my confidence back. I felt like a favourite again – that’s what music was able to do for me.

Your debut single Long Distance is a bold introduction to your music and vision as a singer-songwriter. That said, there is an intriguing duality to your song: themes of love and loss, upbeat rhythms but despairing lyrics. Did you write this song intentionally or do you think it’s often inevitable with such an honest appraisal of one’s life and or the situations we find ourselves in?

Oh, thank you so much. The duality was definitely intentional – specifically in the hook of the song; “How you doin’, how’s your day been love/what have you been up to, what’s been changing’ up/how’s the weather been on your side”. I love using repetition in songwriting where the meaning changes every time. The first time you hear it, it sounds open and breezy, like I’m smiling. The second time, as the song picks up and the guitars dig in a little more, it sounds more anxious. And then by the final time, after the long awaited explosion of the chorus, it sounds more like a goodbye. The songs that really stick with me as a listener are the ones that surprise me or subvert my expectations. I love jamming out to the vibe of a song, and then catching the lyrics and unexpectedly getting my feelings hurt. So for “Long Distance”, I really wanted to capture that feeling of trying to convince the listener that everything is fine, while something darker is below the surface. It was intentional, but also inevitable. If you approach the way you’re writing in a smart way, and honestly, the listener is going to feel the same things you do as a writer. They might even see themselves in it, which is the ultimate goal for me.

You managed to cultivate such an interesting sound that packs a punch for someone so young. Do you think Long Distance’s indie rock undertones will shape how you tackle future releases?

Thank you! Absolutely. Long Distance is definitely on the more energetic and dancey side of my songs, but I pull inspiration from all over the indie rock and pop spectrums. I’ll always do music that’s guitar forward, since that’s how I write, and my next single I have planned is sonically similar. My first long form release will be a little more exploratory – I have a lot of softer, sweeter, more dreamy songs where I really pull on my choir kid experience to loop a lot of harmonies, so I’m excited to share that side of my sound, too.

What has been your most memorable music moment so far?

Last year in late February, I played a show at Montreal’s venue Quai des Brumes. It was a stressful night for a couple of reasons, one being that the girl I was seeing was coming to see me play for the first time, and it would also be the first show that I’d be playing the song I wrote about her. She was standing in the back, and I don’t think she knew I could see her from on stage, and I got to sneak looks at her while I sang it. Everything in my head went quiet, like a movie. It was like there was no one else in the room. I’ve had a lot of really fun shows, but in that moment, what I wrote meant something to someone, and I got to see it in real time. It doesn’t hurt that she asked me to be her girlfriend later that evening and the date of the show ended up being our anniversary, which makes it extra memorable.

Finally, what’s next for Favourite Daughters?

I’m writing up a storm to put together my first LP, and applying for funding so I can make it a reality. I’m also brainstorming and improving my musicianship so that way, When This Is All Over and people start going to shows again, I can give them a SHOW. I want more instruments in my band, I want costumes, I want pageantry! I want to give people an experience with my music, so while I’m hibernating and writing, I constantly think of what that will look like. 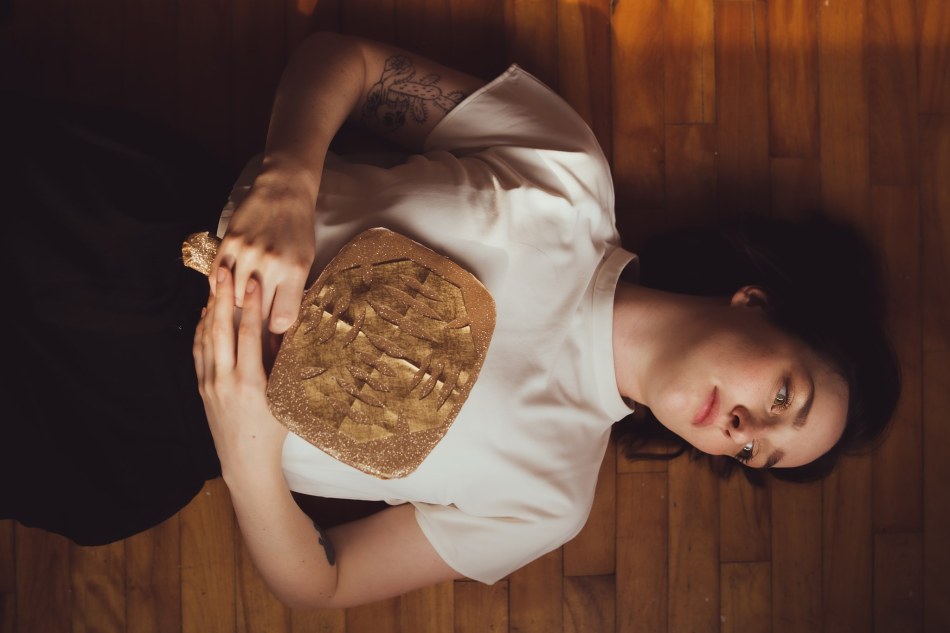 Photo credit: All images used are courtesy of Favourite Daughter. I am not the uploader of the You Tube clip embedded here.