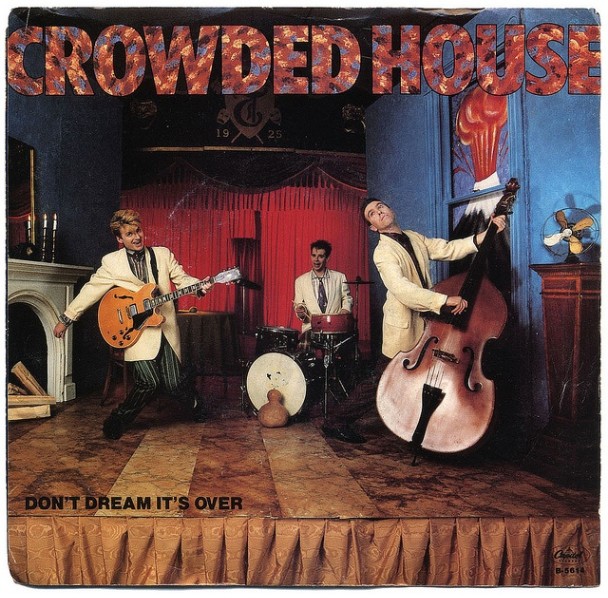 Crowded House’s Don’t Dream It’s Over is one of those songs that if you don’t seriously well-up every time you hear it, you’re simply not human! Its melancholic but hopeful message resonates with people all around the world. I cannot tell you how many times touring bands that come down under have included it in their setlist as a tribute. In America also, I’m repeatedly pleasantly surprised when I hear musicians like Vampire Weekend and Miley Cyrus covering the song. The respect it gets is remarkable, which is something I believe songsmith Neil Finn is totally humbled by, often citing its universal appeal as the reason why it is so loved.

Don’t Dream It’s Over is truly one of Neil Finn’s greatest penned songs. It is often said that the song is in many respects Finn’s answer or tribute to Lennon’s cosmic ballad Across The Universe or more specifically the lyric about a paper cup. That of course doesn’t surprise Neil Finn fans, who are aware of the New Zealander’s admiration for The Beatles and how they went about their business as songwriters. Neil with his brother Tim embraced The Beatles influence early in their careers, first in the eclectic art rock project Split Enz and later in Crowded House, which was formed not long after the demise of Splitz Enz in Melbourne in 1985.

Don’t Dream It’s Over was an unqualified success story for Crowded House. It climbed all the way to number two on the Billboard Hot 100 in 1987 and dominated singles charts in Australia, Canada and went number one in New Zealand in the same year.

The best version of this song, besides the studio album version on their self titled album Crowded House (1986), was recorded in their farewell tour that they played for the last time at the Sydney Opera House. I don’t think there was a dry eye in Sydney way back in November of 1996. More recently a few years ago they played it on the eve of their Aria Hall of Fame induction in 2016 (without the late Paul Hestor) on a webcast to the faithful.

The song has come to represent many things to different people because of Finn’s lyrical ambiguity. From the trappings of success, adversity or self doubt to relationship problems, Don’t Dream It’s Over offers reassurance to those that connect with its message.

On a personal note besides the infectious “Hey now, hey now/ Don’t Dream It’s Over” chorus, the opening verse which comes straight after the the intro riff is something that still to this day gives me the most satisfaction. Moreover, one cannot escape the surreal organ solo from Mitchell Froom in the middle of the song, which for its time (during the ’80s) could have easily been a saxophone solo, but the fact that it wasn’t makes it stand out as a wonderfully emotive moment.