Jane Wieldin was amongst the thick of it when LA punk was born in the 1970’s and she helped propel the all-female new wave band, The Go-Go’s to fame. Beyond her days in The Go-Go’s, she had a modest solo career and famously played Joan Of Arc in the comedy movie Bill And Ted’s Excellent Adventure.

For Jane Wiedlin, it was a case of being in the right place at the right time, during those early days of the drug-fuelled chaos of the late 70’s Hollywood punk scene. It’s a wonder how Jane Wiedlin ever survived! The story goes that she moved to Hollywood to study fashion design in college, to instead end up finding fame as a punk guitarist.

Wiedlin has explained over many years how that period time was one of the most thrilling of her existence. Her apartment building called the Canterbury was literally a short walk from The Masque, one of the most important new clubs for local youth and Los Angeles’ punk subculture. It was here amongst a small tight-knit community of wannabe punk rockers that she honed her skills writing her punk rock poetry and playing rhythm guitar in The Go-Go’s. Prior to joining The Go-Go’s with friend Belinda Carlisle, Jane has admitted to never having written a song or having an ounce of musical ability. She told LA Weekly in 2016 that, “It didn’t matter if you knew what you were doing or you didn’t. You would be met by a group of people (at The Masque) that were going to be intensely supportive of you, even if you sucked.” 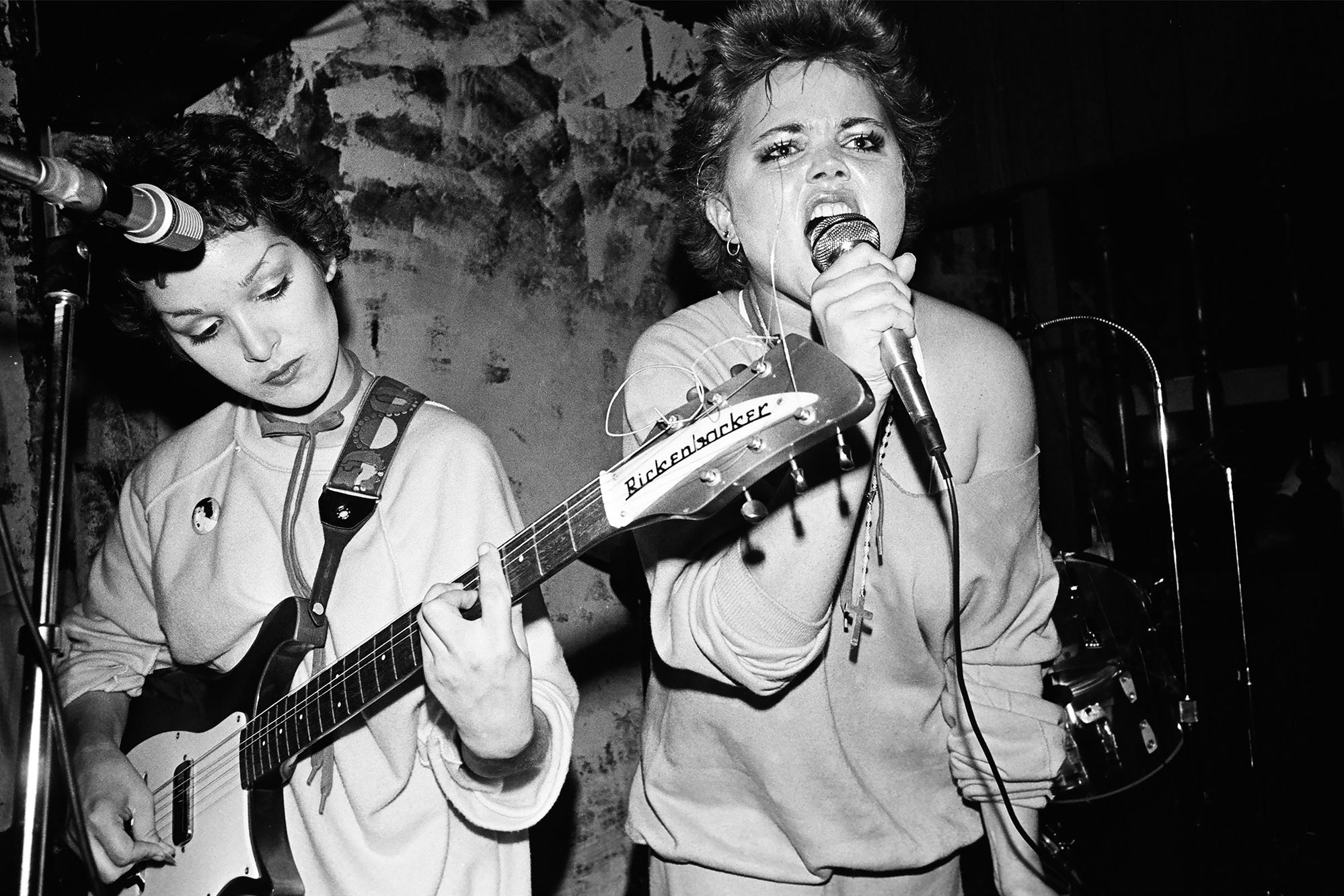 Maybe they did suck just a little in those early days, from what Jane says, but you cannot deny how big they got with their first hits Our Lips Are Sealed and We Got The Beat. Their debut album even reached Number 1 on the Billboard album charts. Interestingly, it still surprises me nowadays that they haven’t been considered as inductees for The Rock & Roll Hall of Fame. Seems like a damn shame, particular because they were the first all-female band that wrote their own songs, and played their own instruments. But there might yet be some good news for the girls who have finally been nominated for the Rock and Roll Hall of Fame this year after 15 years of eligibility. With an announcement later in May 2021, we will see if they are successful.

Over the years I have spoken to many acquaintances (including some expats from Los Angeles) that recall The Go-Go’s in those early days. Although some of their memories are vague, the common thread in all their stories, when I mention I am a Jane Wiedlin fan, is that how quickly she grew into a very capable artist. Her strength as an artist lay in her ability to write strong guitar melodies, but also in particular her ability as a lyricists. In short, she helped fuel much of The Go-Go’s early success particularly alongside fellow guitarist Charlotte Caffey.

My introduction to Jane Wiedlin came not long after she left The Go-Go’s. (Jane left the Go-Go’s in 1985 and the group broke up soon after.)  It was the year 1988 that I distinctly recall listening to American Top 40 with Casey Kasem, when I was introduced to Jane’s first single called Rush Hour from her second solo album Fur (1988). Rush Hour was surprisingly, by most standards, a very catchy song which reflected a lot of the type of music that was produced in the mid to late eighties. New wave, post punk and synth pop was admittedly popular with me during that period, which might explain my instant attraction to Wiedlin’s music. In particular I loved, in between all the synths and sound effects, the rush of guitars (which I am a complete sucker for) and her youthful infectious voice.

Rush Hour propelled Jane up the charts once more. It climbed as high as #9 in the US and #12 in the UK. But as much as it pains me to say, Jane would never really reach the heights of success, she once enjoyed under The Go-Go’s. Her follow-up single Inside A Dream failed to make an impact on the charts and her album Fur (1988), while it had some great tracks, didn’t really have that killer punch it needed to truly carry Jane all the way up the music charts.

Despite its lukewarm reaction from audiences and some harsh criticism from reviewers, I adore Fur as one those straight pop albums of the late 80’s. Particularly clever is the title track Fur, which addresses Weidlin’s lifelong passion, and standpoint on animal rights. The stirring ballad The End Of Love also stands out as one of Jane’s more tortuous intimate moments as a songwriter. While Song Of The Factory, one of the more underappreciated songs on the album, with its catchy synth undercurrent and Jane’s eccentric lyrics, fills the back half of the album with a much-needed boast. Furthermore, despite failing to find an audience with Inside A Dream, it is nonetheless a good pop song about hope and longing.

Jane’s third album Tangled (1990) showed a lot of promise with its fun rousing single World On Fire. A lavish music video accompanied the singles release with Jane as a temptress. I’m dumbfounded it failed to make inroads on the charts in 1990. It should have produced another top 10 hit for her, but for some reason the gods conspired against her.

The album itself had some limited success, but it too was ultimately plagued by a lack of interest from the buying public. World On Fire and the album’s title track Tangled, which appeared on the Pretty Woman soundtrack, starring Richard Gere and Julia Roberts, failed to kick-start big sales, not because they were bad songs, but allegedly because her record label EMI failed to promote it. Jane Wiedlin, of course, was less than impressed, which in turn led to her departure from her record label. Nonetheless, Jane had good reason to be proud of her efforts with Tangled. It was a far more mature album than her previous releases.

Overall, in my opinion, the album is an admirable accomplishment in its ability to convey a message whether it is about longing, regret or freedom. The opening track Rain On Me seductively draws us into Wiedlin’s world with bittersweet melodies accompanied by a satisfying guitar riff. These themes continue throughout the album with lyrics that are fun and sweet (at times) and straightforward enough in what she wants to say. Her two anthemic songs Flowers on The Battle Field and Euphoria are standouts on the album, along with her track Paper Heart in which she co-wrote with Cyndi Lauper. But it is the whimsy World On Fire that reminds me how much fun Jane can have when given the chance.

In the 90’s, Jane’s solo career would float around the fringes of being commercially accepted. (Sporadic Go-Go’s reunions occasionally helped to spark interest in what she was up to.) Does it bother her? We’d have to ask her. I don’t think it matters, a lot of artists do what they do because they love it. Instead of answering to record label wishes, I think artists sometimes create their best and most engaging work when they are truly left to their own devices. The same is true for Jane, who rediscovered her pop punk roots once again in the mid 90’s.

Jane Wiedlin’s returned with an enthusiast new band called FroSTed (The capital ST stands for Star Trek. Apparently Jane is a trekkie from way back!). With the help of an old friend, Go-Go’s guitarist Charlotte Caffey (as a composer/songwriter on several tracks) and three energetic band members (Brian Waters, Sean Demott and Lance Porter), FroSTed hit all the right notes to create Cold (1996), ultimately a well received album. Everything about her collaborative effort, from her wry lyrics to the urgency of rushed guitars highlights Jane’s real love for punk music. Today, it stands as one of those overlooked pop punk treats, lost in the haze of many of the mid nineties big hitters like The Smashing Pumpkins, Foo Fighters, Alanis Morrisette and Green Day. Nonetheless, Jane Wiedlin proved she still had a surprise or two musically up her sleeve.

In 2000, Jane released her fourth studio album Kissproof World with little fanfare, again largely ignored by record buyers. However fans, of course, like myself were treated to yet another edgier album, a lot like Cold, in which Rolling Stone magazine called a “solo tour-de-force by an entrepreneur, an actress and rock goddess.”

However following Kissproof World’s release, Jane put her music career on hold to concentrate on her budding acting career. (She first caught the acting bug playing Joan of Arc in the comedy film Bill & Ted’s Excellent Adventure in 1989). Though Sporadic Go-Go’s reunions helped to spark interest in what she was up to. Interestingly, in 2009 Jane became an ordained minister, which only reaffirmed her chameleon nature.

Following The Go-Go’s farewell tour of 2016, which finally put a close to one of the great all-female bands of all time, Jane Wiedlin together with multi-instrumentalist Pietro Straccia collaborated together to record a new album (Jane’s first studio album since 2000) entitled You’re A Boy Or A Girl (2017). The duo would call themselves Electrodomestico, which is Italian for “appliance” inspired by Straccia’s Italian heritage, and have already been compared to bands such as Metric, The Flaming Lips and The XX. With a flair for theatre, it seems Jane has reinvented herself yet again with a new psych-pop existence. (Accompanying Jane and Pietro’s debut album is an extensive music video catalogue for all of Electrodomestico’s songs. You can check it out HERE.) When you’re listening to their album, its worth remembering this just might be some of Jane Wiedlin’s best work as a songwriter. It’s true, while the mainstream media today has largely ignored the veteran, there is no denying that her excellent adventure continues.

*This article was first published in March 2017. It has been updated here with some additional new commentary.