It is generally agreed that the birth of film making can be traced back to 1895. In its infancy the first moving pictures were rarely more than a few seconds. While Hollywood was yet to make a splash in wooing American audiences, the first cameras for shooting motion pictures was pioneered by the French brothers Auguste and Louis Lumière. Soon after a steady stream of French filmmakers like George Méliès understood the important of this marvellous new invention.

Méliès was born in Paris in 1861. He was first known as a successful stage magician before he helped revolutionise early cinema. It’s fair to say there was a lot of trial and error in developing a camera capable of matching his own imagination. His first films were only a minutes or two long, however he employing enough trickery or screen magic to wow audience back for more. The Lady Vanishes (1896) wherein Melies makes a woman disappear was arguably the first of these sorts of films.

In the first decade of the 20th century, Méliès had perfected his craft to become the first true special effects wizard of early cinema. His short films were becoming more and more ambitious with recognisable storylines and elaborate set pieces, all held together with his ingenious use of special effects. The most iconic set piece or still image we associate with the Frenchman today is without a doubt his crude space rocket in the eye of the Man in the Moon from his film Le voyage dans la Lune, 1902.

It doesn’t come as a surprise that from his extensive 500-plus film career, Le voyage dans la Lune (1902) would become his most famous and beloved film. Better known in English as The Trip to the Moon, it is a wildly imaginative and entertaining film that utilised every trick in the book given movie-makings limited technology at the turn of the century. Yet despite that Méliès succeeds in creating cinemas earliest science-fiction spectacle. 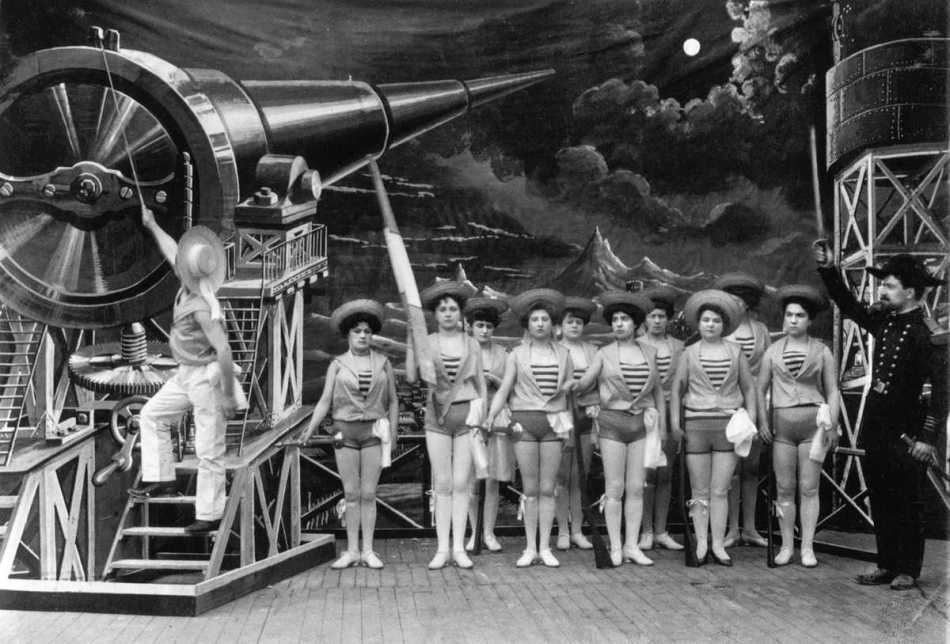 A line of chorus girls hired from the Folies Bergère by George Méliès for the film climatic rocket launch scene.

Inspired by Jules Verne’s novel From the Earth to the Moon, the 12 minute movie opens with a scientific conference, in which its illustrious president Professor Barbenfoullis (played by Méliès himself) tries to persuade his fellow (overacting) colleagues to mount an exhibition to the moon. In short, after succeeding to convince them of his noble exploratory intension, a plan is hatch to shoot a bullet-shaped rocket out of the longest cannon ever made! The sight of a line of chorus girls loading the rocket into the cannon is admitedly quite funny, before it is seconds later fired into the heavens through an opening around thick dark clouds straight at the moon. It is here frame by frame that the moon (and its human face) grows larger as the rocket approaches it. This key scene last only a little over ten seconds or so before the whimsical flight comes to an abrupt halt, landing square in the eye of the Man of the Moon. Soon after the fantastical landscape of the moon and creatures called Selenities add to the excitement and theatre of unexplored space. It’s a curious image that would see future generations daydream of moon exploration. Unfortunately, unlike Méliès film, the real moon landing of Apollo 11 in 1969 might seem a wee bit disappointing. 😉

With the defining image of the moon all but dusted, the film really kicks up a gear with its intrepid space explorers taking a nap. Wait, what!!?? While asleep they of course miss out on all of the excitement of what the cosmos has to offer, before a strange snow shower awakens them. They next set off on an adventure beneath the moon’s surface into a magical world of oversized mushrooms where they are captured by the Selenites. Fearing for their lives, Professor Barbenfoullis moon team decided make a daring escape. In their attempt to get back to their rocket, they use their sophisticated space weapons (umbrellas) to fend off the Selenites. Then finally after pulling their rocket off a cliff, the intrepid space explorers return safely to Earth as heroes.

In short, A Trip to the Moon is an iconic silent film with a wonderful window into a simpler age where anything was possible in film, if you let your imagination run free. Interestingly, Georges Méliès employed all the same tricks and that yearning of adventure and fun with An Impossible Voyage in 1904, where a glorious sun swallows a flying train. He would direct his last film in 1912 before being forced out of business. Parisian surrealists would eventually hail Méliès as an artistic pioneer. He died aged seventy-six in 1938.

Photo Credit: The header movie still image from the film A Trip to the Moon (1902) is presumably owned by the Star Film Company. It appears in the public domain together with the 1902 film via You Tube.