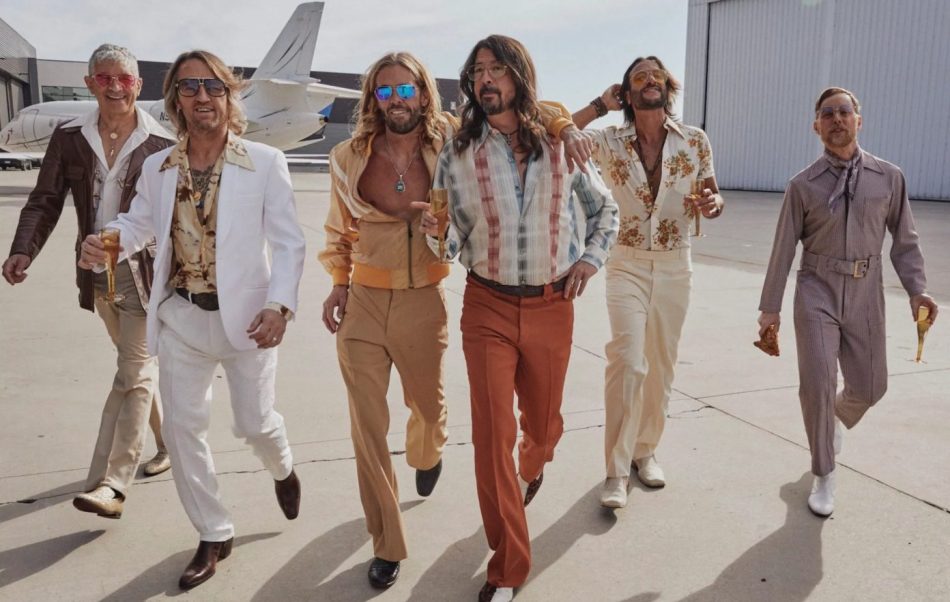 There is a fun question circulating around on the web that says something like ”If you were stuck in an elevator with just one rock star, who would it be?” As much as I would love it to be Paul McCartney or Eddie Vedder, I’m afraid to say Dave Grohl from the Foo Fighters would win hands down. Why? The dude is simply a legend. Moreover he is easy going, very relatable and he tells the best rock stories (and is a great interviewee). And if I am going to continue to dish out praise why not add that he is totally engaging. I’m not just talking about the antics and banter that is created at Foo Fighter shows, there are other moments too. For instance, his very epic drum battle with English ten-year-old Nandi Bushell at the height of last years pandemic, proved that this guy is not only generous but also a genuine human being. Did I mention he is funny? His humour and his ability to poke fun at himself is riotously infectious. The music video for Learn To Fly is just one example of what I’m talking about.

More recently, fronting the Dee Gees (Grohl’s Bee Gees tribute band), the Foo Fighters frontman shows us that side projects can be a lot of fun. The initial inspiration apparently came of the back of the recent HBO Bee Gees documentary. Grohl said earlier this year to the BBC, “Somebody said, ‘Hey, have you seen that Bee Gees documentary?’ And I was like the last person on earth – the only person that hadn’t seen it! So I was like, ‘Why don’t we just do a Bee Gees song?’ And someone was just like, ‘OK… how do you wanna do it?!’ And I said: “Well, let’s do it like the Bee Gees.”

I’m not sure whether we are entirely surprised that the Foo Fighters went on to record there debut Dee Gees album, Hail Satin. It is a wonderful tribute to the Bee Gees, which contains renditions of You Should Be Dancing, Night Fever, Tragedy and More Than A Woman plus the late Andy Gubb’s solo hit Shadow Dancing. Interestingly, Side B features a live set of five songs from the Foo Fighters acclaimed album Medicine At Midnight released earlier this year. (The five songs that make up the second half of the album are Making A Fire, Shame Shame, Waiting On A War, No Son Of Mine and Cloudspotter which were all recorded live at Grohl’s studio in the San Fernando Valley.)

It’s interesting to think that disco was once frowned upon by many rock acts of the 70s. Others of course throughout the mid to late 70s couldn’t resist its calling, though I suspect a lot of it had to do with the commercial value of it. I don’t think acts look at disco in that sense any more. Certainly not the Foo Fighters. A friend of mine recently said that the Foo Fighters have done a great service not only to the Bee Gees rich and enduring legacy but to disco itself. Certainly disco has helped shape the sound of electronic music of today but maybe more importantly the sights and sounds of disco has put a smile on our face. Disco should be celebrated. It’s no mistake that in my recent top ten songs of the 70s that ABBA’s Dancing Queen and the Bee Gees Staying Alive featured prominently and right so.

As for the Foo Fighters and Grohl’s humanitarian spirit, the Dee Gees recently spread some disco love to their long time foes the Westboro Baptist Church in Bonner Springs, Kansas City.

The Calvinist hate group has allegedly had a checked past inciting amongst other things anti-gay rhetoric, particularly outside Foo Fighters concerts. Interestingly in a response to a group of Calvinist protestors last Friday (on the eve of the Foo Fighters show in Bonner Springs) Grohl and the gang donned their 70s best attire and on the back of a flatbed truck broke into a rendition of You Should Be Dancing.

While the performance brought a smile to almost everyone else (going completely viral on several media platforms), moments before the Dee Gees played their free mini concert, Grohl addressed the group with words of love: “Alright now, ladies and gentlemen, I got something to say. Because you know what, I love you. I do! The way I look at it, is that I love everybody. Isn’t that what you’re supposed to do? Can’t you just love everybody? Cause I think it’s about love! That’s what I think, we’re all about love. And you shouldn’t be hating, you know what you should be doing? You should be dancing!”

It goes without saying why wouldn’t you want to be stuck in an elevator with Dave Grohl? The man’s got style! And even a high-pitched falsetto to rival the Bee Gees.

7 comments on “On my stereo this week: ‘You Should Be Dancing’ by The Dee Gees (aka Foo Fighters).”