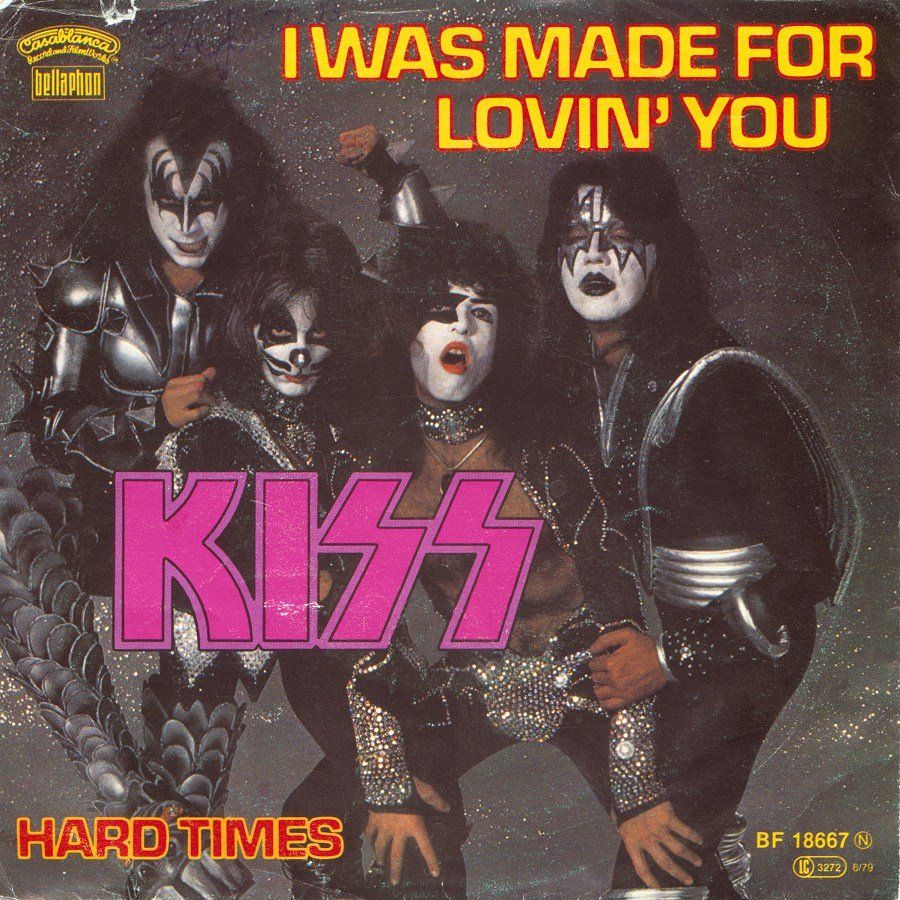 It has been often said that Kiss is one of America’s most decisive rock bands. I get it. You either love or hate them. But there is no denying that there was no one like them in the mid 70s when they started to blow up. Their controversial costumes, make up and live showmanship in the 1970s was second to none. However, by 1980-81 Kiss had all but exhausted their welcome in rock after a troubling slump in sales and popularity. But somehow miraculously via a new lineup and a return to basics approach to rock, Kiss managed to reinvented themselves with Creatures Of The Night, released in 1982.  Since then (maybe even early) fans worldwide have been mesmerised and enraged by all that has happened. Though for the purposes this article let’s stay clear of some of the mud throwing (for now) and instead look at one of the band’s most popular hits – I Was Made For Lovin’ You.

While you will find it nowhere near most hardcore Kiss fans top ten lists, I Was Made For Lovin’ You was in any event a smash hit, peaking at No. 11 in 1979 on the Billboard Hot 100. It was certified Gold in the U.S and sold over one million copies something KISS rarely did throughout their career. (Kiss’s biggest commercial hit in the U.S was Beth which reached #7 on the Billboard Hot 100.) Around the world I Was Made For Lovin’ You was also well received, peaking at No. 1 in Belgium, Canada, France, Netherlands and New Zealand. In Australia, it fell agonisingly short at No 2.

So what is it about IWMFLY that still today has many hardcore fans in a tizzy? It boils down to one simple fact that Kiss had sold out by releasing a disco song that would appeal to a wider commercial audience. Some say it was their ‘jump the shark’ moment.

In the 2001 authorised biography, Kiss: Behind The Mask, Paul Stanley had this to say about the song: “Was IWMFLY calculated? Yeah. Was it calculated to succeed? Yes, ultimately it was. But was that a bad thing? It started as a challenge to myself to see whether I could write in that style instead of meat-and-potatoes rock’n’roll. It was no different from the challenge I gave myself with Hard Luck Woman. The only difference was the style. No apologies for a hit that people worldwide still want to hear and sing along to.”

Musicians have often stepped outside of their comfort zone musically and yielded to experimental phases and genres or movements that were popular during certain decades. In the mid to late 1970s, disco was king outselling rock music in America. It was during this period that the then 27-year-old Paul Stanley was inspired to write his own disco song after a night out dancing at New York’s famous Studio 54. Whether it was as rumoured written as a bet to prove how easy it was to write a disco song or simply Stanley’s curiosity to showcase his maturity as a songwriter, he’s motives I feel will always remain subject to debate especially with fans.

With Paul Stanley taking charge of the lead vocals on IWMFLY, he also shares songwriting credits in conjunction with Desmond Child and Kiss producer Vini Poncia. The story goes that Stanley began hanging out with musician Desmond Child around the time he became interested in writing a disco song. For Child’s it was a happy accident to work with Stanley, since he too had an interest in disco per se, especially dance beats. Later when Stanley brought the song to Poncia, it took a decidedly riotous turn in which Poncia penned the song’s catchy chorus.

Whenever someone asks me how to describe IWMFLY as a song, I always say it’s a little bit of glam rock and a little bit of disco. And in spite of what we say of its disco sensibility, underneath it all still lies an electrifying rock song. On a personal note I especially enjoy Stanley’s falsetto harmonies. Whether he is trying to match Barry Gibb’s piercing falsetto, even if it is done tongue-in-cheek, we’ll have to ask him. Elsewhere Paul Stanley seems to work his ass off on the album version of IWMFLY taking charge of both rhythm guitar and bass duties producing a mesmerising chugging tribal-like riff before announcing “Tonight, I’m gonna give it all to you”. The short but satisfying guitar solo is all Ace Frehley, which still today is emulated by guitar enthusiasts all over. Gene Simmons contribution is strictly backing vocals and Peter Criss is curiously absent (despite appearing in the official music video), leaving drumming duties to stand-in Anton Fig.

In short it’s fair to say IWMFLY over the years has become a fan favourite and a permanent fixture of Kiss live shows. Though as a touring band, Kiss’s days are sorely numbered with their imminent retirement almost upon us. Interestingly, while Gene Simmons has made a point of saying how much he hates being made to sing “Do do do do do”, his support for Stanley has always been unwavering and he does a terrific job, especially with the bass line whenever Kiss played it in concert.

4 comments on “Classic songs: ‘I Was Made For Lovin’ You’ by KISS.”